Majestic sight as tall ships sail on the Delaware River 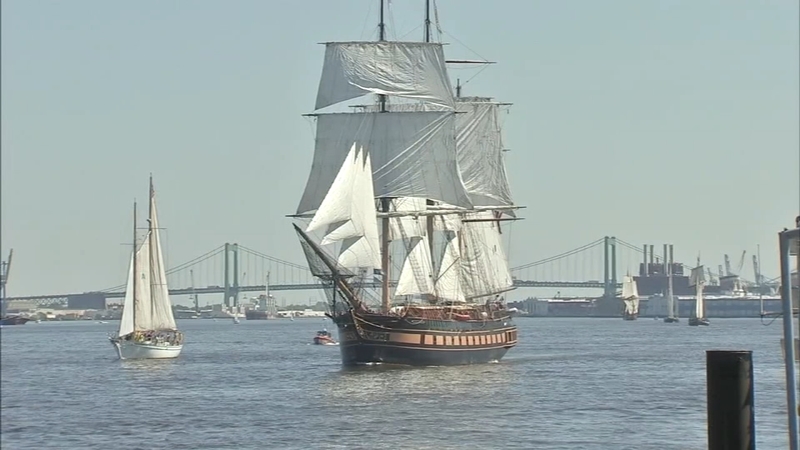 Majestic sight as tall ships sail on the Delaware River

PHILADELPHIA (WPVI) -- A parade of sea-faring beauties is the premiere event of a weekend of festivities including cruises, food and plenty of fun.

It's all part of Sail Philadelphia presented by Bank of America.

The ships made their way up the Delaware River in spectacular fashion on Thursday.

"It's the ship that came in 1638," said Eugene McCoy of Wilmington. "Brought the Swedes to Delaware."

McCoy gets giddy when he talks about the Kalmar Nyckel, the official tall ship of Delaware. He sailed in on it during the parade, and you too can get a first-hand look this weekend.

"So if people come down here to the waterfront, they can hop on board. The waterfront if open for dockside tours Friday to Monday, so four days of tours this Memorial Day weekend," said the captain, Lauren Morgens.

Eleven tail ships set sail Thursday afternoon. It was a majestic sight on the waterfront as they made their way under the Ben Franklin bridge.

Six are docked and will be offering tours. It's a little bit of history and a whole lot of "Wow!"

"Some of the ships have cannons on board. Not with real pirates, but there is a lot of history, an amazing display of all kinds of rigs and ships and the crew. They are so passionate about what they do," said Erin Short of Tall Ships America.

Philadelphia's official tall ship - the Gazela - wasn't able to sail on Thursday, but you can still step on board this weekend

Five of the tall ships are hosting sailaway cruises, a 75-minute tour on the river. On land, it's all about the maritime festival, complete with a Ferris wheel, funnel cake, carnival games, beer gardens and the old-fashioned feel of a waterside celebration