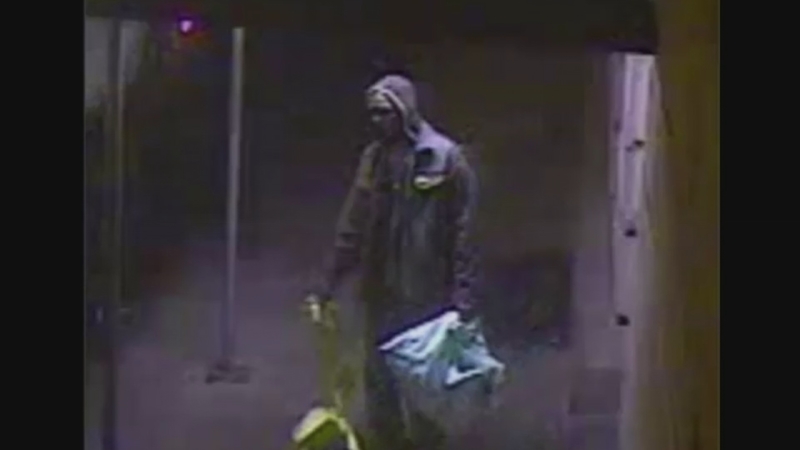 CENTER CITY (WPVI) -- Police have released new surveillance video and a description of the man who heavily damaged a stone staircase leading to the Union League building in Center City Philadelphia.

Union League officials tell Action News the suspect pulled the brass railing off the front stairs of the building, located in the 100 block of South Broad Street, causing
the rest of the stairway to come crumbling down.

The video, complied from several surveillance cameras, shows the suspect taking a piece of the brass railing, then carrying down toward Moravian Street to another location.

"It's on tape that he came up the steps this way at about 3:02 a.m., kind of looked back, came back up to the railing, grabbed at the brass, ripped it down, causing the structure to fully collapse," said Union League spokesperson Erica Martin on Monday.

One of the cameras picks up the man as he wrapped up the railing and tied it to a car in an alley. It appears he's being helped by another man.
EMBED More News Videos

A stone staircase leading to the Union League building in Center City Philadelphia was found heavily damaged on Monday morning.

The prime suspect, seen clearly in several sections of the video, is described as a black male, 40-50 years old, with a thin build, wearing a dark hooded jacket and blue jeans.

Anyone with information about the suspect or the incident is asked to contact Detective Murphy at the Philadelphia Police Central Detective Division: 215-686-3093/3094.

Video from the Action Cam recorded on Monday morning showed the extent of damage that followed the theft. One side of the stone railing is completely in ruins.

"Was this the Incredible Hulk or something? What was this?" said Justin Davis, who works in Center City.

"He had to be nuts," said Alexis Deluca. "Had to be something wrong with him."

The Union League is working to get the staircase fixed as quickly as possible.

"We're in the works of having that taken care of immediately. We have weddings and events come up so it's disappointing for a lot of people," Martin said.

On its website, the Union League touts itself as "a civic and charitable leader in the city."