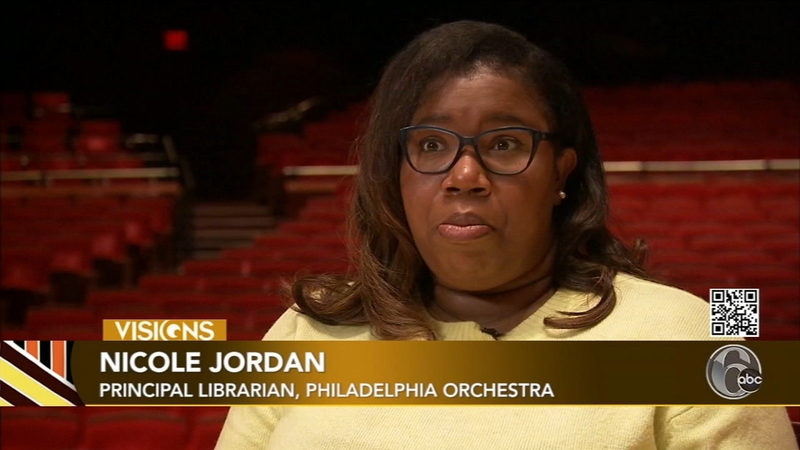 PHILADELPHIA (WPVI) -- For Nicole Jordan, even the chance to be named the Philadelphia Orchestra's new principal librarian was like a dream come true.

The native Philadelphian interned with the orchestra years ago.

She'd been at the Atlanta Symphony Orchestra for a decade and became the ensemble's first Black principal librarian five years ago. She is now the first for the Philadelphia Orchestra as well.

When the job in Philadelphia was posted in February of 2020, she embarked on what would become a months-long auditioning process.

There was a homework round filled with assignments, including recreating a harp part.

There was a test round, where she had to prove her management skills, demonstrate her knowledge of all of the instruments in the ensemble, show a working knowledge of multiple languages and an understanding of budgeting and music rights.

She learned she'd earned the position just one week after George Floyd was murdered and was stunned by the negative reactions to her groundbreaking appointment.

With time, she gained perspective and she wants to use her new platform to show just how much an orchestra librarian actually does.
A highlight of her tenure to date has been helping to revive the music of Florence Price, a Black composer who died in 1953, never achieving the fame she should have.

Boxes of her compositions were discovered in the attic of a Chicago house in 2009 and, during the pandemic, the orchestra worked to get her symphonies performance-ready.

Jordan's role was to go measure by measure, bar by bar, making sure the conductor's score matched the score of each individual musician's score.

It's a tedious process that Jordan says usually takes a few years but they did it in weeks.

And then the orchestra recorded it, and that album is now nominated for a Grammy.