Phillies tied for 1st place after win over Marlins 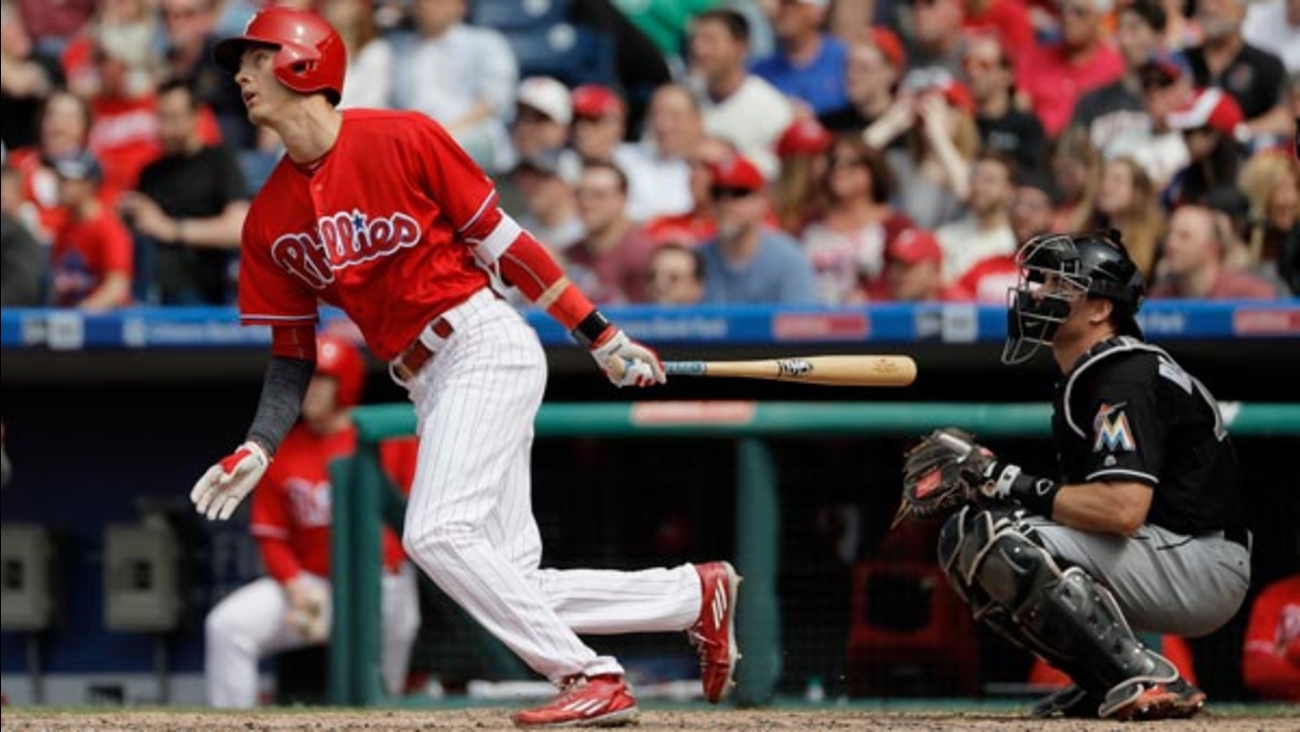 Phillies are in 1st place for the 1st time since September 2011!!! pic.twitter.com/Rk7fJdv0Co

Hellickson (4-2) allowed two runs and five hits, striking out four. He retired 11 in a row at one point and pitched well after a shaky start. Jeanmar Gomez tossed a perfect ninth for his 16th save in 17 tries.

The Phillies won two of three for their seventh series win in the past eight, improving to 24-13 since an 0-4 start.

Miami slugger Giancarlo Stanton struck out four times and has fanned in his past seven at-bats. He was 0 for 10 in the series with nine strikeouts.

Andres Blanco lined an RBI double in the third and Cameron Rupp's two-run single gave the Phillies a 3-2 lead. A fielding error by first baseman Justin Bour on David Lough's grounder started the rally. Cesar Hernandez followed with a bunt single. Blanco then ripped a double to right.

After Ryan Howard struck out, Maikel Franco was intentionally walked. Rupp then hit a sharp single up the middle.

Goeddel went deep in the eighth off Jose Urena.

The Marlins jumped ahead 2-0 in the first on RBI doubles by Christian Yelich and Marcell Ozuna. Derek Dietrich led off with a walk after third baseman Franco let his foul pop fall untouched. Yelich drove a one-out double to left. After Stanton fanned, Ozuna lined a double to left.

Marlins fell to 21-19. Phillies are temporarily tied with Washington for first in the NL East, pending the outcome of the Nationals-Mets game Wednesday night. Philadelphia hasn't been in first since finishing the 2011 season with a franchise-record 102 wins for their fifth straight division title.

Marlins: RHP Edwin Jackson, on the DL since April 19 with a strained right triceps, is likely to return Friday.

Phillies: Rupp was back in the starting lineup after missing three games because of a sore left ankle.

Marlins: After a day off Thursday, LHP Justin Nicolino (2-1, 3.75 ERA) starts the opener of a three-game series vs. Washington on Friday night. He's 0-2 and has given up 11 runs in 10 1/3 innings in two career starts against the Nationals.