PHILADELPHIA (WPVI) -- The Philadelphia Phillies will be increasing seating capacity at Citizens Bank Park starting next week as the team prepares to welcome back a full stadium and tailgating next month.

The team made the announcement on Thursday, two days after Philadelphia laid out its timeline for lifting its COVID-19 restrictions.

Then after the team returns from an away trip, starting on Saturday, June 12, when the Phillies meet the New York Yankees, seating capacity at the ballpark will increase to 100%. This will be in effect for the remainder of the 2021 season. 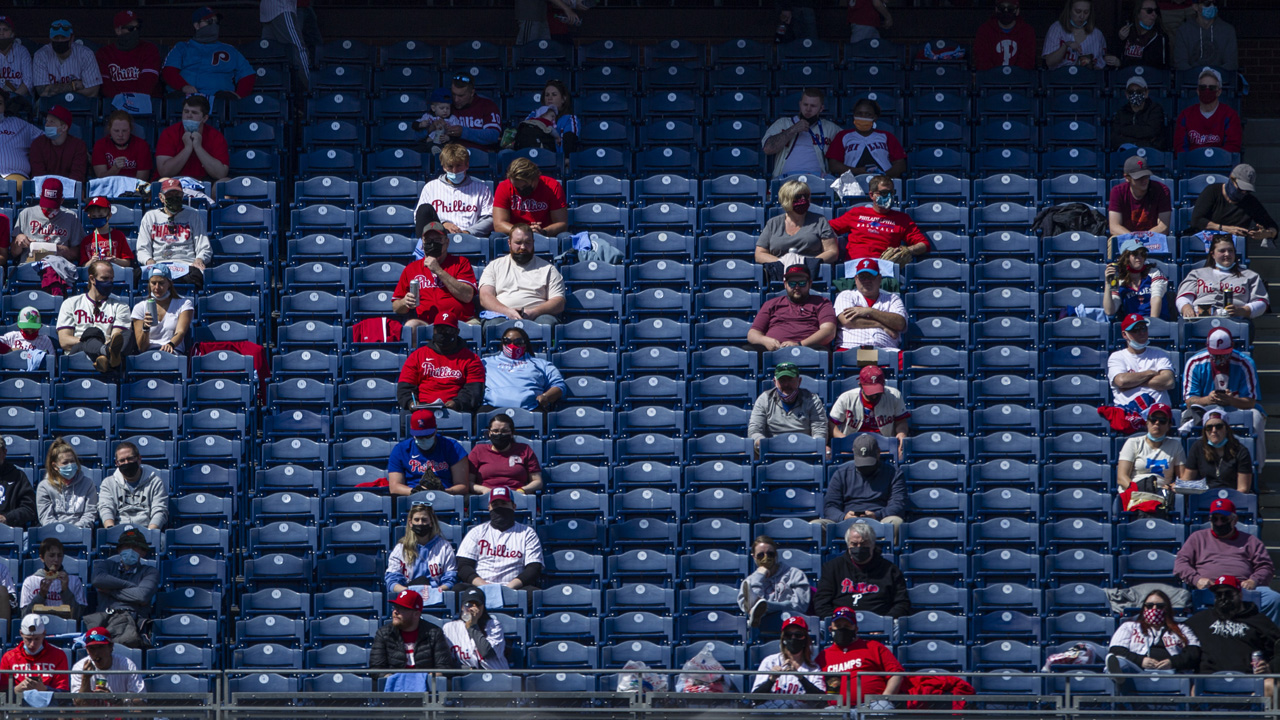 Fans sit socially distanced due to COVID-19 restrictions at Citizens Bank Park during a game between the Braves and the Phillies, Sunday, April 4, 2021, in Philadelphia.

The Phillies say a limited number of seating pods will be available for fans who prefer to remain in a socially-distanced environment.

The Phillies will also be permitting tailgating to return to lots surrounding the ballpark beginning on June 12.

On Tuesday, Philadelphia Health Commissioner Dr. Thomas Farley and Mayor Jim Kenney announced the easing of restrictions in the city will begin on May 21.

This includes outdoor gatherings with fixed seating, such as Citizens Bank Park, being allowed to operate at 50% occupancy. There must also be enforcement of a minimum of three feet of distance between persons of different groups.

Then on June 11, the city will drop all of its "safer at home" restrictions put in place due to the COVID-19 pandemic, except the mask mandate.

"No limits on density or activities anywhere. Only the mask mandate after June 11," said Farley.

Governor Tom Wolf had previously announced the rest of Pennsylvania will lift all COVID-19 restrictions, minus the mask order, on Memorial Day.

Mayor Jim Kenney announced Tuesday afternoon that the City of Philadelphia will drop its "safer at home" restrictions put in place due to the COVID-19 pandemic on June 11.

With those reopening plans announced, the Phillies said they will be "increasing seating capacity effective immediately to welcome more fans into Citizens Bank."

"This is a very exciting time in the City of Philadelphia as we begin to return to some sense of normalcy," Phillies Executive Vice President David Buck said in a press release. "There is nothing better than the energy and enthusiasm that Phillies fans bring to Citizens Bank Park. We look forward to welcoming even more fans back to enjoy the ballpark experience."

The Phillies say season ticket holders will be receiving more information regarding their seating locations in the next several days.

Single-game tickets are currently on sale for games through June 10.

Tickets for all remaining games for the 2021 season will go on sale beginning May 25.