'It is imperative that we not forget that the most effective means of stopping this deadly virus is the vaccine,' Jordan says.
WPVI
By Corey Davis 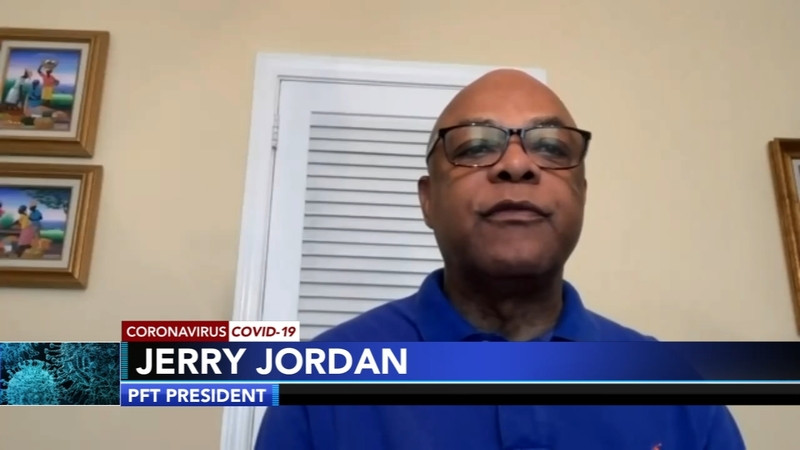 PHILADELPHIA (WPVI) -- Philadelphia city leaders, school district officials and the city's teachers' union have said they support a vaccine mandate for school employees and are open to negotiations.

Philadelphia Federation of Teachers president Jerry Jordan stated in an internal memo that the union would be on board to support a vaccine mandate to help protect children, but stressed that negotiations must happen first.

"It is imperative that we not forget that the most effective means of stopping this deadly virus is the vaccine. The PFT has championed vaccine access even before its release, and we have continued to urge our members to get vaccinated," Jordan said in the memo.

Speaking to Action News on Tuesday, Jordan said he believes it'll be possible to require educators to be vaccinated but he says the union wants that possible mandate to apply to all school district employees.

"We believe that the best thing for all is for everyone to be vaccinated and for those young people who can not be, we as the adults have to be the ones to do to," Jordan said.

The union president also said that when they begin negotiating the terms, they will be pushing for students to be tested weekly for COVID-19, as most kids will be returning to the classroom five days a week.

Right now, the district is only planning to test staff and anyone who may be symptomatic.

And what about if any teachers refuse to be vaccinated even if they don't have religious or any medical restraints?

"We'll have to talk about that," Jordan said.

Philadelphia Mayor Jim Kenney made it clear while speaking at a back to school event Monday that he'll be pushing for a mandate.

Kenney added that there are steps to the process that must be taken first.

"It's an HR issue. You don't just tell people you're going to do this or that without having a discussion with them," Kenney said.

SEE ALSO: Schools in the Philadelphia region grapple with COVID concerns as students get set to return

Philadelphia schools Superintendent Dr. William Hite noted during the same back to school event that the district will be sticking with the current mask mandate and safety precautions as they begin to consider a vaccine mandate for teachers.

"Until we mandate the vaccines, we have to allow them in classrooms. That's why we're testing and requiring everyone to wear masks. As I indicated last week and the week before, this is a complex issue," Hite said.

In the internal memo, the union president said more than 50% of district employees were vaccinated through a program and partnership between the school district and Children's Hospital of Philadelphia.

They believe thousands more were vaccinated outside of the program.

Union leaders pushed hard during the spring to make all teachers eligible for the vaccine as it was still being given out in phases.

They're stressing that a possible vaccine mandate must apply to all employees of the district, not only union members.

They're preparing to push for weekly testing of students, according to the internal memo.

As it stands now, the district's plan currently includes testing of staff and anyone with symptoms as well as a mask mandate.

"Recent information indicates spread amongst young people at higher rates than previously thought, with some becoming very ill. As such, the PFT will continue to follow the science," Jordan said.

At this point, the main requirement in place is that all students, teachers and staff must wear a mask in Philadelphia schools.

In recent days, Dr. Hite has made statements to the media implying that the PFT opposes a vaccine mandate. Today, Dr. Hite indicated the District was in discussions with us. However, the first contact we received about this was just moments ago.

However, let me also be clear that in order to ensure that we are doing all we can to support the health and safety of our students and staff, the PFT supports the position outlined by AFT President Randi Weingarten, and we are fully prepared to support a negotiated vaccine mandate for staff. This will include important exemptions for medical and religious reasons, and as all items related to working conditions, must be implemented utilizing the collective bargaining process. The mandate must include all employees of the District, not just PFT members, including non-represented members.

This union has never, and will never, stand in the way of the health and safety of educators and students alike.

I want to bring this position to you first to inform you. We will be sharing it with the media and elected officials in the coming days.

It is imperative that we not forget that the most effective means of stopping this deadly virus is the vaccine. The PFT has championed vaccine access even before its release, and we have continued to urge our members to get vaccinated. Providing information and ways to get vaccinated has been critical. We pushed hard for our members to get access to the vaccine, and were successful in achieving a District-CHOP partnership that offered the vaccine to every District employee. We have since learned that over 50% of District employees were vaccinated through this program, with thousands more likely vaccinated outside of the program.

We cannot forget that right now, children under the age of 12 are not yet eligible for the vaccine. Recent information indicates spread amongst young people at higher rates than previously thought, with some becoming very ill. As such, the PFT will continue to follow the science. Mitigation measures must also include weekly testing for students (the District plans to only test staff this year) as well as mask mandates.

This week, I will be sharing written testimony with the PA House Democratic Policy Committee on the safe reopening of school buildings, and I will be sure to share that testimony with you. (I cannot attend the hearing in person due to contract negotiations.)

Thank you for all you do every day.