Frankford shooting and crash may be connected: Police 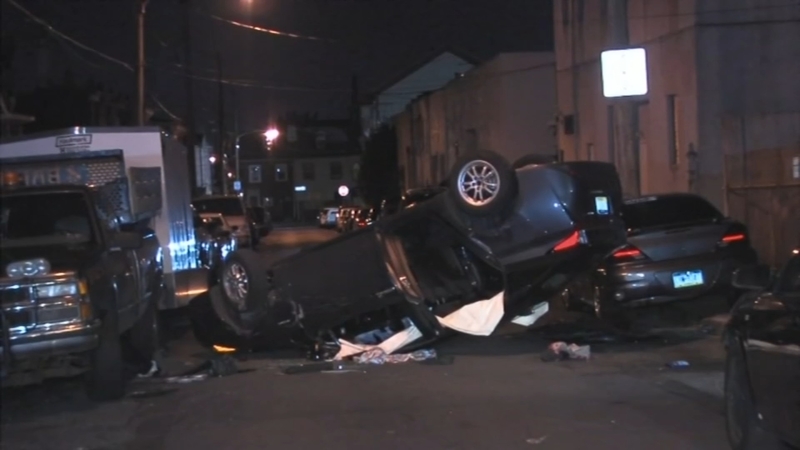 Shooting, crash may be connected in Frankford

PHILADELPHIA (WPVI) -- A man is recovering after being shot and a woman walked away from an overturned vehicle following two possibly connected incidents in the Frankford section of Philadelphia.

The two scenes occurred minutes from one another and within a half a block distance.

Investigators say the victim was found outside of his ex-girlfriend's house, where he used to live with the woman and their three children. However, police say he should not have been there as the ex-girlfriend has a restraining order against him.

When police arrived, they found the man had been shot in the shoulder and leg. He was taken to the hospital in stable condition.

The man told police someone approached him and attempted to rob him. He said the robber did not take anything, but shot him.

"Not only is he a victim of a shooting, he's also being held as a prisoner because he's in wanted status," Small said.

Then, a few minutes later on Salem Street, which is around the corner from the shooting, a Toyota Prius hit a parked vehicle and overturned.

Philadelphia police arrived on the scene to find a woman trying to make her way out of the wreckage.

"There is a 39-year-old female climbing out the passenger door window of this overturned vehicle," Small said.

Police assisted the woman. She suffered scrapes and bruises, but, Small said, she refused medical treatment.

The woman told police she is a Lyft driver and she rents the Prius for her job. She said at the time of the crash, she was off-duty and was a passenger in the vehicle. She had let a friend drive the car.

Two males were also in the vehicle. The woman said all three fled on foot following the crash.

"She's the only one who remains with the vehicle," Small said.

Police say they know the identities of those three people.

Police are investigating if the shooting and crash are connected.

"The fact that the shooting took place just minutes before the auto accident and the streets are right next to each other, there's a possibility the overturned vehicle is related to the shooting of the 34-year-old male," Small said.

Small said they are looking into whether the vehicle was speeding from the shooting scene prior to the crash.