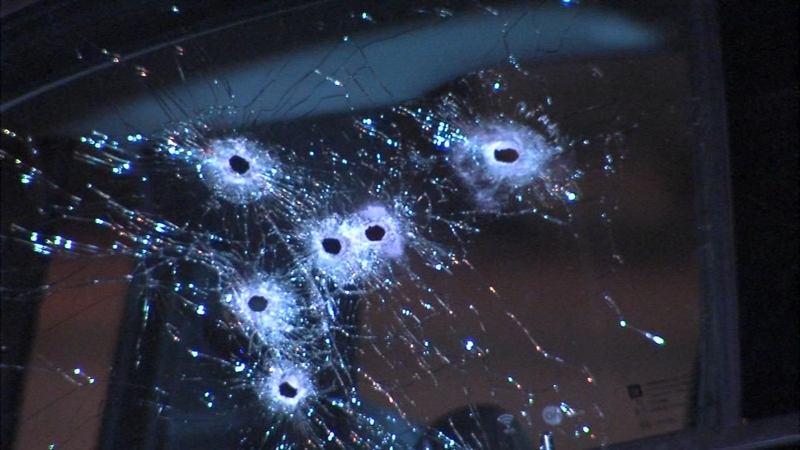 PHILADELPHIA (WPVI) -- It was a violent night in the city of Philadelphia: several people were shot in the span of just four hours late Saturday into early Sunday, two of whom have died.

It began around 11 p.m. Saturday when a 33-year-old man was shot in the back one time on the 2900 block of Hartville Street.

The victim was taken to Temple University Hospital in stable condition.

Around 12:45 a.m. a man and a woman were shot while sitting in a car on the 4900 block of Wayne Avenue in the city's Germantown section.

Police said someone fired off 15 shots into a car.

"I heard it," said Markisha Wheeler. "I was in the house and I heard it."

Police said the male driver managed to drive a short distance with several gunshot wounds, although he struck at least three cars.

The man was taken to Einstein Medical Center with gunshot wounds to his head, chest and arm. He later died from his injuries.

A female passenger in the car was taken to Temple University Hospital in stable condition with a gunshot wound to the foot.

The third incident was just two miles away. Two men were shot as they were sitting in a car in the city's Hunting Park section.

Police said the two men got into an argument with the people in the car next to them when someone in the other car pulled out a rifle and fired. Both men in the first car were injured.

A 25-year-old man with a gunshot wound under his right arm managed to drive to Temple University Hospital.

Police said his 32-year-old passenger died from a gunshot wound to the head.

An hour later, around 3:30 a.m. there was another shooting in Hunting Park.

It happened on the 2200 block of West Clearfield Street.

Police said a 42-year-old man was shot 6 times in his back, buttock and stomach.

He was taken to Temple University Hospital where he is listed in critical condition with a broken leg.

Many in the area said they're fed up with the shootings in the city. David Jones said he's especially upset that the Germantown shooting happened in front of two churches, which was a harsh reality for him to come terms with on a Sunday morning.

"That's horrible, lives are messed up," said Jones. "You know the shooters, the people that got shot, it affects the community, it just affects everybody in a negative way."