Police say one of the suspects shot the employee.
WPVI
By 6abc Digital Staff and Katherine Scott 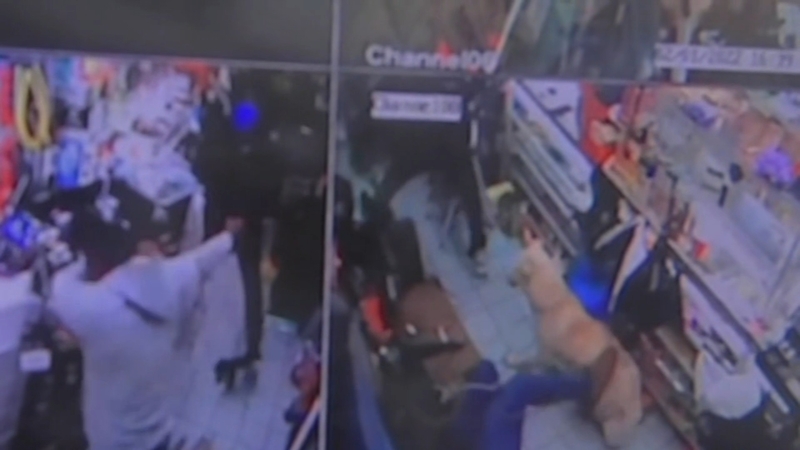 PHILADELPHIA (WPVI) -- The manager of a Philadelphia corner store recounted the terrifying moments of an early morning attempted robbery that ended with both a suspect and a 32-year-old employee in an exchange of gunfire.

It happened around 3:50 a.m. Tuesday inside Big A LLC variety store on the 5500 block of Torresdale Avenue in Wissinoming.

The female clerk was sitting on a couch behind the counter when two armed ale suspects entered the store.

"He had a big gun," said Sammy Aloubehi, the manager, said.

Surveillance video shows one man in a blue cap with a gun rounding the corner of the counter. Seconds later, the second man enters in the store, also with a gun.

"He was pointing the gun to her face like...don't move," Aloubehi said.

It is unclear at this time if one of the suspects or the employee fired first, but both police and the manager say there was an exchange of gunfire.

"As soon as they went behind the counter and pointed the gun at the clerk, that's when the clerk was able to pull her own weapon, I don't know who fired first. but clearly there was a shootout between the two," Philadelphia Police Chief Inspector Scott Small said.

One of the suspects shot the female clerk four times in the upper thigh area.

As the store's dog Sport jumped up at one suspect, the clerk, who was on the couch, raised her arm. She fired from a gun that's kept at the store.

One of the suspect fired back.

The employee and the store manager told police she struck one of the suspects causing him to drop his gun.

"We believe that the reason one of the perpetrators dropped his weapon on the scene is that he may have been struck by gunfire," Small said.

Police say the men fled the store and were last seen running west on Cheltenham Avenue.

The store clerk was taken to Jefferson Torresdale Hospital in critical condition.

"She was a brave, young woman involved in a shootout with two males that were armed with guns. She stood her ground. We're hoping for the best for her," Small said.

Police say the suspects fled the scene. A person matching the description of one of the suspects soon turned up at Temple Hospital, police say.

"About 45 minutes after this incident took place, we were notified that a shooting victim showed up at Temple Hospital. That shooting victim was shot several times," Small said.

Aloubehi says he has a great relationship with the neighborhood and still can't believe this happened.