No trades for Phillies, Amaro says some were close 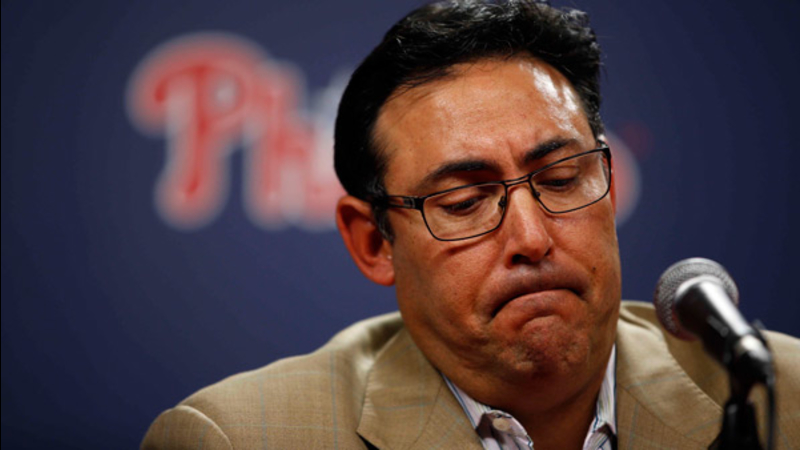 VIDEO: No trades for Phillies

PHILADELPHIA (WPVI) -- While the Major League Baseball trade deadline has passed with no movement from the Philadelphia Phillies, General Manager Ruben Amaro said the team was close to making a few deals.

Speaking to the media Thursday afternoon, Amaro said he was working on possible trades up to the final minutes of the 4:00 p.m. Thursday deadline.

He said the team was close to a few trades, but were not getting enough in return to make a deal.

Amaro said the team was willing to eat money of veteran contracts, but others would not give up their prospects or players.

The Phillies GM said he was surprised other MLB teams were not as aggressive to get deals done, including for outfielder Marlon Byrd.

Analysts at our sister station ESPN weighed in on why the Phillies were unable to move some players.

"This is a combination of contracts, complicated incentives and backend clauses in the back of those contracts, performance, age; everything that could conspire against a team making moves has happened to the Phillies," Jayson Stark said.

Stark said you have to look at who gave the players their contracts.

"That would be this front office," Stark said.

Though he has been given no insurance, Amaro said he thinks he will be general manager come next season.

In a show of support for the general manager, Phillies closer Jonathan Papelbon told reporters prior to tonight's Phillies game, all of the losing the last three years has nothing to do with Amaro.

Papelbon, who was not stunned that nobody on the team was traded, said he was not approached about waiving his own no trade clause and would only waive it to be a closer on another team.

The 33-year-old closer said Amaro told him a few days ago that the Phillies will continue to compete in the next few years.

Echoing that sentiment to reporters, Amaro said don't rule out the Phillies being active in August with waiver deals or in the off-season.

However, former Phillie turned ESPN analyst, John Kruk, focused on the age of the team when discussing the lack of trades.