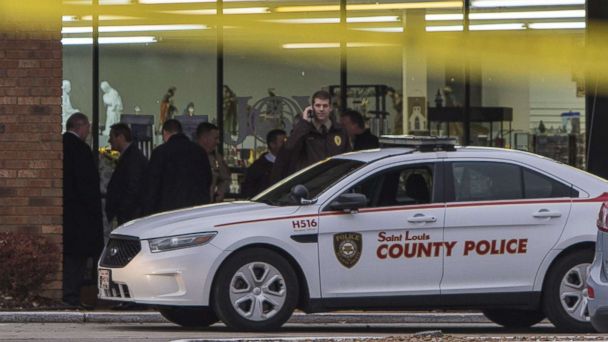 A Missouri man was arrested in connection with a heinous crime spree at a Catholic Supply chain store in St. Louis in which a female customer was fatally shot and at least one other woman was sexually assaulted, officials said.

Thomas Bruce, 53, is now in police custody on 14 charges including first-degree murder, sodomy, kidnapping, burglary, tampering with evidence and armed criminal action, according to the St. Louis County prosecuting attorney.

Bruce entered the store on the west side of St. Louis shortly after 3 p.m. on Monday posing as a customer, left to get a credit card and then returned, displayed a handgun and forced everyone into a back room, police said in a press release.

He ordered the three victims to the back room where he forced them to disrobe at gunpoint, according to a press release from St. Louis County Police. Bruce then allegedly exposed his genitals and demanded each of the victims perform sexual acts on him, police said.

Two of the victims complied, but when mother of three Jamie Schmidt, 53, refused, she was shot in the head by Bruce, police said.

Bruce then ordered the other victims to continue performing sexual acts on him, then he fled the scene, according to police.

Officers swarmed the store -- which sells rosary beads, votive candles, Bibles and other religious supplies -- but by the time officers arrived Bruce was gone.

Bruce is being held on $150,000 cash-only bond. It is unknown if he has retained an attorney.

Officials said that the victims did not know the alleged killer and investigators have not determined a motive for the crime.

"Our hearts go out to the victims of this horrific tragedy at Catholic Supply. We are praying for these victims... We join civic authorities asking for the community's assistance in apprehending the culprit of this crime," Archbishop Robert Carlos of the Archdiocese of St. Louis said in a statement.