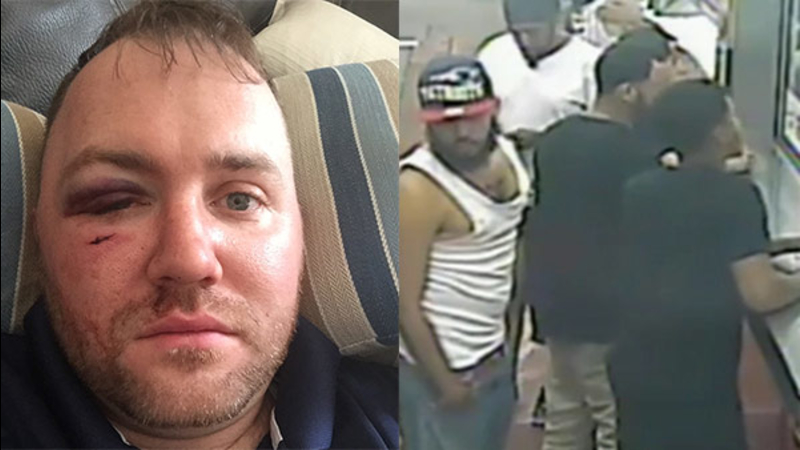 The incident happened back on June 11 outside the cheesesteak landmark on the 1200 block of South 9th Street.

Patrick Kane and his wife say they were out at Geno's Steaks following a wedding.

When one of their friends asked the group of guys to a bum a cigarette, that question somehow triggered the violent brawl.

"I got punched in the nose, then I got punched in the back of the head, I got two upper cuts to the face," Patrick Kane told Action News Monday night.
Kane says the man wearing the backwards baseball cap immediately became verbally aggressive after being asked the question.

Police are searching for several suspects who were caught on camera brutally attacking three people outside Geno's Steaks in South Philadelphia.

"Just snapped and started yelling, 'We belong to ISIS.' He shoved the one girl, hit my wife, the other guy and I tried to jump in. All of a sudden what started as one guy became five, five guys started attacking everybody," Kane said.

Police are searching for several suspects who were caught on camera brutally attacking three people outside Geno's Steaks in South Philadelphia.

The surveillance video doesn't show the attack because police say it was too graphic to release to the public.

The five men police say were behind the assault can be clearly seen in the video, as well as the woman who allegedly drove one of two getaway cars.

Police say both vehicles, a dark-colored pick-up truck and an SUV, had New Jersey plates.

But this isn't the first attack outside the popular Philadelphia staple.

Both teams had played each other in the NHL Winter Classic.

"This was stupid, senseless. It was just an easy question that you could have given an easy answer to. Can I bum a cigarette? Yes or no?" Kane said.

Customers say this could happen anywhere and still feel safe eating at Geno's.