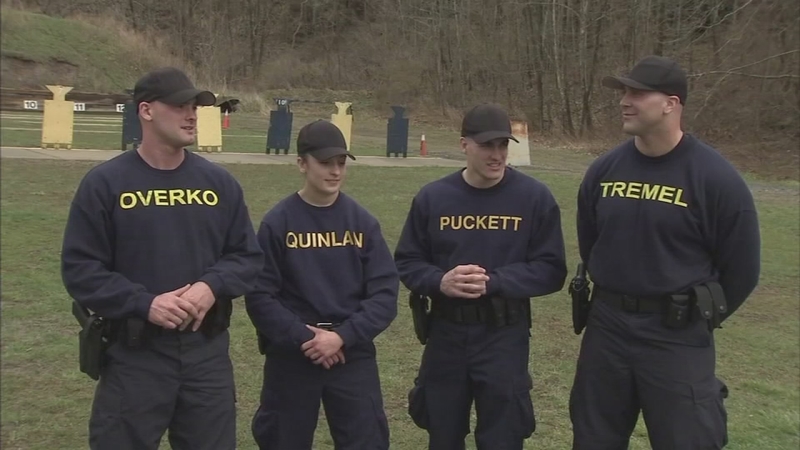 HOPEWELL TWP., N.J. (WPVI) -- Four police officer trainees at the Mercer County Police Academy knew they might someday be called on to save someone's life. They just didn't think it would happen so soon.

Things then went well for a couple minutes, then trouble.

"He was breathing heavy, taking deep breaths and in a lot of distress. So we knew we had to jump into action right away," Quinlan said.

"He stops breathing so we put him on his back. Puckett feels for a pulse. I feel for a pulse. We're like 'oh man, he's got no pulse,' and we immediately started compressions," Overko said.

While two of the recruits called 911 and guided first responders to the scene, the other two switched off performing CPR.

"I was on the phone with dispatch. I informed her that he told us that he had previous heart conditions," Tremmel said.

"When I got tired, Overko took over for me. He did some more cycles and that's when EMS started to arrive," Puckett said.

Officials say the man is still hospitalized, but he's alive thanks to the quick response of these recruits.

"It's what we train for and obviously it was put into motion. It was real time, real life," Police Academy Director Marty Masseroni said.

"I can remember thinking that was probably the longest 10 minutes of my life," Puckett said.

"It's what we signed up to do. Like this is why we wanted to be police officers, to save lives and help people. I feel great. I'm sure these guys do, as well," Overko said.

The hero recruits are due to graduate from the Academy later this month to start their careers at their individual departments.

And they've got an impressive life-saving effort already under their belts.