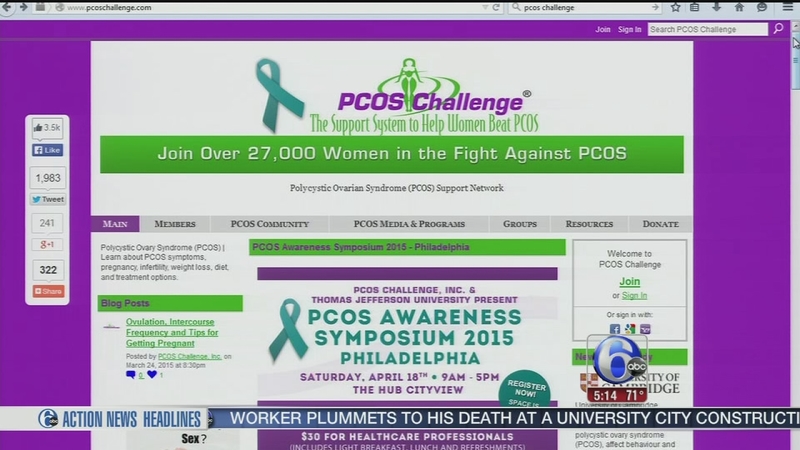 PHILADELPHIA (WPVI) -- A meeting in Philadelphia on Saturday will put the spotlight on polycystic ovary syndrome - or PCOS.

It's a disorder that affects millions of women but many don't know they have it, or don't understand it.

So one woman, diagnosed about seven year ago, decided to help change that.

Sasha Ottey has gone from PCOS patient to patient advocate.

She founded PCOS Challenge, a nationwide group that provides information and support for women with polycystic ovary syndrome.

The disorder is best known for affecting a woman's chance of becoming pregnant.

But after she was diagnosed, Sasha learned her doctor didn't mention other serious effects.

"She didn't tell me about my risk for life-threatening conditions like diabetes, endometrial cancer," said Ottey.

In PCOS, the body produces more insulin, but doesn't use it efficiently.

Women can gain a lot of weight, and half will develop diabetes or pre-diabetes before the age of 40.

It also raises the risk of heart disease and endometrial cancer.

However, many women don't know they have it.

"50 percent of the women with PCOS are going undiagnosed. This is a real problem. They're going to five to seven doctors before being diagnosed. Actually, many women diagnose themselves before their physicians," said Ottey.

So she's teamed up with Dr. Katherine Sherif and other doctors at Jefferson University, for a symposium to educate women - and their doctors - about PCOS.

"The first way is nutrition, the second way is physical activity, the third way is supplements, and the fourth way, if indicated, is medication," said Dr. Sherif.

This symposium is sold out, but 'P-C-O-S Challenge' has more sessions around the country.