The shooting happened around 8:15 p.m. on the 2900 block of Weikel Street in the city's Port Richmond section.
WPVI
By 6abc Digital Staff 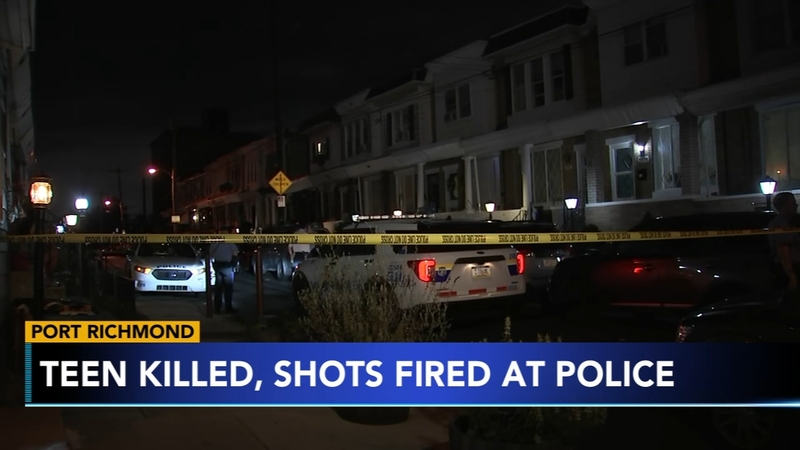 PHILADELPHIA (WPVI) -- A gunman who shot at police officers after opening fire on two people inside a Philadelphia home is behind bars on Thursday night.

It happened around 8:15 p.m. on the 2900 block of Weikel Street in the city's Port Richmond section.

Police say two shooters walked up onto the porch and fired at least eight shots into the home, striking a 19-year-old man and a 49-year-old man.

The 19-year-old victim later died at the hospital. The 49-year-old man, who police say may be the father of the teenager, is listed in critical but stable condition.

Minutes after the gunfire rang out, police responded and a witness was able to alert police to an area where the shooters fled. Soon after, officers found a male suspect running. That's when the suspect started to shoot at officers, according to investigators.

"We believe that our suspect fired at least six shots at two or three uniform police officers. They are very, very lucky, they didn't get hit. They didn't return fire because there was a lot of people out on the streets, but they did chase this individual who was firing shots at them," said Chief Inspector Scott Small with the Philadelphia Police Department.

Police officers were able to find the suspect hiding under a vehicle and bring him into custody.

Police have not identified the suspect or the victims at this time.

A second suspect is still being sought. Anyone with any information is asked to call police at 215-686-TIPS.