Pottstown community grieves over loss of family in house explosion; cause still under investigation

Multiple neighbors tell Action News they've smelled gas in the area for years. Some even made calls to complain about it.
WPVI
By Bryanna Gallagher and 6abc Digital Staff 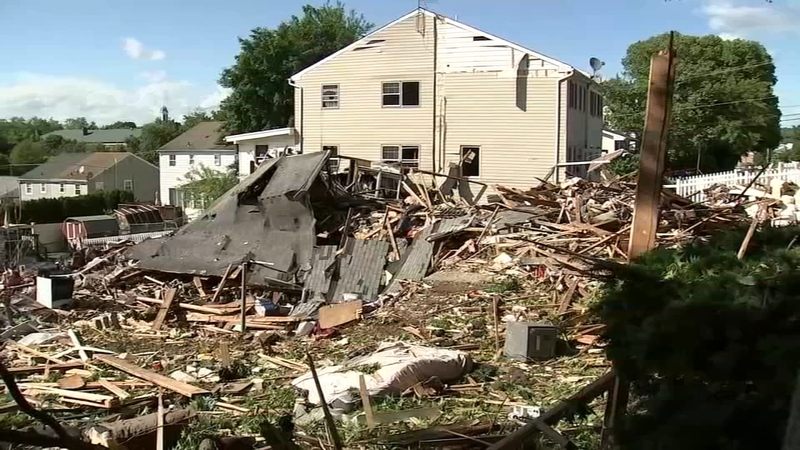 Pottstown community grieves over loss of family in house explosion

POTTSTOWN, Pennsylvania (WPVI) -- The question still remains as to what caused the horrific explosion that shook a Pottstown community and claimed the lives of five people.

Neighbors have been stopping by the site all day, still numb from what happened.

More than 48 hours later, debris and rubble take over where the home once stood on Butler and Hale streets.

Belongings and memories are scattered everywhere.

A woman stopped by to read a passage from the Bible, while a man placed flowers on the fence.

Tandra Rambert's home was right next to the explosion that claimed the lives of four children and their grandmother.

The Pottstown community is still numb from the explosion that claimed the lives of five people, including four children. Neighbors have been coming by all day, some in tears consoling one another. @6abc pic.twitter.com/AbBjbB1W53

"I was sitting right there, and I just heard it all. The windows blown out. I started crawling this way, and my son was back there. I said, 'Get down, get down. I ran outside and saw rubbish and debris everywhere," explained neighbor Tandra Rambert, who lived next door.

She returned Saturday to salvage whatever she could because officials deemed her house a total loss.

"We are completely displaced," said Rambert.

Multiple neighbors tell Action News they've smelled gas in the area for years. Some even made calls to complain about it.

"On and off you walk down the street you could smell gas then the next couple days you couldn't smell it then you'd smell it," said Johnny Corson, who has lived in Pottstown for 30 years.

They said both the home and the adjacent property were not PECO natural gas customers. However, there are natural gas mains as well as PECO customers nearby.

The power company is now reviewing its records for the area, including any reports of gas odors and recent inspections.

A relative of the family has set up a gofundme for the mother and father who were injured during the explosion and remain in the hospital. He says funds will help pay for the funerals of the four children and their grandmother, and medical bills.

A community prayer vigil is planned for Sunday at 7 p.m. at Pottstown High School.