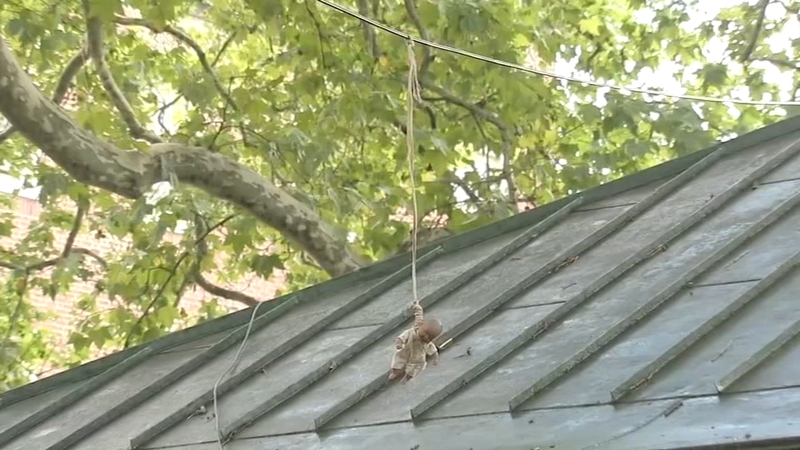 QUEEN VILLAGE (WPVI) -- Two boys placed a black doll hanging from a noose at a Queen Village as a prank, apparently having no idea of the racial implications of their act, officials say.

Authorities released those details Thursday night as residents gathered at the park at 4th and Catherine streets to come together and condemn the atrocity.

About 30 parents, their children, and others gathered at Weccacoe Square playground, creating chalk drawings of love, peace, and harmony in the wake of the incident.

Resident Kerry Milch said, "This is what our community is, we rally together, there is no place for hate here, we're a diverse neighborhood."

Rabbi Gamaliel Espes added, "To see something like this is really disheartening. We talk about Philadelphia being the city of brotherly love, sisterly love and for this to occur in this city and time is inexcusable."

It was earlier in the day that residents looked on in disbelief and disgust at the doll hanging from a tree in the playground.

A recreation worker found the black baby doll hanging from a noose tied to a wire.

Police Commissioner Richard Ross came to the scene to see the act for himself.

"This is the type of behavior that happens that makes you sick, particularly in this day and age and in this city," said Commissioner Ross.

Hours later, Councilman Mark Squilla announced two pre-teen boys under the age of 13, both black and white, came forward Thursday night to say they were responsible for the doll and meant it as a prank.

Squilla said, "They thought they were going to creep people out and make it scary for people as they came into the playground; they succeeded in that, but they said they didn't understand the ramifications of what would happen from it."

Squilla says Pastor Mark Kelly-Tyler of the Mother Bethel AME Church is relieved with the children's story that seems to be corroborated by the surveillance video.

"And so Rev. Tyler felt very comfortable in their story and collaborated with some of the videos that Parks and Recreation had seen of kids playing with the doll earlier, tossing it around," added Squilla.

Resident Joanie Mezelis said, "It makes us feel a little relieved in that sense, also it's still a way for us to celebrate that we can all come together and still speak out about and against racism."

There is also relief that the incident apparently had no relation to the plans to place a memorial at the playground marking it as an historic burial site for one of the city's largest black churches.