More than 40 years after the flag was created, some think it's time for a new one.
WPVI 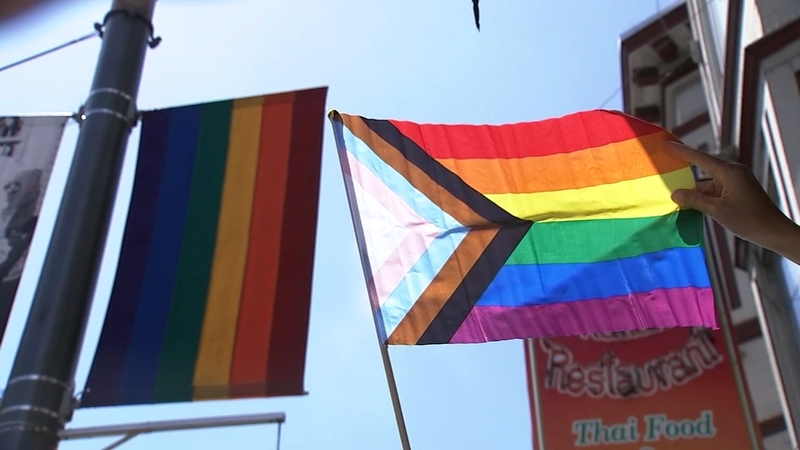 SAN FRANCISCO -- The Rainbow Flag is perhaps the most well-known flag in the world, created in San Francisco. But more than 40 years later, some in the LGBTQ+ community think it's time for a new flag: one that is more inclusive to replace the existing one.

People still stop to look and appreciate the significance of the giant iconic Rainbow Flag in the Castro District. It was created in 1978 by the late Gilbert Baker. The flag was meant to represent all in the LGBTQ+ community.

"Pink is for sex, red is for life, orange for healing, yellow for sun, green for nature, turquoise for magic, blue for serenity and purple for the spirit. I like to think of those elements as in every person," expressed Gilbert who died 30 days after that interview.

As the gay community was rising, then activist Harvey Milk saw the need to create something that would symbolize that community. Milk approached a young artist and sewer from Kansas to fulfill his message of hope.

However, many transgender people don't identify with the rainbow flag.

The flag many say represents everyone in the LGBTQ+ community is called the Progress Pride Flag. The Rainbow colors remain, but Black and Brown and transgender people are represented with distinct colors.

"We want to feel accepted when we look at the flag as well," said Ivory Smith also of the Transgender District.

Some in San Francisco's Castro LGBTQ Cultural District say it may be time to switch the Rainbow Flag for the Progress Pride Flag, even on Market and Castro Streets where it has been memorialized.

"The flag itself is a symbol of pride, the right to love and hope," said Kathy Amendola, an community activist who offers gay culture tours. She opposes changing the flag.

"This is not progress, this is cultural eradication," she added.

The Castro LGBTQ Cultural District is asking the public to weigh in. They will have a community survey on their Facebook page.

For Pride Month 2021, we're celebrating members of the transgender community as a part of a special series called "Our America: Who I'm Meant to Be."