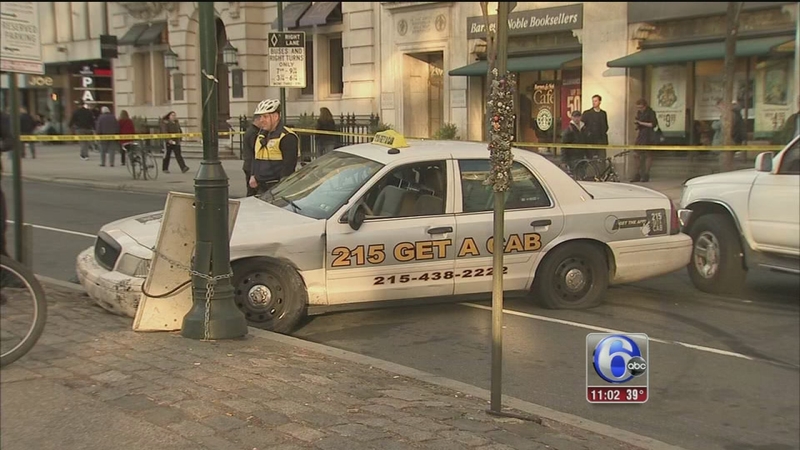 RITTENHOUSE SQUARE (WPVI) -- Residents and those passing by Rittenhouse Square went into action to stop a naked man who crashed after allegedly driving through the park in a stolen cab.

Viewer video of residents and passersby trying to restrain the man, who allegedly stole this cab, as they wait for police to arrive @6abc pic.twitter.com/wCn4S98Ijt

The driver weaved through the popular Center City destination around 3:30 p.m. Monday before crashing at 18th and Walnut streets.

Here's the cab that a man allegedly stole and drove through Rittenhouse Sq before crashing on Walnut near 18th @6abc pic.twitter.com/2Xl3bYmlQ8

"I ran up and grabbed the wheel and he was still trying to fight," witness Brandon Thompson told Action News.

Thompson was one of the handful of good Samaritans who helped end the man's dangerous joyride.

"The only thing on my mind was that he needed to be stopped," Thompson said.

Alyssa Wolfington told Action News she saw the man just minutes before around the corner.

"The man was originally standing in front his apartment building yelling," Wolfington said.

Police say the man then carjacked cab driver Michael Emmanuel who was dropping off a customer.

"When she paid me, he came to the passenger side door, and grabbed the lady from her hair, from her collar, and dragged her on the street," Emmanuel said.

Jumping to help the customer, Emmanuel says he left his car unattended.

"He took off his clothes, opened the door, ran in the car, and drove off," Emmanuel said.

Video from Linus Schill/BLT Films of a cab careening through Rittenhoouse Suare.

Pedestrians like Kyra Howell had to dart for cover.

"I honestly saw my life flash before my eyes," Howell said.

Police have opened one lane of Walnut at 18th to allow rush hour traffic through. Waiting to get cab towed @6abc pic.twitter.com/X4oJsOgulD

Sources say the man may suffer from mental health illness, but residents are grateful this didn't end worse.

"It's crazy, it was crazy. Thank God it wasn't 5:30 and people were picking their kids up from school," witness Emily Goodman said.