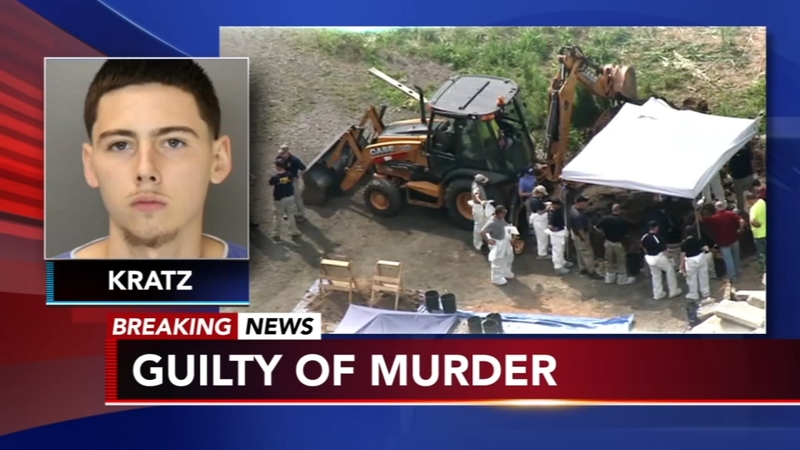 DOYLESTOWN, Pennsylvania -- A jury on Friday convicted a man in the slayings of three young men whose bodies were found buried at a farm in Solebury, Bucks County.

Sean Kratz, 22, was convicted of first-degree murder, second degree murder and robbery in the death of Dean Finocchiaro.

He was also convicted of two counts of voluntary manslaughter in the deaths of Thomas Meo and Mark Sturgis, and abuse of a corpse for all three victims.

The jury, which deliberated nearly 18 hours over three days, must now decide on a sentence of death or life in prison. The jury will return for the penalty phase on Monday.

Kratz went to trial after rejecting an earlier plea deal. His cousin, 22-year-old Cosmo DiNardo, pleaded guilty and was sentenced to life in prison.

Bucks County prosecutors said DiNardo lured the victims to his family's Solebury farm in 2017 as part of a robbery plot. They said Kratz shot one man in the head and served as a lookout while DiNardo killed the others.

The victims' bodies were burned in a makeshift pig roaster and buried in a 12-foot-deep (3.5-meter-deep) hole.

Prosecutors said the victims went to the farm to buy marijuana when they were killed. Kratz and DiNardo were "on a mission to kill, rob, burn and bury bodies," Assistant District Attorney Kate Kohler told jurors.

She rejected the defense claim that Kratz was coerced by DiNardo, saying he could have called for help or even turned the gun on his cousin. She called the slayings "just something fun to do that day because they could."

One of the victims survived his gunshot wound, but Kratz said DiNardo then crushed him with a backhoe.

After the killings, prosecutors said, Kratz and DiNardo went for cheesesteaks.


There was a possibility that DiNardo would testify at his cousin's trial, but prosecutors said he rejected their subpoena. Kratz did not take the stand in his own defense.

During the trial, jurors heard a recorded confession that Kratz made as he was preparing to plead guilty to third-degree murder. Kratz wound up rejecting the offer, which would have put him in prison for at least 59 years for the crimes.