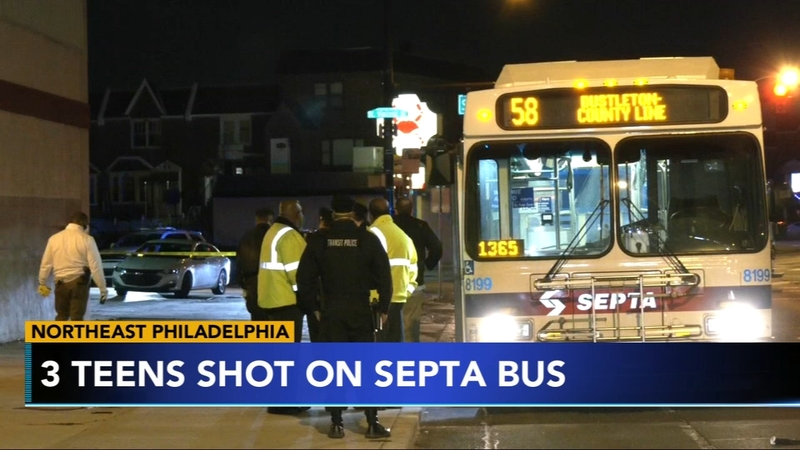 PHILADELPHIA (WPVI) -- Police said a man is claiming self-defense after shooting three teens while riding on a SEPTA bus in Northeast Philadelphia Thursday.

Investigators said the three teenagers were in a physical altercation with the shooter while riding on the Route 58 SEPTA bus around 1 a.m.

The bus came to a stop on Bustleton Avenue at St. Vincent Street, which isn't far from Roosevelt Mall.

Police are still working to determine what led to the altercation and shooting. Investigators said the three teens approached a 24-year-old man who was sitting in the back of the bus. For some reason, they got into a physical altercation, and during that time police said the man ended up shooting each of the teens.

Officers transported a 16-year-old who was shot to Jefferson Torresdale Hospital with a gunshot wound to his left thigh. He was listed in stable condition.

Officers placed a tourniquet on a 17-year-old boy who was shot and transported him to Albert Einstein Medical Center with a gunshot wound to his right knee. He is listed in stable condition.

A 15-year-old boy was transported by officers to Einstein Medical Center with a gunshot wound to his right thigh and one to his right buttocks. He is listed in stable condition.

Police said the 24-year-old shooter was transported to the Northeast Detective Division for further investigation. A weapon was recovered. Investigators also said the man had a concealed carry permit and showed officers those credentials.

"There were about three other people on the bus at the time who were not involved. Those three individuals were transported to Northeast Detectives as witnesses. The 35-year-old bus driver was not injured and not involved. He was driving the bus when it happened," according to Philadelphia Police Chief Inspector Scott Small.

SEPTA officials are still implementing measures of social distancing by asking everyone to only ride if it's absolutely necessary during the coronavirus outbreak.