There is no word yet on the victim's condition at this time.
WPVI
By 6abc Digital Staff and Trish Hartman 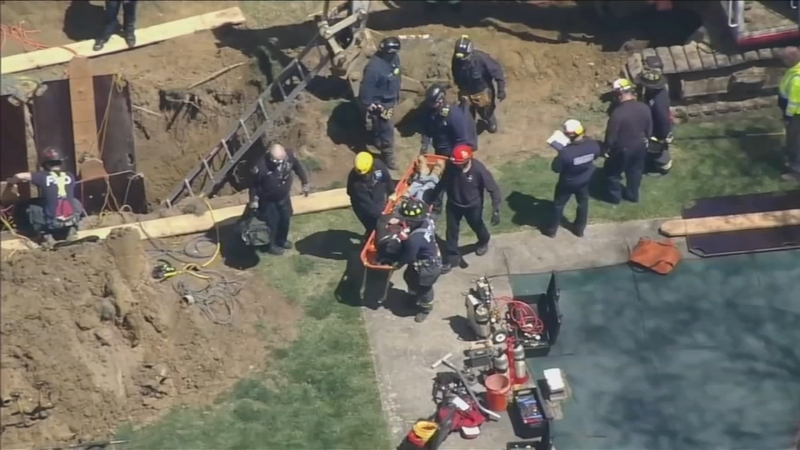 The incident happened just before 11:30 a.m. on the 100 block of Waverly Avenue.

Officials say the construction worker fell down the septic tank hole in a residential backyard and became stuck in the ground.

Chopper 6 was overhead as rescue crews were eventually able to help the victim escape.

"The gentleman had been hit in the head by the dirt or a rock or something they were digging out and fell into the hole," said Mount Laurel police officer Kyle Gardner.

Crews worked to secure the hole before going in to assess the patient.

"We drop two panels in on either side of the patient to make sure there's no spoils or any collapse that could fall onto the patient," said Deputy Chief Todd Evans of the Mount Laurel Fire Department.

Two rescuers in harnesses went down, loaded the patient onto a board and then into a military-style basket, pulling him out around noon.

Police say the 55-year-old man from Williamstown was flown to Cooper University Hospital for further evaluation.

Rescuers say he was awake when he was transported.

The victim's name and condition have not been released.

Firefighters say incidents like this are why they continually train on various rescue situations, including trench rescues and collapse.

"From a patient outcomes standpoint and an incident outcome standpoint, it's exactly what we train for and what we prepare for our whole career," said Evans.

Action News reached out to Lindsay Construction Wednesday, which declined to comment.

A representative from the Occupational Safety and Health Administration was on the scene Wednesday afternoon.

OSHA has six months to finish the investigation and release its findings.