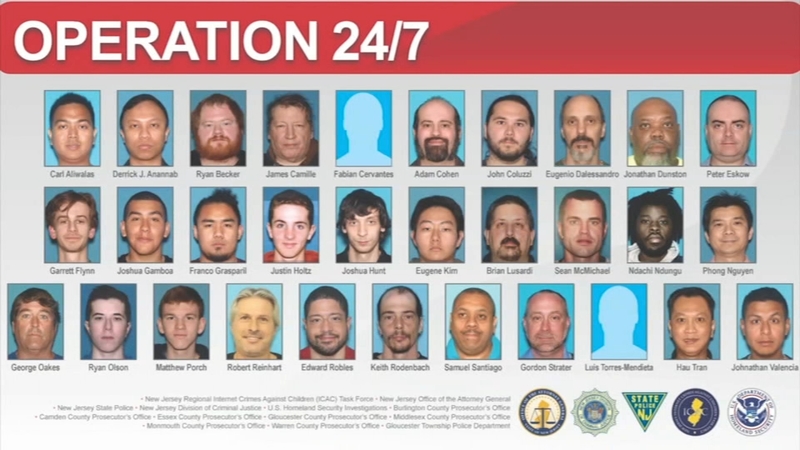 The effort was called Operation 24/7, with more than a dozen agencies targeting online child predators in the Garden State.

It's a problem that officials say has only grown during the pandemic.

Among the dozens who were arrested was Ryan Olson of Williamstown, New Jersey.

"We allege Olson solicited underage girls on social media to play what he called a game, offering prizes and money in exchange for sexually explicit photos and videos of his victims," said New Jersey Attorney General Gurbir Grewal during a virtual press conference Wednesday afternoon.

Also arrested: Robert Reinhart of Telford, Pa., who police say traveled to West Deptford, N.J. to meet up with a 14-year-old girl who was actually an undercover detective.

Authorities say cases like these spiked during the pandemic last year and continue to cause alarm as minors spend more time on devices.

"The state police received 39% more tips in just the first six months of 2021 than they received for the entire year of 2019," said Grewal.

The charges among the 31 men range from sexual assault to possession or distribution of child rape videos.

Grewal and county prosecutors urged parents and children to educate themselves about the dangers of social media, flagging apps and games that are routinely used by predators.

They also encouraged parents to have honest conversations with their kids.

"It's even more vital that you maintain the type of relationship with your children in which they feel that they can come to you if they are approached by someone online," said Camden County Prosecutor Jill Mayer.

We found parents who enforce strict rules around what their teens can do online.

"My children are only allowed to talk to and be friends with family members or maybe friends that are mine, that are close family friends," said Gina Caldwell of Salem, N.J.

The crime of assaulting someone by strangling them will be punishable by up to 10 years in prison under a new law New Jersey Gov. Phil Murphy has signed.

Authorities also suggest checking your child's browser history and keeping computers and phones in a central location in the house, especially at night.

To report suspected predatory behavior, call 911 or contact the National Center for Missing and Exploited Children at 1-800-843-5678 or report.cybertip.org