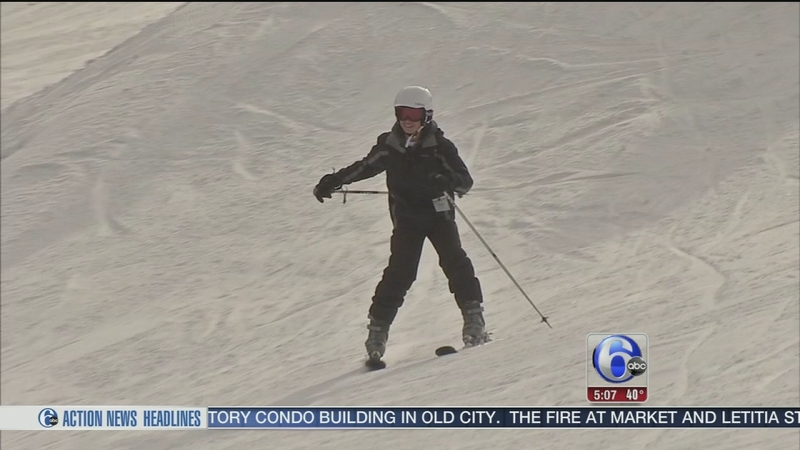 POCONOS (WPVI) -- Tuesday's snow was a welcome sight for ski resorts in our area after a very dry winter so far.

Our day started up in the Poconos where it was cold and it was snowing at Big Boulder Park in Lake Harmony.

Officials say they've been able to rebound after last year's lackluster ski season which was hampered by unusually warm conditions.

"Weekends have been really, really busy. Compared to last year, it would be like apples to oranges. It's just infinitely better," Pat Morgan of Big Boulder Park said.

About 50 miles to the south paints an entirely different picture.

Officials from Bear Creek Ski Resort in Macungie say that while they are doing better than last year, the warm weather we've seen over the past few weeks has made things very difficult.

In fact, they just reopened the mountain this past weekend after being forced to shut it down for six days last week due to a lack of snow.

"MLK Monday, basically the next day after that is when the weather really warmed up. We had the nor'easter come through with some heavy rains, and then sustained warm temperatures, which really put a hurting on the conditions," Jeff Zellner of Bear Creek said.

While the machine-made snow helps extend the ski season in this part of the country, skiers and snowboarders Action News spoke with admit, if there is no snow in the backyard, hitting the slopes often becomes an afterthought.

"With how the winter's been this year, it's cool to come here and see snow at all, cause in Levittown it barely snowed once this year. It's nice to come out and see, whether it's fake snow or not. It gets you in the mood when you get here," Justin Smith of Levittown, Pa. said.