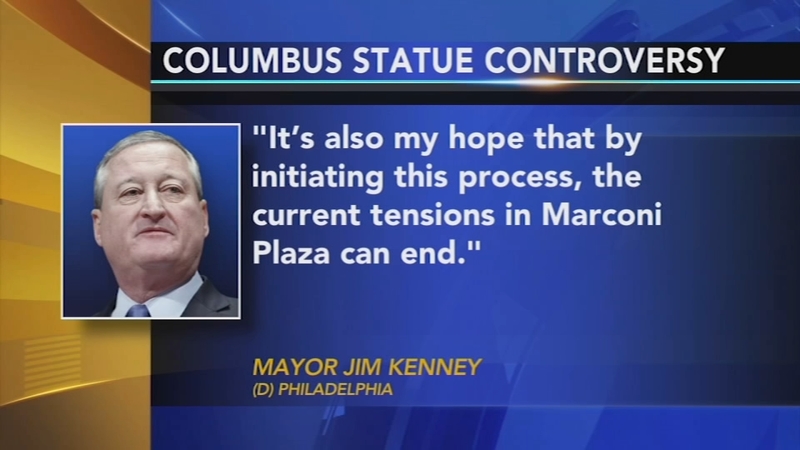 The city previously said there were no plans to remove the statue, which drew a crowd of people who said they were protecting it over the weekend.

Barricades remained around the statue at Marconi Plaza on Monday, and there was a smaller crowd.

Mayor Jim Kenney announced plans to initiate a public process to consider the future of the Christopher Columbus statue.

It was a different scene on Saturday and Sunday, where a mixture of residents, protesters, spectators and police converged.

Some residents claim the statue is an important part of Italian-American heritage and should be left alone.

Others were denouncing Columbus, calling him a symbol of hate and oppression.

Statues of Columbus have been removed in other cities, including Camden, New Jersey and Wilmington, Delaware.

Columbus statues in Camden, New Jersey and Wilmington, Delaware have been taken down.

One the things that quickly garnered attention here over the weekend: a small contingency of residents armed with weapons standing guard over the statue.

Tension appeared to boil over near the statue on Sunday. Some in the group were armed with weapons in an effort to prevent the statue from being removed or vandalized.

"This here represents something to me, my Italian history," said one of the protesters. As day turned to night, some groups appeared to clash with residents.

Around 7 p.m., a group left the statue to stand in front of the home they suspected Mayor Jim Kenney may have been visiting.

It comes as the mayor addressed what has been unfolding since Saturday, tweeting in part all vigilantism is inappropriate, adding the individuals bring more danger to themselves and the city.

We are aware of the groups of armed individuals “protecting” the Columbus statue in Marconi Plaza. All vigilantism is inappropriate, and these individuals only bring more danger to themselves and the city.

He also noted awareness of an "assault caught on videotape" and said the incident was being investigated.

We are also aware of an apparent assault caught on video tape, as well as possible restrictions placed on journalists filming the event. These incidents are under investigation at this time.

On Monday night, Kenney said no decision has been made on whether the city will remove the statue. A boxing apparatus will be installed around the statue on Tuesday in order to preserve it while the Art Commission process is followed. A timeline for a public process is still pending, he said.

"The Christopher Columbus statue has been a source of controversy in Philadelphia, as have similar installations across our country. Christopher Columbus, like many historical figures, has supporters and detractors. For centuries, he has been venerated with the stories of his traversing the Atlantic and "discovering" the "New World." However, his history is much more infamous. Mistakenly believing he had found a new route to India, Columbus enslaved indigenous people and punished those who failed to meet his expected service by severing limbs, or in some cases, murder.

"Surely, the totality of this history must be accounted for when considering whether to maintain a monument to this person. Given that many are now calling for the removal of the statue, and others believe it should remain, I have directed the Art Commission to review the statue, its location, and its appropriateness in a public park. We are committed to listening to all points of view and moving forward in the best way to heal our deep divides.

"I believe that a public process will allow for all viewpoints-especially those of indigenous people whose ancestors suffered under the rule of European colonizers-to be considered. It's also my hope that by initiating this process, the current tensions in Marconi Plaza can end. I urge all South Philadelphians attempting to protect the statue to stand down and have your voices heard through the public process," Kenney said.

A highly regarded police captain in the first district in South Philadelphia has been reassigned after he ordered a journalist from the group Unicorn Riot to leave the protest.

"I'm here as a journalist," the journalist is heard saying in a video.

The journalist, with Unicorn Riot, a self described non-profit left-wing collective, had verbal exchanges with people holding bats and weapons protecting the statue of Christopher Columbus.

"You're an embarrassment, an embarrassment." said a man protecting the statue from the journalist. To which he responded, "So what do you think about how Christopher Columbus cut off hands of people who didn't bring him enough gold?"

Shortly thereafter, someone grabbed the journalist's bike and a scuffle broke out. The bike's tires were slashed.

A short time later, Campione asked the journalist to leave.

"OK, obviously this is a volatile situation and you're aggravating the situation," he said.

Campione responded that he was giving him three warnings to leave.

The journalist finally did leave and police are reviewing the video in connection with the captain's conduct.

But the city removed Campione, a 42 year veteran of the department, and reassigned him to a post in the far Northeast without explanation. Tonight, the FOP says it will sue the city on the commander's behalf.

"It's an absolute disservice to him and his years of service and more importantly its a disservice to that community that he loved and he's dedicated his life," said John McGrody, a vice president for FOP Lodge #5.

South Philadelphia residents from the group "Take Back South Philly Streets" say they will hold a rally in support of Campione.