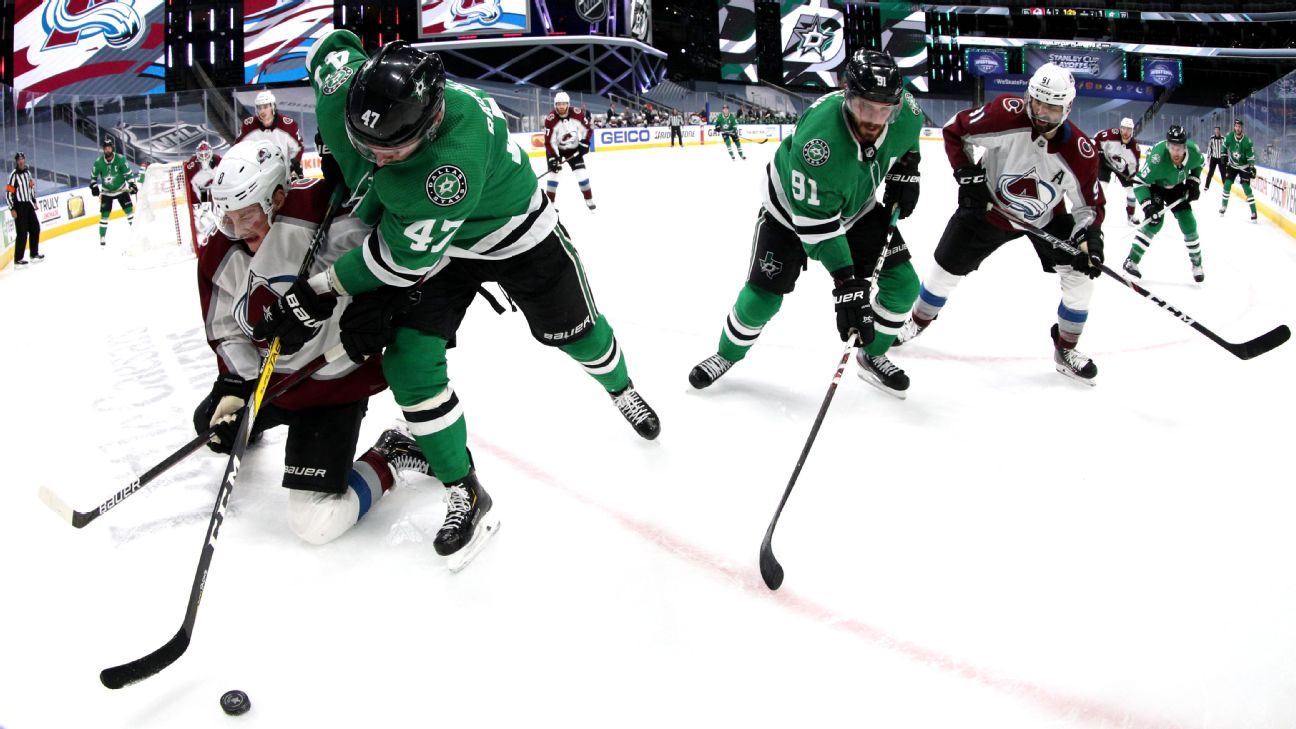 At first, we were worried we weren't going to have any Game 7s in the 2020 NHL playoffs.

Now -- thanks to three teams climbing out of the dreaded 3-1 hole -- we're going to have three in a 28-hour span. And that includes two on Friday! In the same rink! What could possibly go wrong?


Let's get you caught up on a wild Thursday night and look ahead to what promises to be a special Friday night.

The Avalanche have won two straight games to tie this up. Nobody is tearing up these playoffs quite like Nathan MacKinnon, who has scored in each of his team's 14 games, racking up nine goals and 25 points. Perhaps the only player coming close to MacKinnon is Dallas defenseman Miro Heiskanen (19 points, skating 25:28 per game on average). This one might come down to the goalies: Anton Khudobin is back in net after Ben Bishop's brief (but costly) return. Meanwhile, the Avs are likely sticking with their third-stringer, journeyman Michael Hutchinson -- because he has been awesome (.938 save percentage) and also because it's September 2020, and nothing makes much sense anymore. The NHL is starting this one in the afternoon (2 p.m. local time) just in case it goes to overtime, because we've got more action in Edmonton later on Friday.

The Canucks might be this summer's pluckiest team; every time you're ready to count them out, they turn it around and look like world-beaters. Thatcher Demko is the latest young star to sizzle for Vancouver; with 90 saves and just one goal allowed in the past two games, he may have just forced pending free agent Jacob Markstrom out of town. But, that's an issue for later. Vegas, meanwhile, remains confident that it's still the better team, despite whiffing on two straight chances to clinch. Thursday was a rare occasion for the team; it was just the 11th time in franchise history -- regular or postseason -- that the Golden Knights have been shut out. "It's nice that we have this opportunity tomorrow," Knights forward Max Pacioretty said. "You don't want to sit around your room in the bubble thinking about what went wrong."

Question of the day: Who starts in net for Vegas in Game 7?

The greatest drama so far these playoffs came via a tweet from Marc-Andre Fleury's agent, implying his client has been stabbed in the back by coach Peter DeBoer. Fleury has been replaced by Robin Lehner as the No. 1 starter these playoffs, though the two goaltenders maintain they've remained good friends. Nonetheless, DeBoer has typically turned to Fleury in the second of back-to-back games. Lehner allowed three goals on Thursday on only 22 shots.

With the season on the line, does the coach go with Fleury, the beloved franchise stalwart who led this team to the Stanley Cup Final just two years ago? Or run it back with Lehner, the trade-deadline acquisition on whom they've leaned for most of this tournament? Lehner, for the record, said he "felt pretty good out there" on Thursday and would be ready to put out his best on Friday; DeBoer, predictably, declined to name his Game 7 starter in the aftermath of Game 6 on Thursday night.


According to one venerable tweeter, DeBoer may have already botched the decision by turning back to Lehner for Game 6.

The Flyers had to play without their best forward, Sean Couturier, as well as top-six winger Joel Farabee. And yet, they got an emotional boost when Oskar Lindblom -- diagnosed with rare bone cancer in December, finished chemotherapy in July -- joined the lineup for the first time in 271 days. The Flyers had a hard time sustaining offensive pressure, and the Islanders had plenty more Grade-A looks. But Carter Hart stood tall with 49 saves and Ivan Provorov notched the game-winner in double overtime. The Isles have now missed on two chances to clinch the series. "Frustration level is honestly about 30 seconds and then that's about it," New York star Mathew Barzal said. "There's nothing we can do. Game 6 is over now and we've moved on." Full recap.

The Golden Knights had 90 shot attempts, including 48 on net. They just couldn't get anything past Demko, who has played out of his mind in his first two playoff starts, stopping 89 of 90 shots (.989 save percentage). "I feel great, don't have any complaints," Demko said afterward, hinting he might be ready for a Game 7 that starts less than 24 hours after this game was played. But it's not just the Demko Show for Vancouver. J.T. Miller got back on the board again, Quinn Hughes scored a point in his third straight game, andBo Horvat (10 goals in this tournament) joinedPavel Bure and Trevor Linden as the only Canucks players to score double-digit goals in one postseason. Vegas felt like it was the better team but just didn't get the bounces. Full recap.

The 24-year-old followed up his 42-save playoff debut with a 48-save shutout on Thursday. Per Sportsnet, he's the first rookie goalie since Jacques Plante in 1953 to win each of his first two career NHL playoff starts when his team was facing elimination.

He may have allowed four goals, but it's all about how he responded, fighting off a furious Islanders attack with 49 saves. There is no way the Flyers win this game without Hart playing as well as he did.

Double-overtime winner to stave off elimination and force a Game 7. Enough said.

"This kid has so much courage. I mean, he played unbelievable too. He hasn't played since -- I'm not even sure. It's been a long time, it's been a long battle. And this guy's heart -- you've got to see it to believe it." -- Flyers captain Claude Giroux on the return of Oskar Lindblom after 271 days.

Goal of the day

It came in a losing effort, but this short-sider from Mathew Barzal is a beauty. He takes the shot essentially on one leg, and might I remind you he's also playing with one severely bruised eye?

OK, so the Capitals are no longer in the bubble, but I can't stop watching this video of Alex Ovechkin's son, Sergei who is 2. I repeat, 2. And for everyone wondering, Sergei Ovechkin is eligible for the 2036 draft. 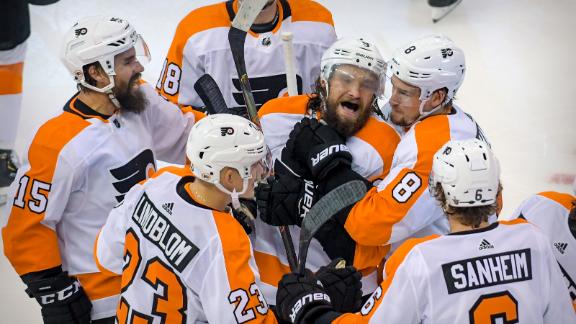 Flyers force Game 7 on Provorov's 2OT goal
The Flyers win in overtime for the second straight game as Ivan Provorov's goal in double OT results in a 5-4 victory and a Game 7 showdown with the Islanders. 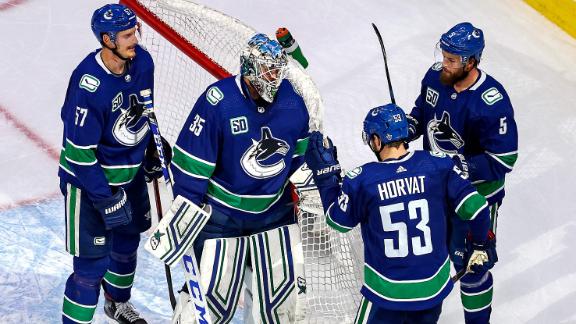 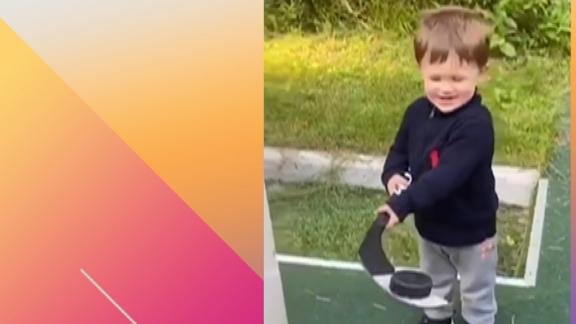