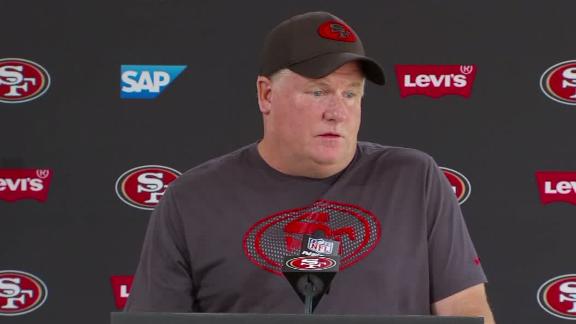 Kaepernick will play Thursday against the San Diego Chargers, though Kelly hasn't yet decided how many snaps he will get. Blaine Gabbert, the presumptive favorite to get the starting job, will not play in the game.

Kelly said he would like to finalize a decision on the starting quarterback after the preseason finale, with an announcement coming as early as Friday.

Citing Kaepernick's lack of repetitions because of injuries and the additional reps that Gabbert has received as a result, Kelly said it's necessary to ensure Kaepernick gets a longer look as he is satisfied with Gabbert's workload to this point.

"We plan on playing Kap in the game, just because he's got only 13 snaps so far in the preseason," Kelly said. "Gabbert will not play. He's had 43 snaps in the preseason."

Kaepernick made his preseason debut last week against the Green Bay Packers after missing the first two exhibition contests because of right shoulder tightness. He went 2-of-6 for 14 yards and rushed for 18 yards on four carries in one quarter of work.

He made national headlines for declining to stand for the National Anthemprior to the game against the Packers, saying he did not want "to show pride in a flag for a country that oppresses black people and people of color."

Gabbert has started all three preseason games to this point and gone 12-of-22 for 146 yards and a touchdown for a 90.3 passer rating.

Considering Kaepernick's injury issues and his lack of body of work this preseason, rumors have swirled that his roster spot could be in jeopardy.

Kelly again said -- as he has in the past -- that no conversations about releasing Kaepernick have taken place.

"We knew we were not going to release any quarterbacks at the cut to 75, so we haven't had a discussion about the quarterbacks position," Kelly said. "We kind of go through it position by position, and how many do we have to have to play in the Chargers game. You don't want to leave yourself short."

While Kelly and offensive coordinator Curtis Modkins have indicated recently that Kaepernick will be on the Week 1 roster, the head coach said Tuesday that Kaepernick is one of the two best quarterbacks on the roster right now.

"I don't have control of the 53-man roster, so I don't say who we're picking," said Kelly, adding that decision falls on general manager Trent Baalke. "We haven't had one discussion about the quarterbacks.

"It's a group thing. There's always input. The final say is Trent's, and that's the way it should be. It's not like I can say, 'Hey, I like these eight guys.' And he says, 'I don't care about those eight guys, we're going this way.'"