A-Rod gets tips from Barry Bonds 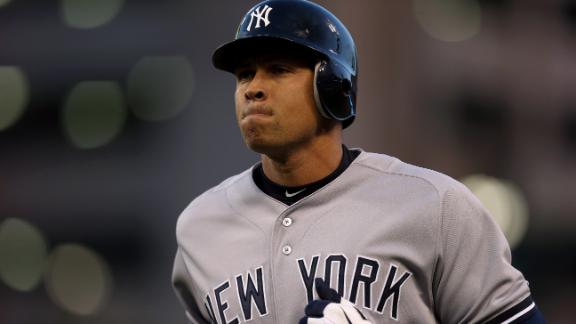 ESPN
By Andrew Marchand
Alex Rodriguez met with Barry Bonds multiple times to get hitting tips as he prepares for his return to the major leagues, spokesman Ron Berkowitz confirmed Wednesday.

The meetings with Bonds was presented by Berkowitz as part of a number of consultations with former standout hitters in an effort for Rodriguez to be fully ready for his return to the New York Yankees after missing last season because of his steroid suspension.

The meetings with Bonds seem like an odd choice because of the steroids link between the two. The San Francisco Chronicle earlier reported the story and that the meetings took place at the Future Prospects facility in San Rafael, California.

Shortly after New Year's, A-Rod posted a picture to his Instagram account that is said to be from the facility. Bonds was neither pictured nor mentioned in the description.

Rodriguez, who will turn 40 in July, is said to be in tremendous shape, a common refrain for all players prior to spring training.

He will arrive at the Yankees facility in Tampa as a marginalized player as the club signed Chase Headley to a four-year, $52 million deal to be the team's third baseman.

General manager Brian Cashman has repeatedly said he doesn't know what the Yankees will have in Rodriguez this season. At this moment, the team seems to view Rodriguez as mostly an option at designated hitter.

Rodriguez, who has three years left on his contract and is owed $61 million, needs just six more home runs to tie Willie Mays for fourth on the all-time list, which would allow him to rake it another $6 million performance bonus.

Bonds, who owns the most homers in MLB history, was a special instructor with the San Francisco Giants during spring training in 2014.