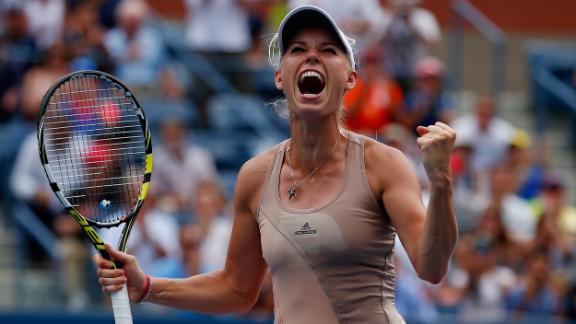 NEW YORK -- With mentor Martina Hingis cheering from the stands, 17-year-old Belinda Bencic became the youngest US Open quarterfinalist since Hingis herself in 1997.

Bencic saved three set points in the first, as Jankovic twice failed to serve out the set. She is the youngest player to reach a Grand Slam quarterfinal since Nicole Vaidisova at the 2006 French Open.

Hingis was 16 when she won the U.S. Open in 1997 -- Bencic was 6 months old at the time. Hingis' mother, Melanie Molitor, coaches Bencic.

The 58th-ranked Swiss teen has now defeated top-10 players in consecutive matches after upsetting sixth-seeded Angelique Kerber in the third round.

Earlier in the day, Caroline Wozniacki defeated Maria Sharapova 6-4, 2-6, 6-2 in 2 hours, 37 minutes to get back to her first Grand Slam quarterfinal in more than two years -- and get back in the headlines for reasons other than her personal life.

"The season for me has been a little bit up and down,'' Wozniacki said in quite an understatement, "and it's so nice to kind of start feeling like I'm playing the way I want to.''

Because of the heat, the players received a 10-minute break before the final set; Sharapova returned to the court late, arguing with the chair umpire after receiving a time violation warning. Perhaps sensing that she was fresher than the five-time major champion, Wozniacki later complained that Sharapova was dawdling between points.

Her tardiness seemed to swing the Arthur Ashe Stadium crowd's support squarely in Wozniacki's favor. When the 10th-seeded Dane broke Sharapova at love to go up 3-1 in the final set, she got a standing ovation from the fans and waved her arms to egg them on. Sharapova had appeared to hit a winner three times on that game's final point only for Wozniacki to somehow chase down the ball. Finally, Sharapova put a volley into the net.

Wozniacki mixed in just enough aggression with her signature defense to keep the pressure on Sharapova in the final set.

"She's very good at getting a lot of balls back and making you hit another one," Sharapova said. "In the end, I went for a little too much."

She insisted the conditions didn't bother her. Sharapova had been 17-6 in three-set matches this year, including her come-from-behind second-round victory here.

The fifth-seeded Sharapova's loss leaves No. 1 Serena Williams as the only woman remaining of the top six.

After a sloppy first set with 21 unforced errors, Sharapova was painting the lines in the second. Wozniacki seemed to spend most of the set watching in dismay as one of Sharapova's 22 winners whizzed by.

Wozniacki said she told herself before the third set to go for her shots.

She closed out the match by breaking Sharapova's serve again with a backhand winner.

Also on the women's side of the draw, Peng Shuai, who had never been to a major quarterfinal before, beat 14th-seeded Lucie Safarova 6-3, 6-4.

Wozniacki will next face 13th-seeded Sara Errani, who ended the run of qualifier Mirjana Lucic-Baroni with a 6-3, 2-6, 6-0 victory.

As a 19-year-old, Wozniacki made the 2009 US Open final, losing to Kim Clijsters, and reached No. 1 in the world the next year. But she hadn't been back to a Grand Slam quarterfinal since the 2012 Australian Open.

In the meantime, she was best known for getting engaged to star golfer Rory McIlroy -- then getting dumped in late May after wedding invitations had gone out.

Wozniacki lost in the first round at the French Open soon thereafter and was upset in the fourth round at Wimbledon. She had been playing much better since, though, winning her first title in nine months at Istanbul then dropping a pair of three-set matches to Williams.

Wozniacki also announced a month ago that she planned to run the New York City Marathon on Nov. 2 for charity, somehow squeezing in training during a busy fall season. Seems to be working out well mentally and physically on the tennis court.

"Kind of clears my head," she said of the extra running. "I feel more free when I go on court."

Wozniacki plans to stick around New York after the U.S. Open to attend Fashion Week -- including her pal Williams' show -- and get in some running in Central Park. The marathon prep has gone on hiatus the last few days, though.

As Wozniacki deadpanned, "I have a pretty big tournament here that I kind of want to try and win."

Wozniacki Tops Sharapova
Caroline Wozniacki beat Maria Sharapova in three sets to advance to the quarterfinals at the US Open.

Wozniacki: It's A Really Good Win For Me
Caroline Wozniacki talks about her win against Maria Sharapova to advance to the quarterfinals at the US Open.

Sharapova Falls To Wozniacki
Maria Sharapova talks about her fourth-round loss against Caroline Wozniacki at the US Open.