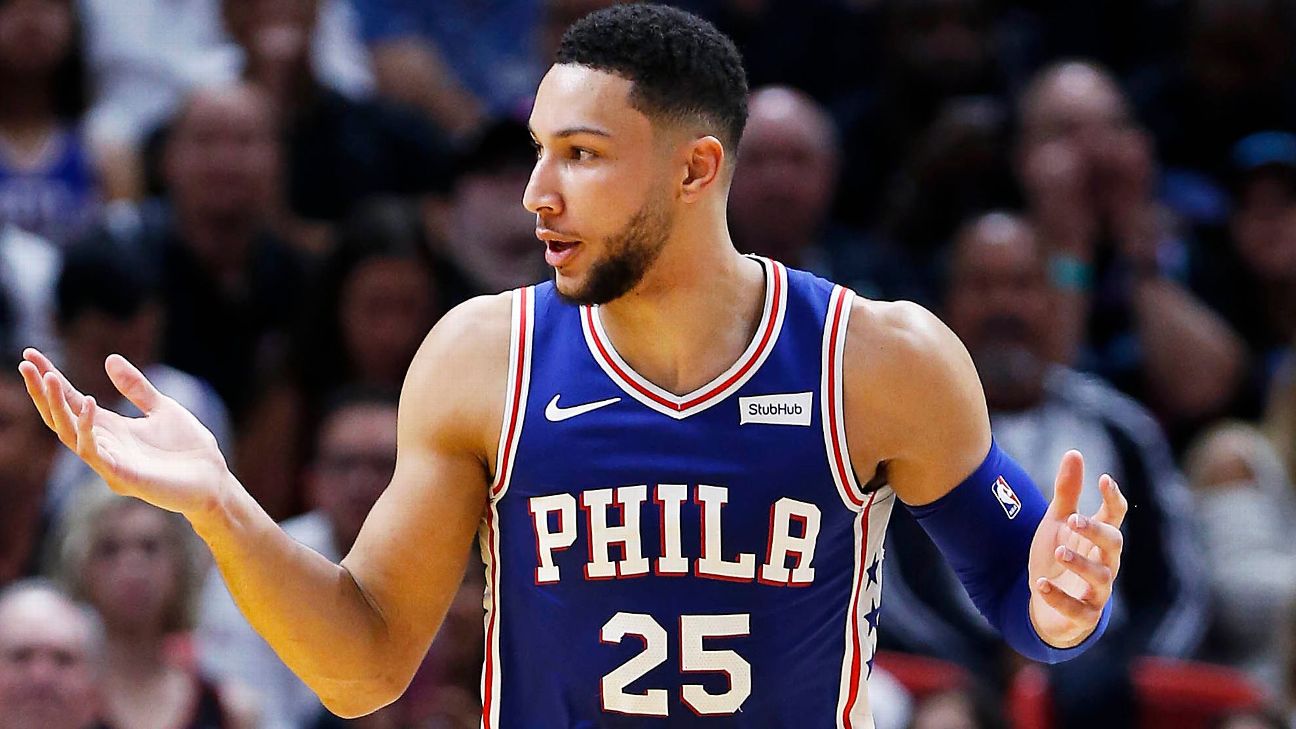 ESPN
By Tim Bontemps
PHILADELPHIA -- Few things in the NBA have been talked about more, and happen less, than Ben Simmons jump shots.

Don't expect that to change just yet.

"It's not that I don't need to do it," Simmons said this preseason when asked about his lack of shooting. "I'm confident in saying I'm not a great shooter. I'm getting better, though."

Simmons spent the summer in the gym -- working out twice a day, six days a week -- to improve his jump shot. But until it's ready for NBA games, he'll continue relying on everything else that made him a first-time All-Star last season at 22 years old.

"I lack something that I'm not as great at, but in other areas I'm very great," Simmons said. "I run the floor as well as anybody. I'm physical. I can rebound at 6-foot-10. I'm a point guard that can guard 1 through 5. That's just one thing that's coming into my game, which I'm excited about."

While the Philadelphia 76ers are excited about what Simmons already is, the topic of what he isn't won't go away. It's why Simmons' merely attempting a 3-pointer last season became big news. It's why video of Simmons taking 3-pointers in pickup games this summer was endlessly dissected. And when Simmons made a 3-pointer in a preseason game this month, pandemonium ensued.

But for now, that's just a tease, a trending topic for others outside the organization to latch on to. Inside it, team officials have made clear the constant chatter about Simmons' shooting -- or lack thereof -- hasn't shaken their faith in Simmons and his future. Philadelphia bestowed him with a five-year, $170 million maximum contract extension this summer, officially making Simmons and Joel Embiid the franchise pillars.

And as the Sixers begin their season Wednesday night against the Boston Celtics, both Simmons and the Sixers are betting that, outside shot or not, he is good enough to lead Philadelphia to the NBA Finals for the first time in nearly two decades.

In today's NBA, where perimeter stars dominate and 3-pointers are primary offensive weapons, the Sixers offer something different.

"I just think that with our roster, we have no choice but to play that big style," Sixers centerKyle O'Quinnsaid.

This summer, the 76ers sent Jimmy Butler to the Miami Heat in a sign-and-trade for Josh Richardson, sawJJ Redickgo to New Orleans as a free agent and signed Al Horford away from the Celtics. That left Philadelphia with a lineup composed of players who are 6-foot-6 (Richardson), 6-8 (Tobias Harris), 6-10 (Simmons and Horford) and 7 feet (Embiid) tall. That's before Philadelphia turns to a bench that includes O'Quinn, rookie Matisse Thybulle and forward Mike Scott, all of whom are at least 6-7. Philadelphia's opening-night roster features only three players under 6-4.

That size is primarily considered a virtue -- especially on defense -- and has helped make the Sixers co-favorites with the Milwaukee Bucksto win the Eastern Conference title.

But with that collection of size comes a lack of proven 3-point shooters. Among high-minutes players, only Harris and Scott are projected to be above average in terms of 3-point shooting percentage (36% or better) and attempts (4.6 or more per game), according to ESPN's Kevin Pelton. Which means on some nights, Philly's offense will be defined by a lack of shooting and spacing.

That Simmons serves as the team's point guard only magnifies the problem, with his lack of a jump shot -- along with his size -- making him stand out from today's generation of scoring floor generals.

Of course, it's Simmons' other skills -- combining the talents of a lead ball handler and inside force -- that led to his being Rookie of the Year in 2018 and an All-Star in 2019, despite being a threat to shoot only inside the restricted area.

"There's a lot more than just shooting the ball that goes into the game."

But Simmons' lack of shooting has the potential to undermine what the 76ers want to do on offense. During Philadelphia's seven-game loss to the Toronto Raptorsin last season's Eastern Conference semifinals, Simmons took a grand total of six fourth-quarter shots. None came farther than 6 feet from the basket. A year earlier, the Celtics limited his effectiveness by dropping a defender far off him and clogging the paint.

"I think you're going to start seeing more of that and people literally playing inside the foul line and daring him to shoot, like we did with[Rajon] Rondoat the beginning of his career," said Brendan Suhr, a longtime NBA assistant coach who served as an assistant at LSU for Simmons' lone collegiate season. "What's going to happen is sometimes when you get embarrassed, or when you lose, that's when all of a sudden things happen. And I think he's at that point right now."

Last season, with Butler taking over the offense late in games, Simmons often found himself without the ball and relegated to the "dunker spot" -- on the baseline, between the paint and the corner. The result was a lot of Simmons standing around and clogging up the team's spacing around Embiid.

Sixers coach Brett Brown has already said that's going to change this season, Simmons instead moving to the corner -- the closest and thus easiest spot on the court from which to make a 3-point shot.

"I'm spacing him to give him a chance," Brown said. "I'm not burying him under the backboard. I've got to participate."

The shot Simmons made earlier this preseason -- the first he has ever made in any NBA game -- came off the dribble. It also came against the Guangzhou Long-Lions of the Chinese Basketball Association, in a game the Sixers led by 38 in the final seconds of the first half.

Saint Joseph's coach Billy Lange, who spent the past six seasons as an assistant with the Sixers, said the ability to catch and shoot from deep, either from those corner spots or elsewhere, is what Simmons must focus on this season.

"When people talk about, 'He's got to make 3s,' it's not about the 3 he took [against Guangzhou]," Lange said.

"It is all about the catch-and-shoot. That's it."

Simmons has been as one-dimensional a shooter as the NBA has seen the past two years.

Being that ineffective from distance and becoming a shooter is not an easy task.

The Hall of Famer, who now serves as a Los Angeles Lakers assistant coach, came into the league 25 years ago with a jump shot so ineffective that people famously referred to him as "Ason Kidd" -- no J. By the time he retired in 2013, he ranked third all time in 3-pointers made.

"It was always a topic, I guess, once I got to the league that I couldn't shoot," Kidd said. "But that was never something that I harped on. I didn't spend a lot of time on it, because I relied on my strengths."

That is the same place that Simmons finds himself in now.

David Patrick is the head coach at UC Riverside and served as an assistant at LSU during Simmons' lone collegiate season. He also happens to be Simmons' godfather.

"When you're a young kid and you can run faster and jump higher than everybody, you're going to keep doing that until you get stopped, you know?" Patrick said. "That's kind of where he's at in his headspace."

That's where Kidd was too, until the then-New Jersey Nets acquired Vince Carter, taking the ball out of Kidd's hands more and forcing him to become a deep threat. With the help of shooting coach Bob Thate, Kidd rebuilt his shot.

"A lot of it was mechanics," Kidd said. "Starting from the foundation of your legs, using your legs, getting in the right position with your foundation. I spent a lot of time doing a lot of tedious drills that weren't fun."

Patrick said that while Simmons was in Los Angeles this summer, he noticed a difference in how his godson prepared for the upcoming season. He saw him stay in a more regular workout routine, particularly in terms of incorporating playing more pickup ball along with his shooting work with trainer Chris Johnson.

He also said that when Simmons came to Australia for vacation, he spent part of it working out with the Australian national team. That work has translated to Simmons' being viewed by people, both close to Simmons and around the team, as being both more confident in his shooting ability and more willing to actually do it.

"Now he's a staple of the organization," Patrick said, referring to Simmons' contract extension. "With that comes responsibility. Ben understands that and really [understood] that responsibility this summer living in the gym.

"You've got to learn to be a pro, right? He's done that going into this year."

Changing that much long-term muscle memory, though, is no easy feat. Take, for example, San Antonio Spurs swingman DeMar DeRozan, a four-time All-Star shooting guard who has never become a threat from beyond the arc. Instead, he has remained far more comfortable taking midrange shots.

"He worked on it," said Dwane Casey, who was DeRozan's coach for several seasons in Toronto. "Every summer he worked on his 3-point shooting, got up thousands of shots in the summertime.

"But when it got to [crunch] time, he went to his wheelhouse."

Simmons remains most comfortable shooting the ball with his left hand. It's what he has done his whole life, and despite calls from outside the organization for him to change to shooting with his right, no one in Philadelphia is interested in entertaining that.

"When he starts getting older, you're going to start seeing him hit some 3s, and that question will be sort of put into the, 'Are you serious?' basket that it deserves to be put in."

While no one who was asked remembers exactly why the ambidextrous Simmons began shooting with his left hand (as opposed to, for example, throwing a baseball with his right), his propensity to use his right when he's near the basket has led to the idea that he should try switching.

But even Cleveland Cavaliers big man Tristan Thompson -- who himself changed shooting hands several years ago -- isn't so sure Simmons should follow in his footsteps.

"I mean, it's something to explore. But it's worked out so far, being an All-Star and getting $170 [million]," Thompson said with a laugh. "So he might be too far in now."

Simmons isn't close to being a finished product. And he knows that. But for now, the Sixers say they believe he's good enough as is to lead this city back to the Finals for the first time since Allen Iverson's heyday.

"This is his city," Brown said. "It's his program. He signed a new contract. We showed him how we value him.

"It doesn't minimize the pride he has in fixing [his shot]. You could have a 50-year contract and get as many millions as these guys get nowadays, and it doesn't water down competitiveness, or pride. That still exists."

It's why Simmons spent the summer in the gym working on his shot. It's why the Sixers are putting the ball back in his hands full time. It's why Brown is moving Simmons outside the 3-point line when he doesn't have it. And it's why so many people got so excited about a made 3-pointer in a preseason game.

And until Simmons takes -- let alone makes -- 3-pointers with regularity, his shooting is going to be discussed. Whether the 76ers want to discuss it or not. 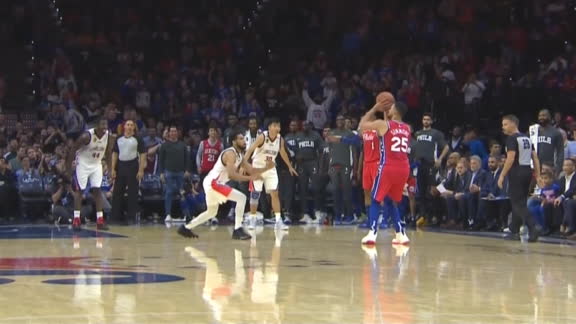 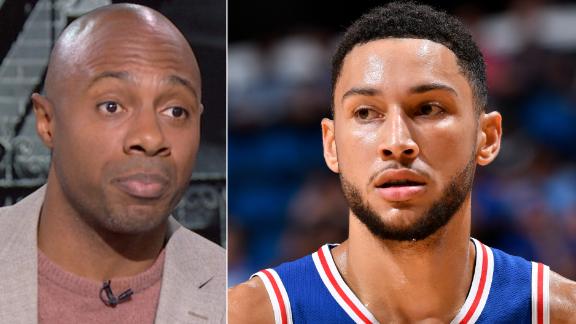 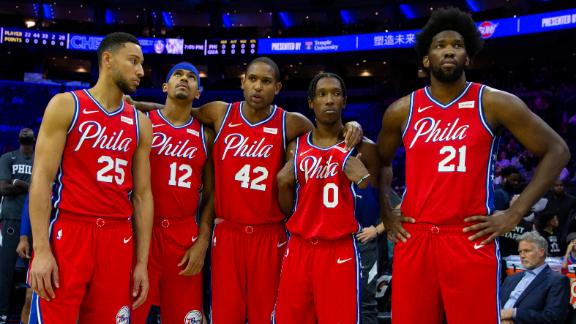 Sixers have sights set on Finals this season
After an active offseason, Joel Embiid, Ben Simmons and the rest of the new-look 76ers are expected to contend for a title.
Report a correction or typo
Related topics:
sportsespnben simmonsphiladelphia 76ersnba
Copyright © 2020 ESPN Internet Ventures. All rights reserved.
More Videos
From CNN Newsource affiliates
TOP STORIES