'Bring it on, man': NFL players prep for work stoppage, but vulnerability remains 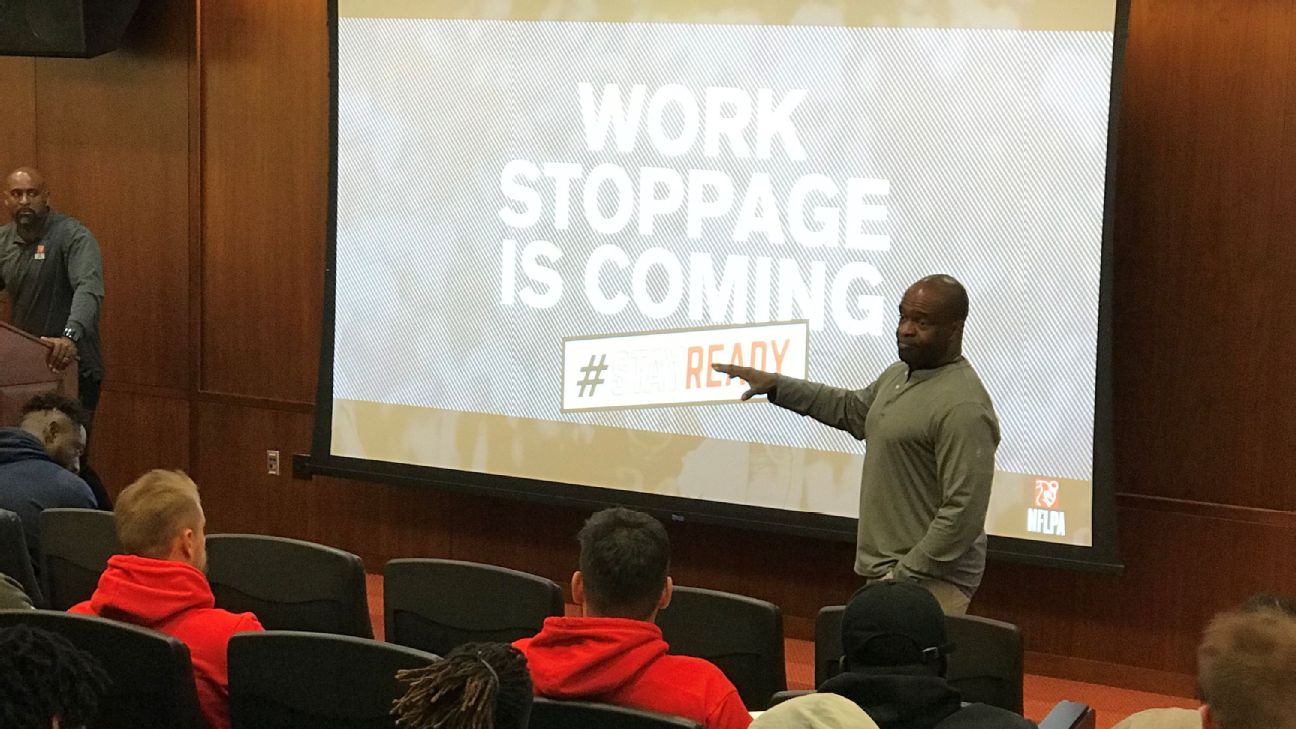 NFL players have big plans when it comes to the next collective bargaining agreement: They don't just want a better deal; they want to fundamentally change the power structure in the NFL.

For such a seismic shift to occur, and for the players to secure the things they want -- from a larger slice of the revenue to improved long-term health care to more substantive contracts -- the NFLPA needs considerable leverage as it continues negotiations toward a 2021 CBA. To obtain such leverage, players have to be financially equipped to endure an extended work stoppage. Otherwise, the billionaire NFL owners can use that vulnerability to their advantage, as was the case in 2011, when an 18-week lockout caused financial strain and weakened player footing.

The NFLPA is trying to get out ahead of the issue this time around. Executive director DeMaurice Smith set off on a six-week road trip this season with stops at all 32 team headquarters during which he urged players to get their finances in order. Making a presentation in front of a slideshow screen carrying the message, "WORK STOPPAGE IS COMING. #STAYREADY," Smith reinforced the steps necessary to get into a position of fiscal strength, which for players includes saving at least 50% of their paychecks.

ESPN surveyed all 32 NFL locker rooms and spoke with financial experts to see whether players are in fact heeding the call. We found that awareness and sound financial practice are up considerably from a decade ago, but a root problem remains -- one that threatens the negotiating power of the union.

"You would be shocked," New York Giants tackle Nate Soldersaid, "by how many people are spending all their money."

Former Denver Broncos offensive lineman Ryan Harris called it "scary" how casual some of his teammates were about being broke as the 2011 lockout approached.
"Guys were almost flaunting that they were out of money, where they were like, 'I'm out of money!'" said Harris, a 2007 Notre Dame graduate who has since become a champion of financial literacy in the NFL. "There were some big-time guys. It was not like guys were asking for 500 bucks. Teammates were asking me for $75,000. I'm like, 'Dude, what are you doing this month that you have a $75,000 need?'"

Harris was not alone. Eagles defensive end Brandon Graham, who had one year in the NFL under his belt at the time, said he had teammates hitting him up for six-figure loans when the prospect of missing paychecks became real.

Panic replaced nonchalance as players started missing workout bonuses in the summer of 2011. Harris estimates that 25% of players in the NFL were having financial problems by July.

According to one NFLPA-certified financial adviser ESPN spoke with, some turned to their agents for money during the dry spell, "and were almost extorting agents saying, 'Hey, you know what, you want me to stay with you, you need to lend me the money.' And that created a lot of pressure in those relationships."

Other players turned to loan sharks, who jacked up interest rates for those in need of cash in hand.

With a good portion of the group scrambling to stay liquid, it was clear the players were not ready for a long-term standoff, stripping the NFLPA of a key leverage point as a 10-year CBA was hammered out in July 2011 that swung the revenue split back in the NFL owners' favor.

Fast-forward eight years, and a lot of the players who went through that time are now union reps and team leaders, and are sharing the lessons learned with the younger players. Just think, the average age of an NFL player entering the 2019 season was 26.0 -- an impressionable age when adults are still figuring out finances.
"We tell guys all the time about saving their money," Pittsburgh Steelers veteran center Maurkice Pouncey said. "It's a lot realer than what people think."

"I don't think it's hard to persuade players that a work stoppage is likely -- because it just happened," added New Orleans Saints punter and member of the NFLPA executive committee Thomas Morstead."I think it's a lot easier for us to say, 'Hey, be ready.' The history is relatively fresh."

The NFLPA is doing a better job in its preparations as well. It is going hard on the education front. Besides the visits from Smith and regular email reminders, the union created a work-stoppage guide delivered in September that outlines ways to prepare, from finding renters for unoccupied homes to designating one day a week as a "no-spending day" to selling seldom-worn clothes and seldom-used cars.

The union passed a resolution in 2017 to withhold gaming royalty checks -- "Madden checks," as multiple players refer to them -- which would be distributed in the event of a work stoppage. That, along with union dues that have been set aside, is part of a "war chest" the NFLPA is building up to ensure players have a stream of income in the event of a lockout.

Several players cited ESPN's 30 for 30 "Broke" as an educational tool that has led to wiser spending practices.

Most players surveyed by ESPN said they were saving at least half of their paychecks, painting the picture of a group taking a prudent financial approach as the CBA talks heat up.

"If we want the things that we claim we want, guys have got to prepare themselves not to play football in 2021," defensive lineman Akeem Spencesaid. "Guys have to be willing to hold out and fight for what we want so younger guys coming into this league, they can get health care for life, higher guarantees, higher base salaries -- all the stuff that other sports have that we don't and that we're striving for. Save, don't have any crazy investments and just try to live a normal life. That's what I try to strive for myself and just live real basic so when push comes to shove, hey, I can do this [work stoppage] for three, four, five years, no matter how long.

"Bring it on, man," Spence said with a smile as he gestured with his hands. "Bring it on!"

A week after making those comments, Spence was cut by the Eagles.
He got back in the league, signing with the Jaguars a short time later, but it speaks to the volatility of the profession and the high degree of turnover that makes developing uniformity tough.

So, too, does the wide disparity in pay scale. It's easier to save half your paychecks when you're making $10 million a year like Chiefs tight end Travis Kelce, for example, compared to when you're pulling in the league minimum of $495,000 like Kelce's counterpart, Chiefs rookie tight end David Wells.

Another complicating dynamic is NFL salaries are paid during the season only, thereby inflating the size of the checks, along with the sense of wealth and security.Say an NFL player makes $800,000 in one year. That could mean he is receiving checks that are close to $47,000 before taxes.

"When a player's first signing bonus comes in, a lot of it is used to pay off debts and maybe put a down payment on a first house," said Mike Ladge, an executive director at Morgan Stanley whose client list includes a diverse mix of NFL players. "In the conversations I am having with these players regarding the end of the collective bargaining agreement in 2021, I am advising them to assume that the money will stop. There may be pressure to keep up with the spending habits of the other guys in the locker room, but buy just what you need, put away the extra money in the bank."

When it comes to younger players in particular, that can be easier said than done.

After winning Super Bowl 50, the Broncos' offensive line took a celebratory trip to Las Vegas. A pair of rookies piled into the car, Harris said, each carrying brown paper bags holding $50,000 in cash.

"I'm like, 'What the hell are you doing with that money?' And they're like, 'Oh, we've got to buy some ice.' And it just so happened that one of our teammates who has about $15 million of cash in the bank was sitting in the front seat and I'm like, 'How much ice does he got?' Not a single chain or watch," Harris said. "I pulled up a picture of Bill Gates and I said, 'How many chains does this guy got on?' None. All right. And then one of the rookies, thankfully, was like, 'Hey, can we stop back at my house, I'm going to drop this cash off.'"

Asked if he thought things have gotten better of late, Harris flatly said, "No," citing multiple examples of young players who continue to make big-ticket purchases the moment they get into the league, often at the urging of their family members.

"There was a player in the NFL, he was a rookie last year, a second-round pick. I think in total his signing bonus was $2 million, which is really $1 million [after taxes], and then you have the rookie minimum salary, which is still a lot, but his mother called his agent and told his agent her son needed to buy her a brand-new Mercedes SUV. And that's the kind of thing that happens."

Despite the emphasis on financial education, many players enter the league with an abundance of confidence that the windfall of cash is just the beginning, which makes it easy to splurge on themselves and loved ones. That combination has led to numerous stories of financial ruin.

That seems to be the key as the clock ticks toward the end of the current CBA: to get those who continue to empty their bank accounts to change their behavior, and quick. Because while the group of some 2,000 players might be better positioned overall this time around, when it comes to standing toe-to-toe with billionaires, there's little room for weakness.

"It's a necessary thing to talk about because it's definitely a potential outcome with the way things are going," Solder said of a work stoppage. "All players -- that is really the thing, getting everyone on the same page. Because there are plenty of guys doing it the right way. So it's getting that solidarity so we can be unified in our negotiations."

Added Pouncey: "You can't tell a guy what to do, but you can always have eyes on them and be like, 'You don't really need that,' you know what I mean? I think we just do a good job overall as a team, as an organization, trying to reflect that into the guys and tell them to do that. Hopefully every other team's like that, because it's going to get real. I know football season is taking away some of the views on that type of story, but as soon as the season ends, it's going to be the only thing people are going to be talking about." 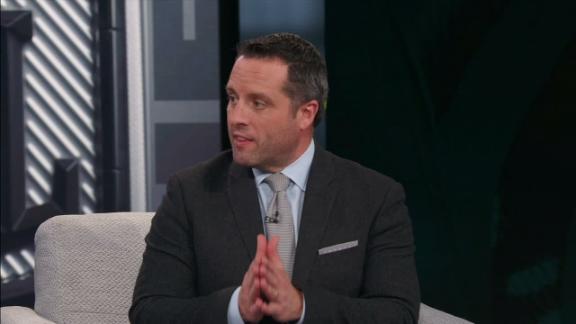