Brooklyn's slow and steady rebuild is running ahead of schedule 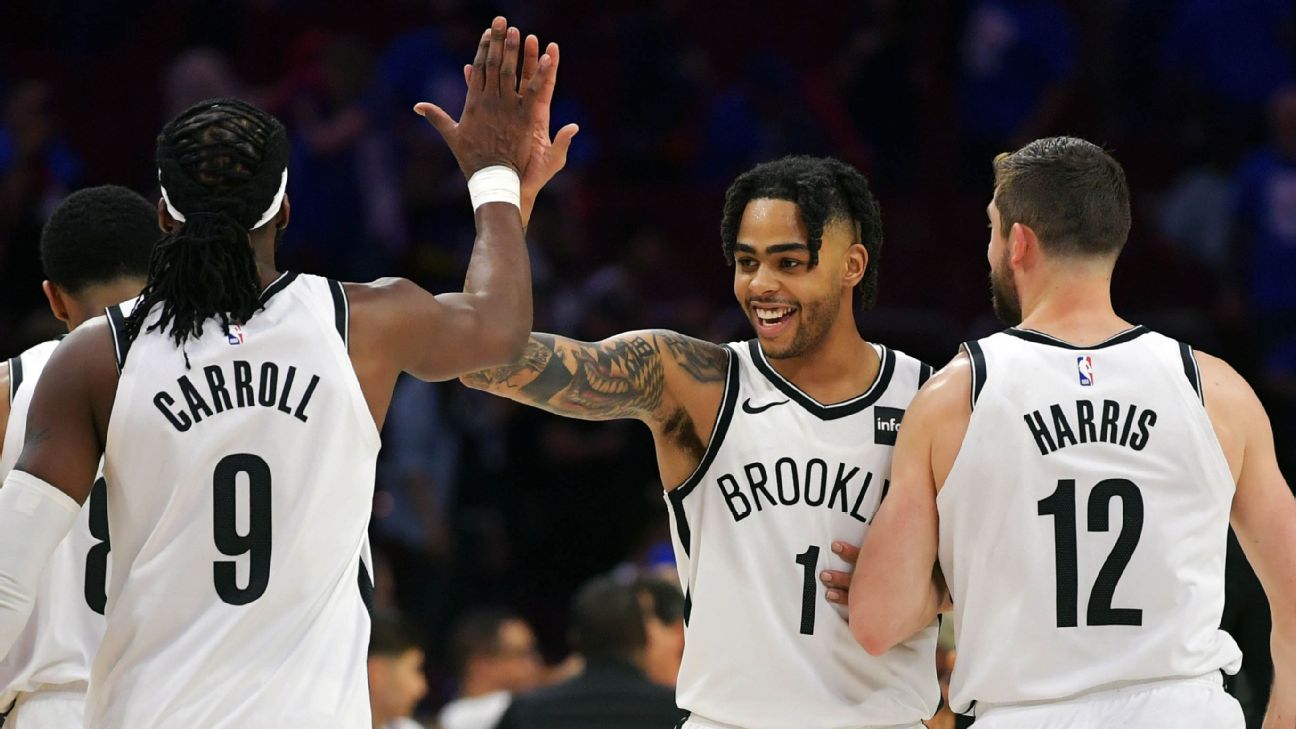 ESPN
By Ian Begley
IT WAS LATE JUNE in 2017, and D'Angelo Russell had settled into a regular offseason routine after his second season with the Los Angeles Lakers. It was a simple schedule: sweat through three separate workouts and return home to relax with a few friends by the pool.

"It was like the same thing, every day, every day," Russell said. "I would leave the house, go train, go to another place, go train, I was doing like three-a-days. And I remember throwing a party, a pool party -- every day, it was a little get-together, me and my boys and stuff -- at my house.

"And mid-pool party -- we're getting barbecue -- I get the phone call."

It was Russell's agents. They had news of a possible trade.

The destination was unknown but they told him it could be one of the two NBA teams in New York.

"Stay near my phone," Russell said of the instructions given to him.

His agents called back a few minutes later, this time with Nets president and general manager Sean Marks on the line. Russell was headed to Brooklyn.

The Nets were coming off a combined 41 wins over the previous two seasons, but Russell was undeterred, excited for a fresh start away from a Lakers franchise -- led by then-president Magic Johnson -- that days later would draft point guard Lonzo Ball No. 2 overall out of UCLA.

"I just knew it was kind of going that way [toward a separation from the Lakers]," Russell said. "In this league, when front offices change, you kind of don't have a feel for your future, you know what I'm saying?"

Though Russell changed coasts, the deal sent him from one rebuild to another. And boy were the Nets stuck in theirs -- Brooklyn was lacking the traditional tools for team-building: lottery picks.

Four years before they traded for Russell, the Nets swung big in the now-infamous 2013 trade with the Boston Celtics centered on Kevin Garnett and Paul Pierce. It was a franchise-gutting move that resulted in just one playoff series victory and cost Brooklyn three first-rounders and a pick swap that turned into the No. 1 overall selection in 2017 (the pick became Markelle Fultz).

Now, the Nets are back in the playoffs for the first time since an opening-round exit in 2015. And Brooklyn didn't waste any time putting a scare into the third-seeded Philadelphia 76ers, stealing a Game 1 win before a 76ers rout evened the series on Monday.

The Nets remain heavy underdogs, but just playing in mid-April is a testament to a process of their own: savvy roster moves and strong planning and patience from Marks, head coach Kenny Atkinson and the entire organization.

The rest of the NBA has taken notice.

"The staff, the players have all bought in. The system is in there," Spurs coach Gregg Popovich said. "They've slowly but surely built a culture."

IT WOULD BE EASY for Atkinson to say he always knew the Nets would get to this point, that he never lost faith amid all of the losing. But there were moments in his first season -- a 20-62 slog of a 2016-17 campaign -- when Atkinson had trouble trusting Brooklyn's vision.

"You're just questioning yourself," Atkinson said. "The next day, you're renewed, refreshed and you get back on track, but I have to be honest: There were doubts."

Marks provided the sounding board Atkinson needed during the franchise's dark times.

"Sean is my stabilizer," Atkinson said. "I'm a little more emotional, going with the ups and downs of the daily season. He's a guy I can vent to, he can counsel me.

"The great thing about Sean: He's been a player, he's management and he's been a coach. He's done scouting. ... He knows what the whole process is like."

Under former GM Billy King, head coach Lionel Hollins and then interim coach Tony Brown, Brooklyn won only 21 games the season before Atkinson arrived in 2016. The draft had provided little solace (the Nets haven't had a pick better than No. 22 overall since 2010).

With plenty of losing but without any of the high draft picks that came with it, Marks and Atkinson worked with what they did have. It has been a flurry of unheralded moves that slowly turned Brooklyn's fortunes:

Spencer Dinwiddie and Joe Harris signed multiyear, team-friendly minimum contracts in 2016. Prior to Harris signing with the Nets, many NBA front offices questioned whether he belonged in the league at all. Dinwiddie was on his fourth NBA team in three seasons. Both players developed into key contributors under Atkinson and have since re-signed multiyear deals with the club.

"A lot of people thought [Harris] would be a depth player in this league -- probably not a rotation player," Dallas Maverickscoach Rick Carlisle said. "Now he's a starter. He'd be a player that most teams would covet."

Brooklyn traded Bojan Bogdanovic and Thaddeus Young for packages that returned first-round picks that became Jarrett Allen and Caris LeVert, respectively. Young and Bogdanovic are now key players for the Indiana Pacers, but Allen -- eighth in the Eastern Conference in blocks this season as Brooklyn's defensive anchor -- and LeVert have become vital pieces of the Nets' young core.

"A lot of guys have had a similar journey, have a chip on their shoulder," Dinwiddie said. "And [we're] also playing for an organization that really kind of gave you your first real shot in the NBA. That's where I take my pride from."

The 2017 trade for Russell has certainly been the highest-profile move. Russell, a restricted free agent this summer, blossomed into a first-time All-Star behind career-high averages in points (21.1), assists (7.0) and shooting percentages from the field (43.4) and from deep (36.9).

Taken in totality, Brooklyn has had many more hits than misses since Marks took over for King, whose tenure as Nets GM ended in January 2016.

During King's run with the Nets, he traded 11 first-round picks, made four head-coaching changes and spent more than $123 million in luxury tax (including a then-league-record $90.6 million in 2013-14).

"That they were able to dig out of the Pierce-Garnett trade this quickly is remarkable," a Western Conference executive said. "Credit to them for staying the course."

On the court, part of the Nets' road back has been identifying and adhering to a specific approach on both ends of the floor: less midrange shots for them, and more for their opponents.

"No matter who's been on the floor for them, you know this is Kenny's team," an Eastern Conference scout said.

The third-year head coach still gets on the floor with his players, a byproduct of his roots as a top player development assistant coach in Houston, New York and Atlanta. He's humble, and self-reflective -- a trait that has endeared him to his players.

"I'm not a 10-year coach that's kind of like, 'Hey, this is how you do this.' I'm learning with the guys and I think they appreciate that," Atkinson said. "There's no airs here.

DURING ALL-STAR WEEKEND,Russell and Dwyane Wade are in a hallway inside Charlotte's Spectrum Center, walking side-by-side when a nearby camera catches their conversation.

"You know you're one of the best in this game right?" Wade tells Russell. "You know that, right?" Months later, Russell smiles when he talks about Wade's message that night.

Russell has carried the Nets for stretches when Dinwiddie and LeVert were sidelined by injuries. And he has become the kind of go-to scorer that every team -- even one with Brooklyn's egalitarian approach -- needs in the playoffs.

"With talent comes responsibility, and he has a lot of responsibility on his shoulders and he's responding fantastically," Atkinson said.

Teammates point to Russell's summer work, which focused on preparing his body for the rigors of the season. "I think now he's seeing the results and running with it," Carroll said.

Russell's career season seems to have defused the narrative that followed him from his Lakers days, a label of a poor leader who lacked maturity. That was fueled by Magic Johnson, who questioned Russell's leadership after trading him to Brooklyn.

"I ignored that reputation [based on what was said in the media]," Atkinson said. "I was on the lookout, too, right? It's kind of like a test run. That stuff, it's not even in my mind anymore.

Russell set a franchise record for 3-pointers made (227), is the youngest Net to reach the All-Star Game since Buck Williams in 1981 and scored more clutch-time points than any Net other than Vince Carter's total in 2006-07.

"It's confidence," Russell said. "I trust my craft. I know what I'm capable of."

Carroll says he sees it as well. The veteran wondered about Russell's approach and professionalism before he shared a locker room with him. Not anymore.

"Before I thought he was just like a knucklehead. Now, he's right next to me all the time [in the locker room]," Carroll said. "He's got a good heart. All these things people said about him, they really don't know him on a personal level.

"Sometimes you can do things and they can blow up in a bigger light than what you expected. I think some of the things he regrets. But I think at the end of the day, him coming to New York, a different scenery, having good vets around, a good group around him, now he understands where he stands in the game of basketball."

As far as the Nets stand, it's clear that the front office is building something sustainable for years to come in a new, post-LeBron James Eastern Conference.

"The fact that I'm here with you guys in this playoff scrum," Atkinson said. "I didn't expect it to come this soon. It's hard to believe, quite honestly. I keep saying we're ahead of schedule and proud of that."

Russell, Allen, Dinwiddie, LeVert -- they've all coalesced under Atkinson to form one of the most entertaining teams in the East. And the future looks bright. Brooklyn is expected to have enough cap space for a max free agent this summer (and can make room for two, depending, in part, on how it handles Russell's restricted free agency).

The Nets recently decided to extend the contracts of Marks and Atkinson -- "It's like locking up your point guard and your center for your franchise," Russell said -- and, for the first time since the Boston trade, they own their own first-round draft pick. The irony, of course, is after all the years when they lost enough games to be in line for a top pick but didn't own it, the Nets won't be a lottery team.

"We have a lot of pride, just to see how far the organization has come over the last three years," Harris said. "Since Sean and Kenny have come in, we've gotten to this point where I think definitely we can feel proud about bringing playoff basketball back to Brooklyn." 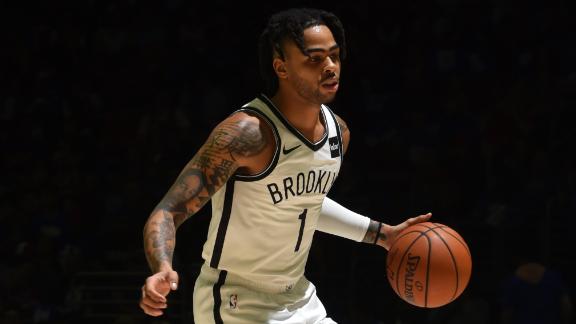 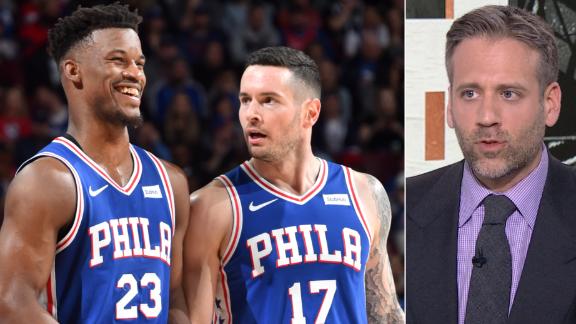 Max after 76ers' blowout win: 'The series is over'
Max Kellerman likes the 76ers to cruise past the Nets after their blowout win in Game 2, saying they have too much talent for Brooklyn to beat. 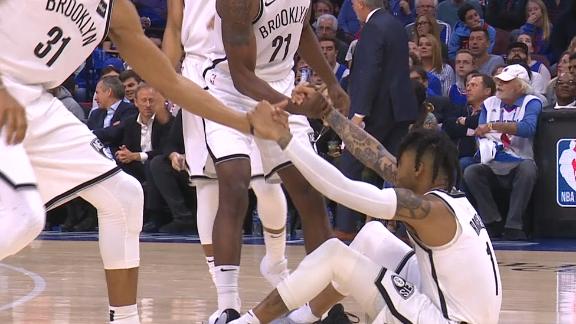