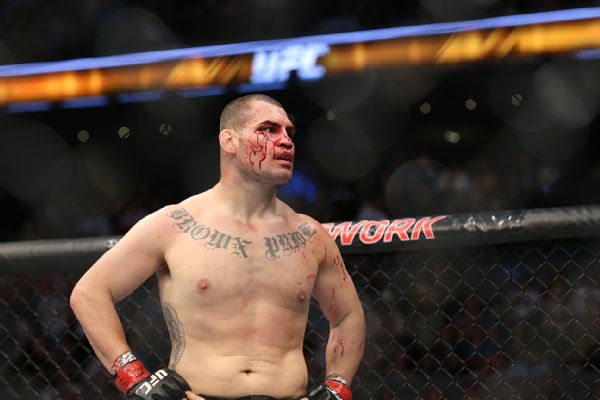 A heavyweight rematch between Cain Velasquez and Fabricio Werdum scheduled for next week's UFC 207 event in Las Vegas has been canceled.

The Nevada State Athletic Commission opted to not approve Velasquez (14-2) to compete, due to medical issues.

"Based on medical records, interviews and the best judgment of Chairman Anthony Marnell, attorney general J. Brin Gibson, the executive director's office and our physicians, in an effort to protect the health and safety of the athletes, it's been determined Cain Velasquez is unfit to fight," the NSAC said in a statement.

"The financial incentive for fighters to compete is strongly compelling, and it is the responsibility and obligation of this commission to intervene when excessive risks are evident," the NSAC said. "It's obvious Mr. Velasquez is physically compromised, and competing would place him in significant physical risk."

In a statement, the UFC said Werdum will not face a replacement fighter, and thus the card, headlined by a women's bantamweight title fight betweenAmanda Nunes and Ronda Rousey, will feature 10 bouts instead of 11.

Earlier this week, Velasquez, 34, told ESPN.com he had suffered from back pain during training camp and was already scheduled to undergo surgery on Jan. 4. The San Jose-based heavyweight said he had relied on Cannabidiol (CBD) to dull the pain enough to train.

"It's an achy pain that goes down your leg, and it gets to a point where if you're standing for 10 minutes, you have to sit down," Velasquez told ESPN.com. "If you're going out for a while, a half-hour, you know it's going to be pretty painful. You have to sit down and take the compression off your back."

Despite those revelations, both Velasquez and his longtime coach Javier Mendez insisted the fighter would be fine to face Werdum. The fight was supposed to be a rematch of a heavyweight title fight that took place in June 2015.

"As far as preparation, I've done everything," Velasquez said. "I've sparred, wrestled. I'm not missing workouts at all. I've done my conditioning -- everything. I feel great going into this."