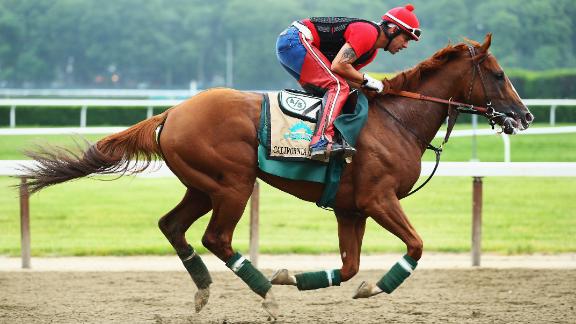 The Kentucky Derby and Preakness winner will face 10 rivals old and new on Saturday at Belmont Park. Since Affirmed became the last Triple Crown winner in 1978, three Belmont fields with the same history on the line also drew 11 horses in 1981, 1988 and 2002.

California Chrome will break from the No. 2 post under Victor Espinoza, putting nine horses to his outside and giving Espinoza a good look at the early speed. Eleven Belmont winners have come out of that spot in the starting gate, the last being Tabasco Cat in 1994.

"I like number two," Espinoza said. "Hopefully, it's my lucky number."

Racing fans looking for an omen will see California Chrome listed No. 2 in the betting program, the same number as 1973 Triple Crown winner Secretariat, who won the Belmont by a record 31 lengths while setting a track record that stands for the 1½-mile race.

California Chrome went for his usual gallop earlier Wednesday, and Sherman was pleased.

"I feel better about this race than I have any other race, to be honest with you, just looking at the horse and saying, Wow," he said. "I see how far he's advanced. I know it'll be tougher going a mile and a half, but this horse is a good horse. I think he's the real McCoy."

Of California Chrome's 10 rivals, four come into the Belmont off a five-week break. Commanding Curve hasn't run since finishing second in the Kentucky Derby on May 3; Wicked Strong has been off since stumbling and finishing fourth in the Derby.

Two other Derby horses, Samraat (fifth) and Medal Count (eighth), also skipped the Preakness on May 17.

Wicked Strong was a distant second choice at 6-1 and drew post No. 9. The colt is based at Belmont, and has one win in two previous races at the sprawling track.

"I'm pretty confident; as confident as I can be," Wicked Strong trainer Jimmy Jerkens said. "I really like how he's doing. It's a big, prestigious race and people are going to take a shot, especially with the distance being a big question for everybody."

None of the horses has run as far as they will on Saturday, and few will ever be asked to do it again in their careers. Since most U.S. horses are trained for speed, the distance is unfamiliar and they aren't regularly trained to run that far. The Belmont is the longest of the Triple Crown races.

Four newcomers to the Triple Crown trail will try to derail California Chrome's bid for history.

Tonalist was made the third betting choice at 8-1 odds and will break from the No. 11 post. The colt has experience over the track, having won the Peter Pan Stakes on May 10.

So are Commissioner and Matterhorn, both trained by Todd Pletcher, and Matuszak.

Commissioner, listed at 20-1, finished second in the Peter Pan, and 30-1 shot Matterhorn was fourth.

"We're in the Belmont because we feel like they're horses that want to stay the distance," Pletcher said. "They both need to improve and they both need to run their best races to be a part of it."

Matuszak was second in the Federico Tesio at Pimlico on April 19, making him the most well-rested colt in the race. The 30-1 shot is trained and ridden by Hall of Famers Bill Mott and Mike Smith, respectively. Smith won last year's Belmont aboard Palice Malice.

Ride On Curlin and General a Rod are the only other horses besides California Chrome that will run in all three legs of the Triple Crown. Ride On Curlin was seventh in the Derby and second in the Preakness, while 20-1 shot General a Rod was 11th at Churchill Downs and fourth at Pimlico.

"Hopefully, another five-sixteenths of a mile and we'll be able to catch him as opposed to the Preakness, but that Chrome is going to be hard to catch," Ride On Curlin trainer Billy Gowan said.

Ride On Curlin will have a new jockey for the Belmont in Hall of Famer John Velazquez, who regularly rides at the track. General a Rod has a new rider, too, with Rosie Napravnik aboard.

At 12-1, Ride On Curlin was one of eight horses in the Belmont field listed at double-digit odds. General a Rod is one of four 20-1 shots.