Cancellations, upsets and the Pillow Fight of the Week make The Bottom 10 all about the Big Ten 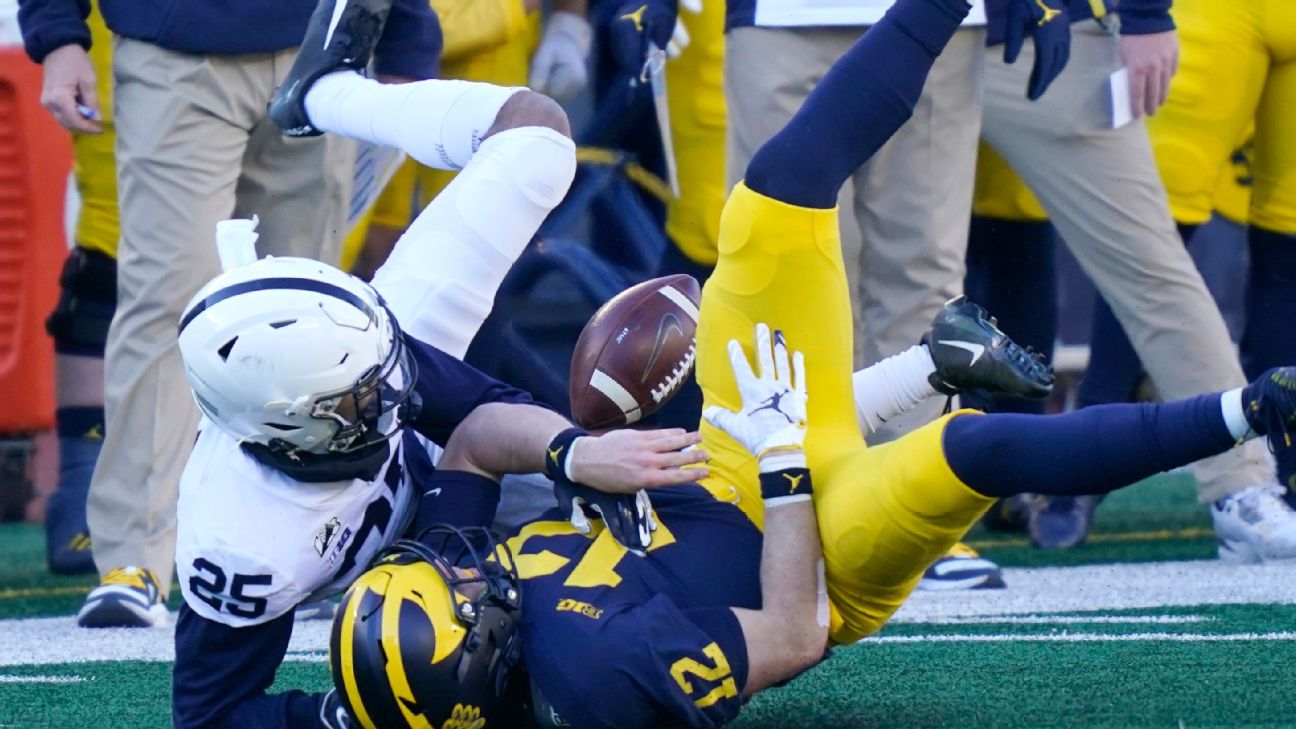 [Editor's note: Some Bottom 10 teams have wrapped up their seasons, while others still have a month to play. Meanwhile, the Big Ten is somewhere in between, thanks to everyone from Ohio State and Northwestern to Michigan and Penn State.]

Inspirational thought of the week:


Hey Spike, you're scarin' my wife

Could you tell me about life?

I'm may need, need, a dog collar to, boy

Here at Bottom 10 Headquarters, located beneath the giant neon "RD" that signifies the entrance to the Letterman's Club of the Fighting Rece Davises, we can be a bit of a spiritual bunch, especially during a year like this one. So whenever there is a universal confluence of humanity -- a moment when the chaotic cosmic tumblers of space and time suddenly and impossibly click into place to draw an invisible yet powerful line, a thread that connects us all, man, woman, child and alien alike -- we pause to show our gratitude for such an occurrence, especially during Thanksgiving time.

For instance, what happened at the Carrier Dome on Saturday afternoon.

Afterward, Syracuse head coach Dino Babers called the spike "unfortunate." But we don't see it that way. What we saw was the spark that lit the fire of Bottom 10 Nation, as our social media timelines were suddenly filled with wonderment. OK, yes, there was plenty of outrage and Orange-hot anger, but it was mostly wonderment -- a shared feeling of certainty during these uncertain times. For while we might not know when life will return to normal or even what that normal will be, there is nothing more normal that knowing when a Bottom 10 team is a true Bottom 10 team that just had a true Bottom 10 moment and that its Bottom 10 ranking is as solid as the firmament of the Earth or the scowl on Jim Boeheim's face.

The Warhawks were edged by Louisiana, 70-20. Looking ahead to their final games and final Bottom 10 championship résumé statements, according to the mysteriously accurate FPI Ouija board, ULM has an 11.5% chance to win at Arkansas State on Saturday, an 11.1% chance to win at Troy on Dec. 17 and, interestingly enough, only an 11.3% chance to defeat the Fightin' Byes of Open Date U. on Dec. 12.

The Minutemen lost their last scheduled game (as of now) 45-0 at Liberty, bringing to mind the words of a famous patriot who inspired the original Minutemen so many years ago. It was Patrick Henry, not far from Lynchburg, Virginia, who on March 23, 1775, cried out "Give me Liberty or give me death!" But it was UMass fan Henry Patrick who, while driving back to Amherst from Lynchburg on Nov. 28, 2020, called me and screamed, "Give me Liberty AND give me death!"

KU kicked off its late autumn tour of Texas with a 59-23 loss to TCU. Up next is a visit to Texas Tech, followed by a rescheduled visit from Texas. Sources tell Bottom 10 JortsCenter that both theTexans and Cowboysinquired about scheduling Kansas, but ultimately, the Big 12 determined that adding them to the calendar would do too much damage to the conference's overall strength of schedule.

Syracuse's only win this year was over Georgia Tech. Georgia Tech just earned its first win since beating Louisville on Oct. 9, as this week the Yellow Jackets knocked off Bottom 10 Waiting List member Duke. Duke's only ACC win this year came over Syracuse the same weekend that Georgia Tech beat Louisville. Louisville beat Syracuse two weeks ago for its first ACC win since beating Florida State on Oct. 24. Since Florida State has already lost to both Georgia Tech and Louisville, and the Seminoles' last two games are still marked as "postponed," they should, naturally, schedule Duke and Syracuse, right? Has anyone asked Dabo Swinney what he thinks FSU should do? NO, WAIT, DON'T DO THAT!

Quick recap of the week for the B1G: Ohio State had to cancel itsgame at Illinois, and the Buckeyes are now furiously doing the math to see how they can still win the conference and make it to the College Football Playoff while having played the same number of games as UMass. Northwestern, a 2019 Bottom 10 stalwart, had climbed into the Top 10 before losing to one-win 2020 Bottom 10 stalwart Michigan State. Nebraska, which lobbied hardest to play this fall, fell to 1-4 and had a postgame spat with Iowa about the proper way to clap one's hands. Penn State and Michigan played in the Pillow Fight of the Week. Feel-good story Indiana lost its quarterback for the remainder of the year. Wisconsin and Minnesota also had to cancel. Purdue lost to one-win Rutgers. It was the conference equivalent to the family Thanksgiving dinner that turns into an argument about politics and who bought the cheap paper plates.

Last week, we angered the fans of Yew-tah State when we led into the nation's only Thanksgiving night college football game and accidentally called them both the Other Aggies and the Utes. That was a typo. But we won't have to worry about making that mistake again, because the Other Aggies rolled over New Mexico, whom will we never, ever confuse with their most bitterest of rivals, the Other Other Aggies of Whew Mexico State.

The Loathsome Lonesome Foursome of MACsome all lost last week to all drop to 0-4. This week, they kick off the semifinals of the MACtion division of the Bottom 10 Playoff, when Boiling Green travels to Akron-monious, followed the next weekend with Northern Ill-ugh-nois taking on the EMU Emus. Just how big are these looming showdowns? Big as a Bear. Or the Bear.

It was never a question of if an American Athletic Conference of American Athletics team would occupy this spot, but rather which one. When Temple's game with No. 7 Cincinnati was canceled, it not only saved the Owls from a game in which Cincy was favored by 36, it also turned our attention back to US(not C)F. USF lost to Temple earlier this season but also just lost to UC(not S)F 58-46 for their fourth straight L(Not W) in the War on I(not J)-4.

It doesn't get more 2020 than making thefeel-good college football headlineof the season vanish less than 24 hours later with a coach firing.

In the time it takes you to read this sentence, Cal special teams will have muffed a punt and had two kicks blocked, one by someone's elbow. 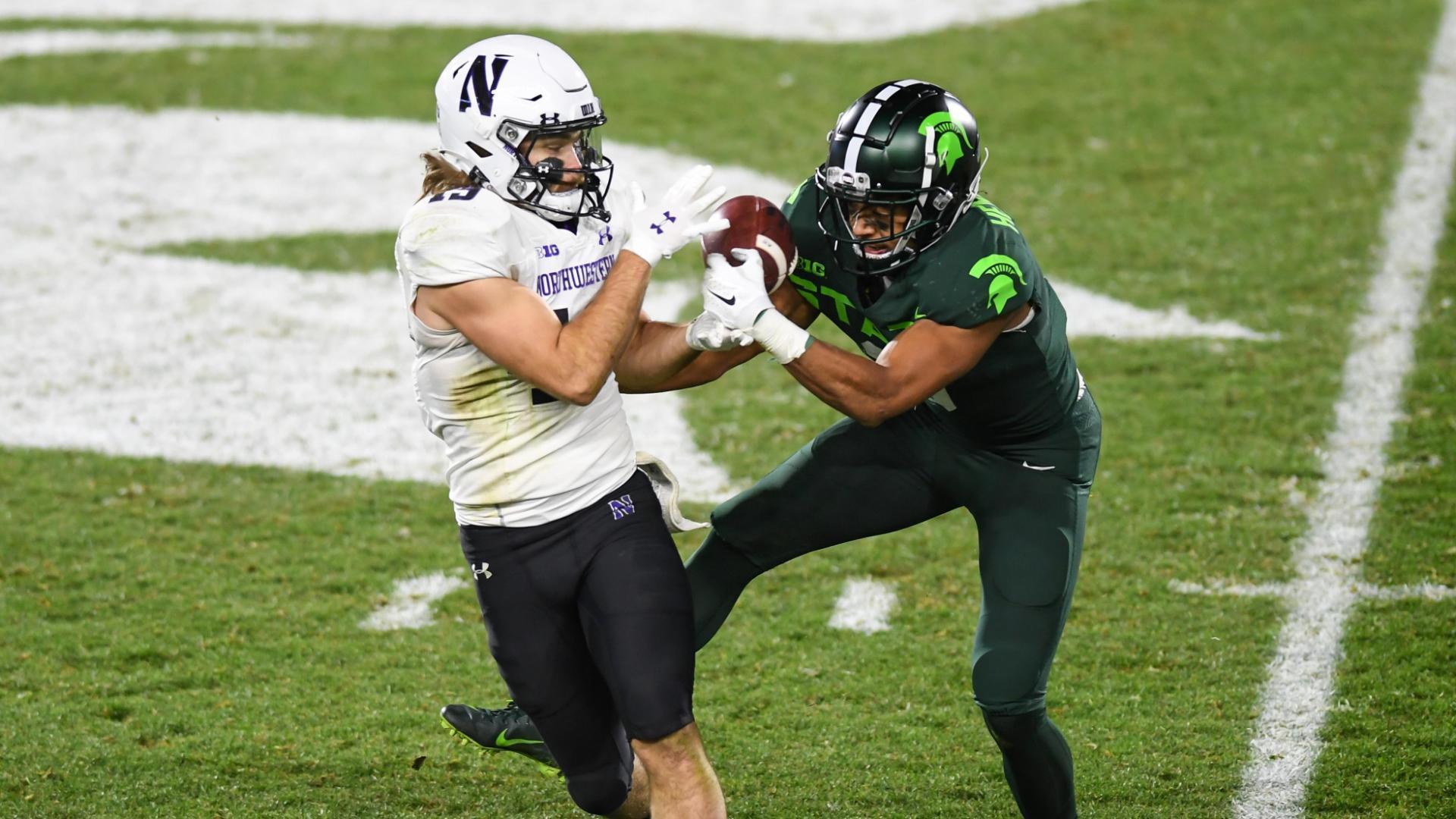