Eagles at Cowboys: Who will rule the NFC East in 2019 and beyond? 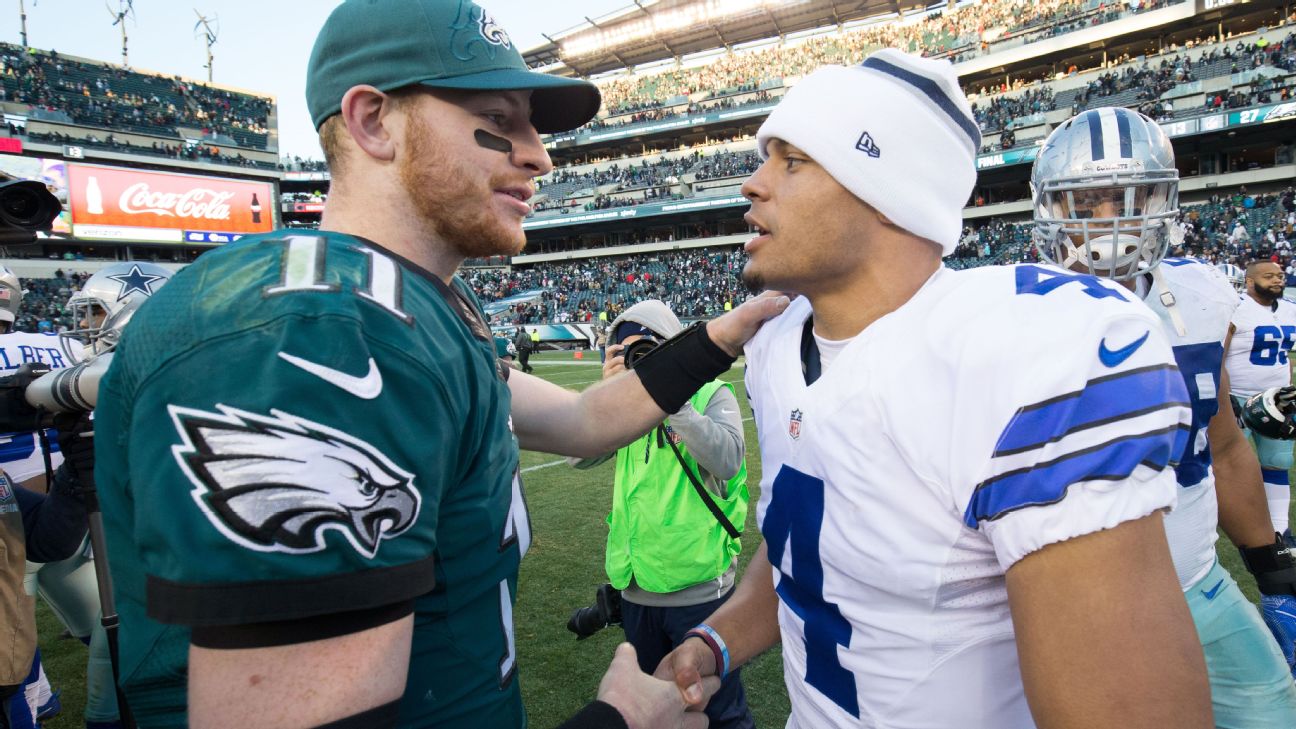 The Philadelphia Eagles and Dallas Cowboyshave not achieved the starts expected when the 2019 NFL season began.

Both are 3-3, and they have lost games they never would have expected to lose, but when they meet Sunday at AT&T Stadium (8:20 p.m. ET, NBC), first place in the NFC East is on the line, and the winner will have a leg up with the New York Giants and Washington Redskinsstruggling.

The Cowboys (three-point favorites, according to Caesars Sportsbook) are fighting history in trying to repeat as NFC East champions. No team has won back-to-back division titles since the 2003-04 Eagles, who were coached by Andy Reid. The Eagles have finished first or second in the division in five of the past six seasons.

With that as the backdrop, NFL Nation reporters Tim McManus and Todd Archer discuss the short- and long-term possibilities of this likely two-team race.

Why will the Eagles/Cowboys win the NFC East in 2019?

McManus: The NFC East is no beauty pageant, but the Eagles are best-equipped to climb out of the slop and into the postseason. They have:


That combination should be enough to push them over the top.

Archer:When the Cowboys are healthy, they have a more complete offense than Philadelphia does. They can win games on the ground with Ezekiel Elliott and the offensive line. They have a passing game that can beat teams over the top.

Now, when will they be complete? Tyron Smith, La'el Collins, Amari Cooper and Randall Cobb are hurt, and it isn't certain that any of them will play Sunday.

Defensively, they need to take the ball away more, but they are excellent on third down (34 for 67, 50.8%). Dallas can pressure the quarterback, though getting more sacks would be nice. Last season the Cowboys overcame a 3-5 start to make the playoffs, showing the resilience all good teams must have. The bulk of that team remains, and they understand the ebb and flow of a season.

Beyond injuries, what will hold this team back?

McManus: A porous pass defense. The Eagles have yielded 100-plus yards to six different receivers this season while giving up the most explosive plays through the air (seven). The cornerbacks have been the weakest area of the team to date. They need to be bailed out by a consistently strong pass rush but so far haven't gotten that.

The departures of Chris Long and Michael Bennett this offseason weakened the front, and Philly hasn't found adequate replacements. Add the fact that star tackle Fletcher Cox has spent the early portion of the season rounding into form following foot surgery, and you have a unit that has struggled to generate regular pressure. If that doesn't change, this season will go up in smoke.

Archer:A difficult schedule down the stretch. When the 2019 schedule was released, it was easy to pencil in wins at Detroit and against Buffalo on Thanksgiving -- but not so much now. After the Eagles game, the Cowboys play only two teams currently with losing records the rest of the way. (For comparison, four of Philadelphia's final five games come against Miami, Washington and the Giants).

Most of these games should be close, which puts a premium on trusting a place-kicker, but it's difficult to trust Brett Maher, who made a 62-yard kick last week but missed a 40-yarder. Turnover margin is a big issue as well. QuarterbackDak Prescott is on pace for the most interceptions of his career (he has six in six games), and the Cowboys' defense does not take the ball away (tied for fifth-worst with five takeaways).

Which under-the-radar player will make a difference Sunday?

McManus: Linebacker Kamu Grugier-Hill. He looked poised for a breakout season before spraining his MCL in August. It has been a slow climb back for the 25-year-old, but his snaps and production have steadily increased since he returned in the Week 4 win at Green Bay. The Eagles need him after a tumultuous week at the position in which they released Zach Brown and lost Nigel Bradham to an ankle injury. Grugier-Hill's most productive day as a pro came against Dallas in December, when he posted a career-high 10 tackles.

Archer: Wide receiver Michael Gallup, though I don't know how under the radar he is with two 100-yard receiving games in his first four games. It's hard to imagine that the Eagles would allow Cooper to do to them this season what he did to them at AT&T Stadium last season (10 catches, 217 yards, three touchdowns), but his availability is in serious question. That means Gallup will have to be a playmaker after dropping three passes last week. If Philadelphia defensive coordinator Jim Schwartz wants to pressure Prescott, the Cowboys have to attack, and Gallup can make plays down the field and can go up and over corners.

What happens to the loser of this game?

Neither team seems capable of sprinting away from the pack, so a loss here is not catastrophic, but stats don't lie.

Archer: The Cowboys would not be out of the division race by any means, but it would make the Dec. 22 rematch at Lincoln Financial Field a must-win. The Cowboys would likely have to slog their way to the postseason with a 10-6 record as either a division winner or a wild-card team and not benefit from a first-round bye.

It would also mean they faced three big conference tests in the first seven weeks and lost them all to New Orleans, Green Bay and Philadelphia. A loss would almost kill the Cowboys' tiebreaker opportunities. That's a lot to overcome.

Which team is more likely to rule the division beyond 2019?

McManus: The Eagles. Philadelphia has the NFL's third-oldest 53-man roster, as of late September, with an average age of 27.1 years. Eight of the Eagles' original starters are 30-plus, and four more are 29 years old. They're starting to look like a group that has been worn down over time. Much of their future success will be reliant on general manager Howie Roseman's ability to draft well the next two seasons to give this team an infusion of young talent.

A top-end quarterback can cure a lot, though. Wentz is the division's best QB, and as long as that remains true, Philadelphia will be positioned to win the NFC East on a yearly basis.

The Giants have a chance to close the gap fairly quickly, given the signals Daniel Jones has been emitting from New York, but for now, it's a two-horse race between the Eagles and Cowboys, and I'll put my money on Wentz over Prescott.

Archer: If we're talking a coaching perspective, I would go with Philadelphia because there appears to be a little more stability there. If the Cowboys do not make it to the NFC title game, then there is a chance coach Jason Garrett will not return -- he's in the final year of his contract. A large number of Cowboys coaches are also in the last years of their deals, so there could be a big changeover. The Eagles don't seem to have that issue.

On the player side, the age of the Cowboys' core is much younger. The Eagles have seven starters who are 30 or older this season. The Cowboys have two veterans in tight endJason Witten and linebackerSean Lee. Cowboys owner and general manager Jerry Jones sees this roster as one that can compete for a Super Bowl for years to come. 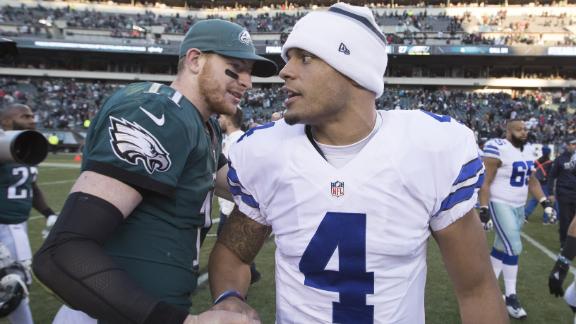 Which team should be more worried: the Eagles or Cowboys?
Domonique Foxworth and Bill Barnwell disagree about which NFC East contender is in more trouble 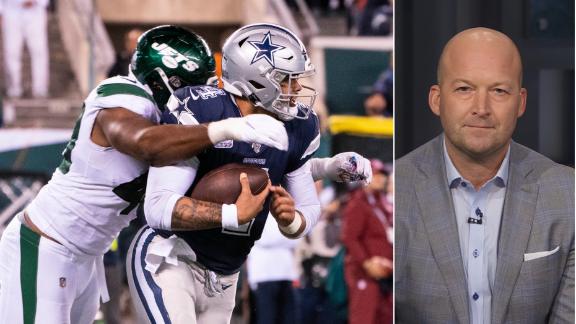