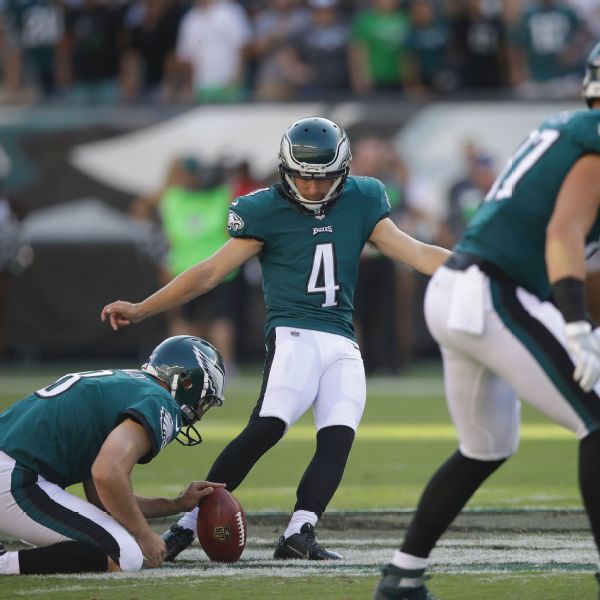 PHILADELPHIA -- It didn't dawn on Carson Wentz until after all the celebrating had died down.

The Philadelphia Eagles quarterback, miked up and caught up in the moment, told teammate Kamu Grugier-Hill on the sideline that if rookie kicker Jake Elliott nailed the game-winning 61-yard field goal against the New York Giants, he'd give Elliott his game check.

Well, Elliott hit it, pandemonium ensued, and eventually Wentz realized what he said while wired for sound.

"I knew I was miked up, but I didn't really think about it during the game at all, and then afterwards I'm like, 'Oh, I said that, didn't I?' But it was all good," Wentz said. "I thought it was funny."

Wentz didn't try to run away from it, sending the video over to Elliott the next morning. The message attached?

"It was just kind of an emoji freaking out," Elliott said. "Like, 'I made a mistake there.'"

Wentz earns $31,765 a game -- not exactly pocket change. After talking with Elliott, though, they decided to do some good with the situation and will donate a yet-to-be-determined amount to the charity of Elliott's choosing.

"We'll give back as much as we can," Elliott said.

Some in the Eagles locker room, though, think that money should go straight into the rookie's pockets.

"Oh, nah, he's gotta give it directly to him. I would have wanted that money in my bank account," safety Malcolm Jenkinssaid. "What was it, 31 grand? I'll go out there and try [to kick.]."

"I know [a worthy cause]," Jenkins added with a laugh, "My daughter's college fund."

Wentz and Elliott, though, are content with the decision to give back.