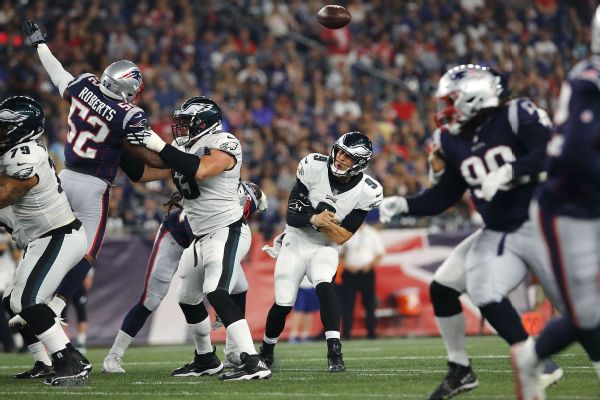 Foles suffered the injury during the second quarter of Thursday's preseason game against the New England Patriotsin Foxborough, Massachusetts. The source told Schefter that Foles "should be fine."

Patriots defensive end Adrian Clayborn beat tackle Halapoulivaati Vaitai and hit Foles while he was stepping into his throw, knocking the ball loose. Linebacker Ja'Whaun Bentley scooped up the fumble and ran 54 yards for a touchdown.

Foles grabbed his throwing arm as he went to the turf. He was evaluated inside the trainers tent before returning the sideline.

"It was just the shoulder. It just sort of got jarred in a funny way as I was following through," Foles said. "But it feels good. We'll check it out tomorrow more thoroughly."

Coach Doug Pederson indicated Foles would have played one more series had he not been hurt.

Foles said he would get treatment on the shoulder Friday in Philadelphia. He is "optimistic" about how things will play out.

"I'm going to do everything I can to get back on the field and hopefully practice the first day we get back practicing [Sunday]," he said, "and be ready to roll."

Carson Wentz is on the mend from a torn ACL and LCL. He still needs to be cleared for contact by the medical staff and said "it's going to be close" when it comes to his availability for Week 1 against the Atlanta Falcons. The uncertainty surrounding Wentz's status makes Foles' health all the more important.

"I'll go in tomorrow and get treatment on it and sort of go from there," Foles said. "It feels all right, it feels pretty good. Hopefully there's no issues."