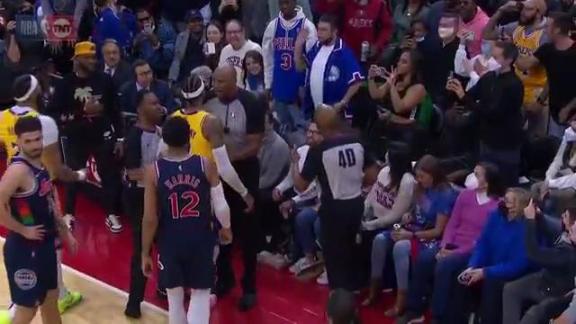 PHILADELPHIA -- - Meek Mill crashed a 76ers press conference and gave a shoutout to his favorite team. The rapper capped his impromptu remarks with "good win!"

The 76ers got it even with Joel Embiid having an off night by his own MVP-type standards.


Embiid had 26 points and nine rebounds, leading Philadelphia to a 105-87 victory over a Los Angeles Lakers team playing without LeBron James on Thursday night.

"I was not very good tonight, so I was happy my teammates were able to pick me up," Embiid said.

He still had a pretty good game. This is what counts these days as a subpar game for Embiid: He missed all five 3-pointers and was only 8 of 13 from the free throw line. He was 9 of 20 from the floor.

"He's doing everything for us on and off the floor," coach Doc Rivers said.

At least he had teammates to pick up the slack. Tobias Harris scored 23 points and Ty Maxey had 14 points and 10 assists.

Anthony Davis scored 31 points and grabbed 12 rebounds for the Lakers.

The 37-year-old James is day to day with a sore left knee. James is second in the league in scoring at 29.1 points per game, on pace for his highest average since the 2009-10 season, and has scored at least 25 points in 18 straight games.

"He's a big part of what we're trying to do," Davis said. "It sucks not having him but it gives us a chance to see what we have without him. We definitely want to take advantage of these moments."

With James absent, Davis kept the Lakers competitive in his second game back after missing 17 with a sprained left knee. He hurt his right wrist on a fall in the first half and needed a quick trip to the locker room for an X-ray and to get taped up.

If the wrist bothered him, it sure didn't show.


Davis went of 10 of 13 in the first half - the Lakers made 20 buckets - for 23 points. He even blocked Embiid's jumper, then came right down and hit one over the All-Star center. And Davis drew a foul against Embiid on the play.

Davis, though, can't carry the Lakers alone and the Lakers looked lost at times without him. Russell Westbrook turned the ball over late in the first half when his pass to seemingly nobody went out of bounds. He slammed a roll of tape left on the stanchion with TV equipment.

Davis dunked late in the third to keep the Lakers within nine, then had a twisting block on the baseline of another Embiid shot.

"It's always fun playing against another great big," Davis said. "He's been on a tear. Putting the team on his back. We knew it was going to be a tough matchup going in."

Davis did his part to neutralize Embiid.

Not many others have come close.

Embiid, the first Sixer voted a starter in at least five straight All-Star Games since Hall of Famer Allen Iverson, had his streak of four games with at least 35 points and 10 rebounds end. Embiid and Davis are two of only four players to hit those marks since the 1976-77 merger.

"I like to score the ball," Embiid said. "I have a score-first mentality. If they're double- or triple-teaming, I'm going to make the right play."

The durability issues that have pockmarked his career were put to rest this season: Embiid played in his 20th straight game.

76ers: F Danny Green returned to the lineup from a hip injury. ... Embiid passed Moses Malone for the 16th on the team's career scoring list.

Carmelo Anthony had fun yapping with courtside Sixers fans most of the game, until some crossed a line and two appeared to get ejected.

Anthony said "some things were said, were unacceptable." He did not reveal the comments but indicated they were racially charged. Anthony said the comments "crossed certain lines" and hoped the situation would be addressed by the Sixers organization.

The Sixers spelled Hall of Famer Julius Erving's name "Irving" when they showed him on the big screen.