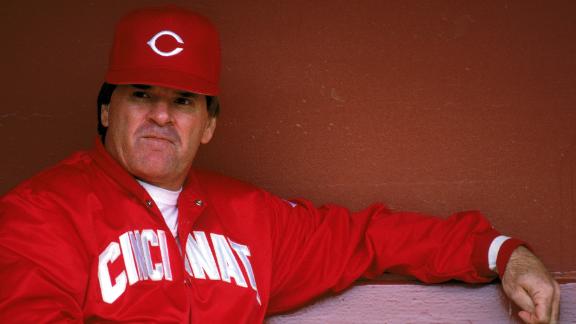 For 26 years, Pete Rose has kept to one story: He never bet on baseball while he was a player.

Yes, he admitted in 2004, after almost 15 years of denials, he had placed bets on baseball, but he insisted it was only as a manager.

But new documents obtained by Outside the Lines indicate Rose bet extensively on baseball -- and on theCincinnati Reds-- ashe racked up the last hits of a record-smashing career in 1986. The documents go beyond the evidence presented in the 1989 Dowd report that led to Rose's banishment and provide the first written record that Rose bet while he was still on the field.

"This does it. This closes the door," said John Dowd, the former federal prosecutor who led MLB's investigation.

The documents are copies of pages from a notebook seized from the home of former Rose associate Michael Bertolini during a raid by the U.S. Postal Inspection Service in October 1989, nearly two months after Rose was declared permanently ineligible by Major League Baseball. Their authenticity has been verified by two people who took part in the raid, which was part of a mail fraud investigation and unrelated to gambling. For 26 years, the notebook has remained under court-ordered seal and is currently stored in the National Archives' New York office, where officials have declined requests to release it publicly.

Rose, through his lawyer, Raymond Genco, issued a statement: "Since we submitted the application earlier this year, we committed to MLB that we would not comment on specific matters relating to reinstatement. I need to maintain that. To be sure, I'm eager to sit down with [MLB commissioner Rob] Manfred to address my entire history -- the good and the bad -- and my long personal journey since baseball. That meeting likely will come sometime after the All-Star break. Therefore at this point, it's not appropriate to comment on any specifics." Bertolini's lawyer, Nicholas De Feis, said his client is "not interested in speaking to anyone about these issues."

Dowd, who reviewed the documents at Outside the Lines' request, said his investigators had tried but failed to obtain Bertolini's records, believing they would be the final piece in their case that Rose was betting with mob-connected bookmakers in New York. Dowd and his team had sworn testimony from bookie Ron Peters that Rose bet on the Reds from 1984 through 1986, but not written documentation. Dowd also had testimony and a recorded phone conversation between Bertolini and another Rose associate, Paul Janszen, that established that Bertolini had placed bets for Rose. But Dowd never had the kind of documents that could cement that part of his case, especially in the eyes of fans who wanted to see Rose returned to Major League Baseball.

"We knew that [Bertolini] recorded the bets, and that he bet himself, but we never had his records. We tried to get them. He refused to give them to us," Dowd said. "This is the final piece of the puzzle on a New York betting operation with organized crime. And, of course, [Rose] betting while he was a player."

The documents obtained by Outside the Lines, which reflect betting records from March through July 1986, show no evidence that Rose, who was a player-manager in 1986, bet against his team. They provide a vivid snapshot of how extensive Rose's betting life was in 1986:

In the time covered in the notebook, from March through July, Rose bet on at least one MLB team on 30 different days. It's impossible to count the exact number of times he bet on baseball games because not every day's entries are legible.

But on 21 of the days it's clear he bet on baseball, he gambled on the Reds, including on games in which he played.

Rose bet heavily on college and professional basketball, losing $15,400 on one day in March. That came during his worst week of the four-month span, when he lost $25,500.

Dowd said he wished he'd had the Bertolini notebook in 1989, but he didn't need it to justify Rose's banishment. Under MLB Rule 21, "Any player, umpire, or club or league official or employee, who shall bet any sum whatsoever upon any baseball game in connection with which the bettor has a duty to perform shall be declared permanently ineligible."

But Rose's supporters have based part of their case for his reinstatement on his claim that he never bet while he was a player or against his team, saying that sins he committed as a manager shouldn't diminish what he did as a player.

"The rule says, if you bet, it doesn't say for or against. It's another device by Pete to try to excuse what he did," Dowd said. "But when he bet, he was gone. He placed his financial interest ahead of the Reds, period."

The timing for Rose, who played in 72 games in 1986, isn't great. In March of this year, he applied to Manfred for reinstatement. Dowd recently met with MLB CIO and executive vice president of administration John McHale Jr., who is leading Manfred's review of Rose's reinstatement request, to walk McHale through his investigation. On Monday morning, MLB officials declined to comment about the notebook.

In April, Rose repeated his denial, this time on Michael Kay's ESPN New York 98.7 FM radio show, that he bet on baseball while he was a player. "Never bet as a player: That's a fact," he said.

Outside the Lines tracked down two of the postal inspectors who conducted the raid on Bertolini's home in 1989 and asked them to review the documents. Both agents, former supervisor Craig Barney and former inspector Mary Flynn, said the records were indeed copies of the notebook they seized.

When the case began, it didn't look particularly enticing, Barney said. The postal inspector's office in Brooklyn, New York, had received a complaint that a man in Staten Island had failed to return goods to paying customers that he was supposed to have autographed. The man's name was Michael Bertolini, and the business he ran out of his home was called Hit King Marketing Inc.

"It was a mere 'failure to render [services]' complaint," said Barney, who is now retired. "We didn't know anything about Bertolini or his connection [to Rose]."

If the accusation was true, it would constitute mail fraud, but the agents had no probable cause to search Bertolini's house.

Barney sent an agent to drive by the address. There was a for sale sign out front, the agent told him. So Barney and Flynn, posing as a couple looking for a home, called a real estate agent and were given a guided tour of Bertolini's house. "It was such a mess. There was stuff everywhere," Barney said.

Bats, balls, books and papers were scattered all over. It looked to them as if Bertolini had been signing memorabilia with the forged names of some of the most famous baseball players in history: Willie Mays, Hank Aaron, Duke Snider, Mike Schmidt and Pete Rose. "It reeked of fraud," Barney said.

The two inspectors spotted an item that a complainant said had not been returned. That gave them probable cause to seek a search warrant.

On Oct. 13, a few days after the undercover house tour and after obtaining a search warrant, they searched Bertolini's home and found evidence that would lead to numerous convictions. But one item stood out: In a box of papers in the basement, Barney said, was a spiral notebook filled with handwritten entries.

It was immediately clear that the many notations of "PETE" in the pages represented Pete Rose.

"There were numbers and dates and -- it was a book for sports betting," Barney said. "I was taken aback."

Flynn, who said her first reaction was "Holy mackerel," said they asked Bertolini about the notebook.

"He wasn't forthcoming with much information," she said, "but he did acknowledge to me it was records of bets he made for Pete Rose."

Bertolini offered his take on the raid during his sentencing hearing in U.S. District Court in Brooklyn six years later (he served 14 months for tax fraud and a concurrent assault sentence):

"I got a call at the place where I was working at the time from my brother, and he says, 'You should come home.' He said, 'There's a bunch of government people here, and they're here for you.' At the time, I think it was Mary Flynn of the postal inspector's office who got on the phone and said, 'We're here,' and she told me why and so forth. They took any records I had whatsoever, and they took different personal belongings and memorabilia from my home."

Although the 1989 raid on Bertolini's house received immediate news coverage, nothing about a betting book became public for five years. After Bertolini pleaded guiltyand received a federal prison sentence, Sports Illustrated, The New York Times, ESPN and other news organizations filed freedom of information requests with the U.S. Attorney's Office seeking access to the book. All were denied on the grounds that the notebook had been introduced as a grand jury exhibit and contained information "concerning third parties who were not of investigative interest."

Last year, Outside the Lines again applied unsuccessfully for access to the notebook but learned it had been transferred to the National Archives under a civil action titled "United States v. One Executive Tools Spiral Notebook." Two small boxes of other items confiscated in the postal raid on Bertolini's house went too, including autographed baseballs and baseball cards.

In April, Outside the Lines examined the Bertolini memorabilia kept in the National Archives' New York office, but the betting book -- held apart from everything else -- was off-limits. The U.S. Attorney's Office internal memorandum from 2000 that requested the spiral notebook's transfer said Bertolini's closed file has "sufficient historical or other value to warrant its continued preservation by the United States Government."The memorandum listed among its attachments a copy of the notebook, but a copy of the memorandum provided by the National Archives had no attachments and had a section redacted.

"I wish I had been able to use it [the book] all those years he was denying he bet on baseball," said Flynn, the former postal inspector. "He's a liar."

To Dowd, one of the most compelling elements of the newly uncovered evidence is that it supports the charge that Rose was betting with mob-connected bookies through Bertolini. Dowd's investigation had established that Rose was hundreds of thousands of dollars in debt at the time he was banished from the game.

"Bertolini nails down the connection to organized crime on Long Island and New York. And that is a very powerful problem," Dowd said. "[Ohio bookie] Ron Peters is a golf pro, so he's got other occupations. But the boys in New York are about breaking arms and knees.

"The implications for baseball are terrible. [The mob] had a mortgage on Pete while he was a player and manager." 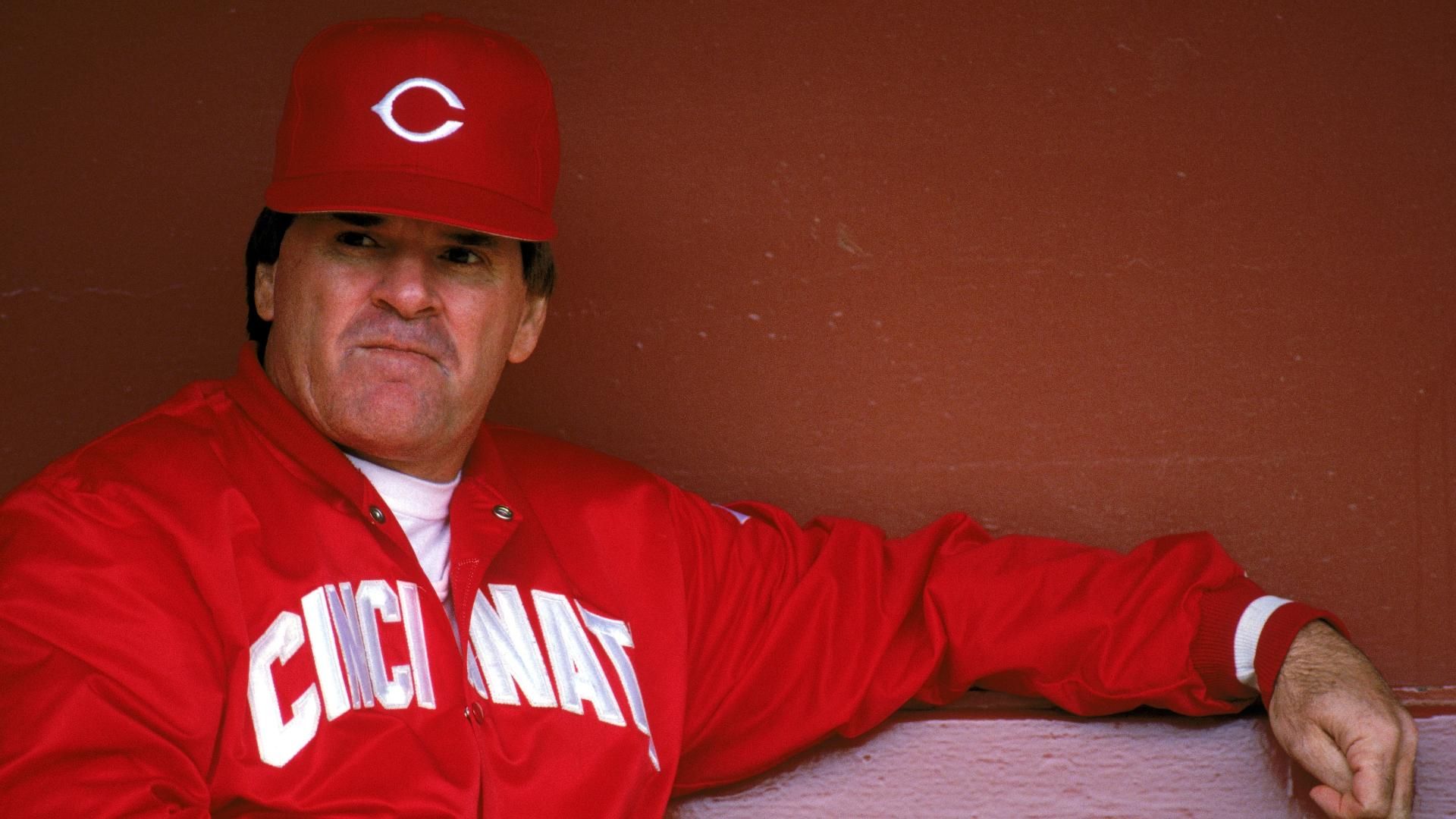