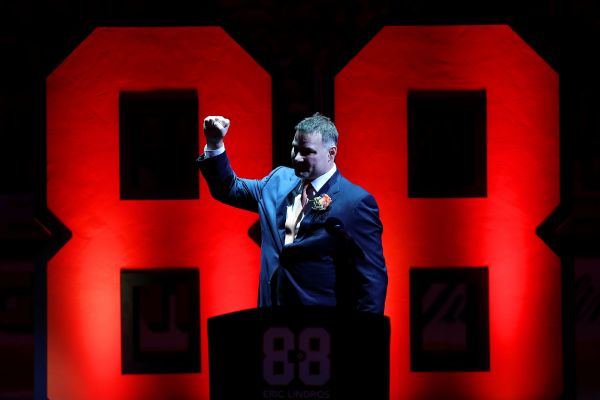 PHILADELPHIA -- Nearly 17 years after a bitter breakup, the Philadelphia Flyers retired Eric Lindros' jersey on Thursday night in a stirring tribute to the Hall of Fame center.

No. 88 was raised to the rafters of Wells Fargo Center, a facility Lindros helped open in 1996, before the Flyers played his hometown Toronto Maple Leafs.

"Very blessed that I could've played in Philadelphia," Lindros said as the crowd roared.

Combining size, skill and strength, the 6-foot-4 Lindros averaged a franchise-record 1.35 points per game in Philadelphia from 1992 to 2000. Lindros won the Hart Trophy as league MVP in 1995 after leading the NHL with 70 points in the lockout-shortened season. He helped the Flyers to the Stanley Cup Final two years later, where they were swept by Detroit.

"These are one of those days you take for the rest of your life. It's a special moment," Lindros said before the ceremony. "You feel lucky."

In an elaborate 23-minute, on-ice tribute that included video highlights on a giant four-sided projector and gifts, Lindros was surrounded by trophies he won with a lighted, orange No. 88 serving as a backdrop.

Orange and black souvenir T-shirts were placed on seats so fans on both sides of the ice traced out the No. 88 in black. His number was painted into the ice behind both goals and banners that included "There's only one 88" hung from the upper deck.

It was a feud with Clarke, then the Flyers general manager, that led to his ugly exit from Philadelphia. It stemmed mostly from the treatment Lindros received for a number of concussions and a collapsed lung, with his parents often criticizing the Flyers' medical team.

After a shoulder-to-jaw hit by New Jersey's Scott Stevens in the 2000 playoffs, Lindros missed all of the 2000-01 season because of post-concussion issues and a contract dispute with Clarke. His trade demand was granted in August 2001 when he was sent to the New York Rangers.

He later played for Toronto and Dallas before retiring in 2007, finishing with 372 goals and 865 points in 760 games.

Lindros was asked if back in 2001 he could have envisioned his number being retired in Philly.

"No, you?" Lindros said, drawing laughter. "No, what happened, it was no doubt difficult and frustrating."

Lindros, Clarke and the Flyers eventually patched things up with the help of Flyers president Paul Holmgren. Lindros appeared at an outdoor alumni game in Philadelphia in 2012, and Clarke pushed for Lindros' 2016 induction into the Hockey Hall of Fame while serving on the selection committee.

"It was great for Bob to say what he did. It was special," Lindros said. "We disagreed on some things, no doubt, but when it came down to hockey and if winning is it, I can't question Bob and his desire."

Lindros skated on the Wells Fargo Center ice in the early afternoon with his wife and 3-year-old son, the oldest of their three children.

Lindros' parents, Carl and Bonnie, attended the ceremony, along with his sister and brother Brett, who spent two seasons with the New York Islanders before a concussion ended his career in 1996.

Lindros has become a vocal advocate for concussion awareness and research.

"No, we're nowhere near where we need to be," he said. "And a lot of it stems from the research dollars."

Clarke attended the ceremony along with Legion of Boom linemates John LeClair and Mikael Renberg and other teammates.

"You're back where you belong," Holmgren told Lindros, "and this time it's forever."

The Flyers acquired the London, Ontario, native in a blockbuster trade with Quebec in 1992 that included Peter Forsberg and Ron Hextall, the current Flyers GM. The first and only Philadelphia player to wear No. 88, the "Big E" made his NHL debut at age 19 and became the franchise's youngest captain two years later.

"A dynamic, dynamic player in the game," Maple Leafs coach Mike Babcock said. "It's very special. Through all of the things he went through in Philly, they're going to honor him and they should."
Report a correction or typo
Related topics:
sportsespnnhljerseyhall of fameretirementno 88philadelphia flyerseric lindos
Copyright © 2022 ESPN Internet Ventures. All rights reserved.
TOP STORIES
Building owner charged in fire that led to firefighter's death
Witness: Trump grabbed steering wheel, demanded to go to Capitol
Carry permits expected to skyrocket in NJ after SCOTUS ruling
Neighbors tired of pickleball noise: 'It's as loud as a rock concert'
Epstein associate Ghislaine Maxwell sentenced to 20 years in prison
Off-duty corrections officer robbed, carjacked in Philadelphia
SCOTUS abortion decision: Women of color will likely be most impacted
Show More
Bryce Harper set for thumb surgery, Phils hope he plays this year
Injuries reported after crash involving Philly police vehicle
Black bear dies after getting stuck inside hot car in Tennessee
$6 billion will be infused into Navy Yard to make it a 'destination'
Grandmother of Uvalde school shooter released from hospital
More TOP STORIES News