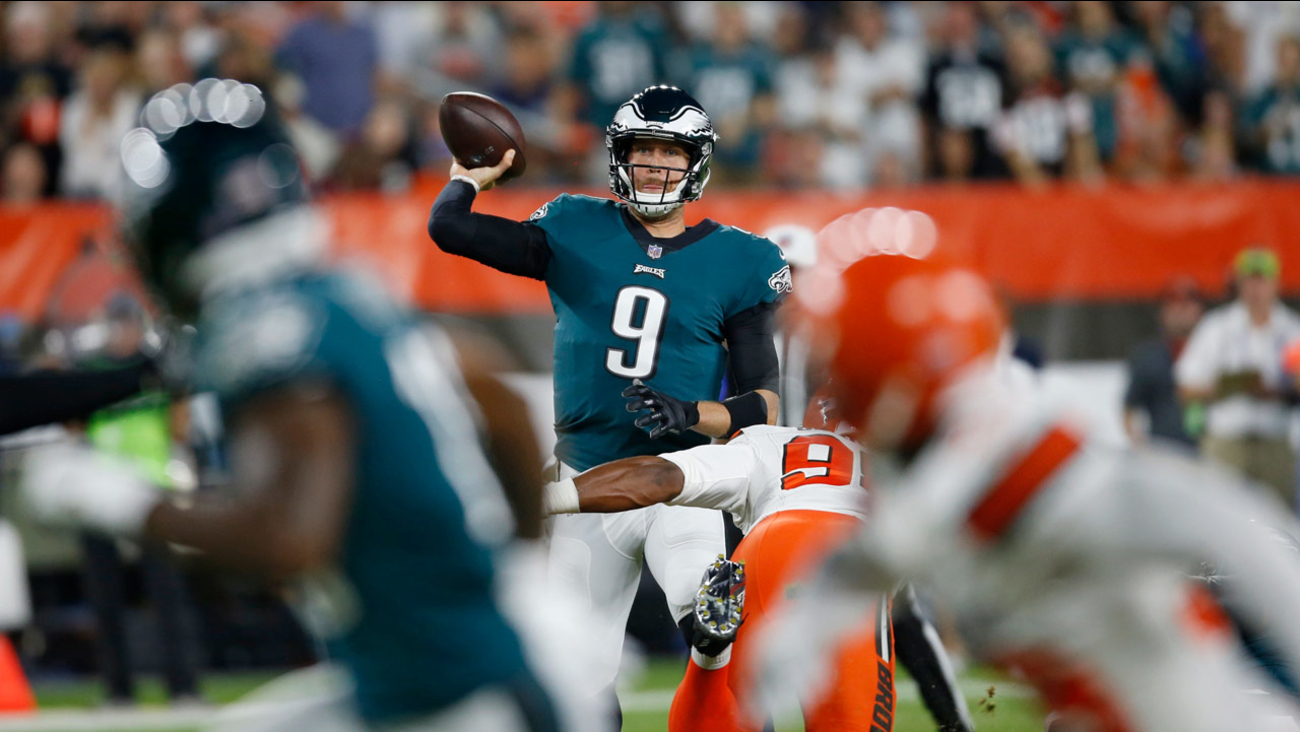 CLEVELAND -- The Super Bowl MVP has lost his magic touch. Nick Foles isn't playing like himself.

Foles threw two interceptions in the first half and Philadelphia's starting offense - missing some key players - struggled again while waiting for quarterback Carson Wentz to return and the Eagles were beaten 5-0 on Thursday night by the Cleveland Browns.

Foles, who replaced an injured Wentz last season and led the Eagles to their first Super Bowl title while becoming a cult hero, continued his ugly preseason. He did complete 13 of 17 passes for 127 yards, but he threw the picks and was sacked three times, stripped for a fumble and downed for a safety.

His overall statistics were better than a week ago against New England when he hurt his shoulder, but he made two poor decisions and hasn't led the Eagles' first-team offense to a point on 14 drives over three games.

"There are times where I'm feeling good, but I'm making some mistakes," Foles said. "It's as simple as that."

The Eagles (0-3) committed four turnovers, allowed seven sacks and missed a field goal. With just two weeks left to get ready for their opener against Atlanta, the Super Bowl winners have work to do.

At this point, Foles, the unlikely hero from last season, will likely start the season as the Eagles wait for Wentz, who recently began working in 11-on-11 drills, to be cleared following knee surgery.

"I don't want to single out one player, so don't put this all on Nick," Pederson said. "I'm disappointed in the offense. It's not what you want obviously in the third preseason week. We still want to evaluate and make sure we got the right guys in the right spots."

Cleveland had a familiar quarterback scare.

Starter Tyrod Taylor injured his left hand in the first quarter, and the sight of him heading to the sideline sent a shiver through fans in FirstEnergy Stadium. Rookie Baker Mayfield replaced him for two series before Taylor returned. Cleveland's starter finished 11 of 16 for 65 yards.

Taylor stayed in the locker room after halftime to receiver treatment. He left the stadium before speaking with reporters.

"I was very concerned, but I wouldn't have put him back in if I didn't think he was fine," Jackson said. "We'll continue to look at it and see where we are going into next week."

Mayfield, the No. 1 overall pick, played the entire second half and went 8 of 12 for 76 yards and an interception. He was checked for a concussion in the second half.

"Not my best game by any means," Mayfield said. "I'm disappointed in myself. I got in there with the first team and I've got to get the ball out quickly. Not my best game at all."

The Browns intend for Taylor to start this season while Mayfield develops, with the only thing that might alter the plan being an injury - something Cleveland knows all too well while cycling through 28 starting QBs since 1999.

Foles floated a long pass that safety Briean Boddy-Calhoun easily intercepted . Then, with a chance to finally score, Foles forced a throw into a crowd near the goal line and was picked by linebacker Jamie Collins.

"I'm just making mistakes," Foles said. "For me, it's just getting back into rhythm - and keep playing ball. We had an opportunity to win and made too many mistakes and that's on me. If I clean that up, we win this game."

Philadelphia's defense recorded four sacks and Cleveland's only scoring drive - before a 54-yard field goal - was for minus-1 yard.

The Eagles also stopped the Browns on four plays from the 1.

"Our defense played outstanding. They were flying around, making plays," Pederson said. "The goal-line stand was pretty impressive. That's what your want from your defense."

Eagles: Starting C Jason Kelce limped off after making a block during the opening series. He did agility and stretching drills under the guidance of the training staff and returned for Philadelphia's next possession.

Browns: First-round pick Denzel Ward will undergo an MRI after suffering a back injury in the first quarter. Ward appeared to get twisted while tackling 250-pound tight end Zach Ertz. Ward, the No. 4 overall pick, was on the field for several minutes before walking off on his own power. ... Starting S Damarious Randall did not dress because of a knee injury. He was not on the team's original "not expected to play" list and Jackson said his knee locked up during pregame warmups. ... Rookie WR Antonio Callaway did not dress after missing three practices with a groin injury.

Eagles starting safety Malcolm Jenkins remained in the tunnel during the national anthem, and defensive end Michael Bennett also was not on the field. Jenkins and Bennett have been among of the league's most outspoken players during the ongoing controversy over players expressing their political views during "The Star-Spangled Banner." Jenkins previously stood on the sideline with a raised fist to protest social injustice.

Wentz worked out on the field hours before kickoff with a group of Eagles receivers. He looked good on his drops while rifling slant routes and quick-hitters.

Browns defensive end Myles Garrett was credited with sacking Foles in the end zone for the game's first two points.

Foles lost his footing while backing up, fell to one knee and was touched by Garrett. Foles completed a pass on the play, but the Browns challenged it and were awarded a safety.

Browns kicker Zane Gonzalez helped his chances to keep his job with a 54-yard field goal. Gonzalez is competing with Ross Martin.