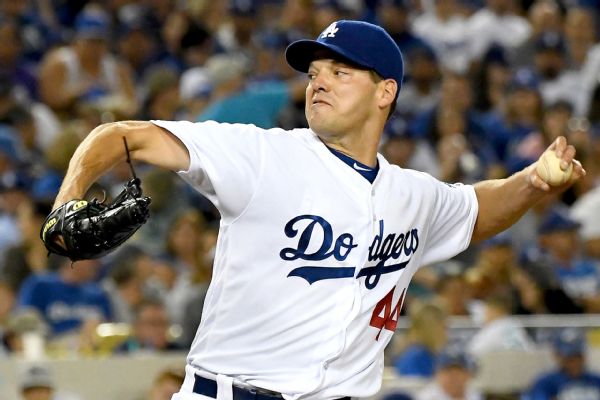 LOS ANGELES -- Pitcher Rich Hill, considered one of the top free-agent starters on the market, is closing in on a deal to return to the Los Angeles Dodgers, according to ESPN's Jim Bowden and multiple reports.

The left-hander, who was acquired from the Oakland Athletics at the non-waiver trade deadline Aug. 1, was a key for the Dodgers down the stretch and on into the postseason.

Hill, who will turn 37 in March, would be the Dodgers' projected No. 2 starter behind staff ace Clayton Kershaw. He won three of his six regular-season starts with the team and posted a 1.83 ERA. He then delivered a 3.46 ERA in three postseason starts, winning Game 3 of the National League Championship Series against the Chicago Cubs.

When acquired by the Dodgers from the A's, along with outfielder Josh Reddick, Hill was on the disabled list because of a blister issue on the middle finger of his left hand. He then developed another blister issue while rehabbing the initial problem.

He eventually made his Dodgers debut on Aug. 24, and was not scored upon during his first three starts. In fact, on Sept. 10 at Miami, Hill pitched seven perfect innings before he was removed from the game as a precaution after throwing 89 pitches. The Marlins broke up the perfect game and no-hitter an inning later against reliever Joe Blanton.

It was the second time during the 2016 season that manager Dave Roberts removed his pitcher during a no-hitter. He also removed Ross Stripling from his major league debut after 7 1/3 no-hit innings at San Francisco, with the bullpen again unable to finish off the feat.

Hill is 38-28 over his 12-year major league career, posting a 4.10 ERA in 221 career games. He was used mostly as a starter by the Cubs after making his major league debut in 2005 and before becoming primarily a reliever in 2010.