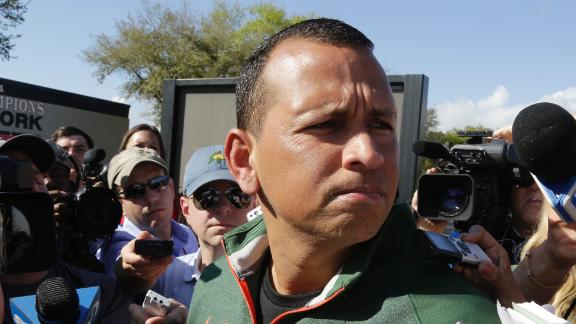 Alex Rodriguez apparently has a fan in Hank Aaron, who is looking forward to the disgraced slugger's return to baseball in 2015.

Aaron told New York newspaper Newsday that he is rooting for Rodriguez to "come back and have a great year" with the New York Yankees.

"I am rooting for him," Aaron told Newsday on Monday. "Despite all of the things that people say he had been involved in, I'm rooting for him to come back and have a great year. I am very much anxious to see what he's going to do."

Rodriguez reported to Yankees spring training Monday after serving a season-long suspension in 2014 for violating Major League Baseball's drug agreement and labor contract. The three-time MVP is owed $61 million over the final three years of his contract, but the Yankees repeatedly have stated that he will have to earn playing time this season.

Aaron, 81, acknowledged that he thinks it will be difficult for Rodriguez, who turns 40 in July, to play at a high level following his extended absence from the majors.

"I wish him well, but I just don't know," Aaron said. "When you're [away] from playing the game the whole year and go out and then have to face kids that are throwing 90 mph, it's a tough thing."

Rodriguez, who has 654 career homers, can make up to $30 million in incentives if he reaches various homer milestones, starting with tying Willie Mays' 660 for fourth place on the all-time list.

Aaron, who is second on baseball's all-time list with 755 homers, said he would not mind attending games to watch Rodriguez pursue his total.

"If I wanted to go to the game and A-Rod was playing, I certainly would go to the game," Aaron said. "I've met A-Rod, and to be honest, between him and me, he's been nothing but a friend to me. I liked him."

Rodriguez admitted in 2009 that he used performance-enhancing drugs from 2001 to 2003 while with the Texas Rangers. MLB commissioner Bud Selig suspended Rodriguez for 211 games in August 2013, citing conduct uncovered during MLB's investigation of Biogenesis. An arbitrator later reduced the suspension to the entire 2014 season.

"I'm not sitting here saying the reason that a lot of these guys are breaking records are because of steroids," Aaron said. "I can't say that because I'm not God. I don't know [if] they've been in steroids. I can't say that.

"The only thing I can say is I wish them well and that they do the best they can. They have to live and meet their own maker, not me."

Rodriguez told reporters Tuesday that he's not completely sure how he'll fare mentally this season without PEDs.

ESPNNewYork.com's Andrew Marchand and The Associated Press contributed to this report.