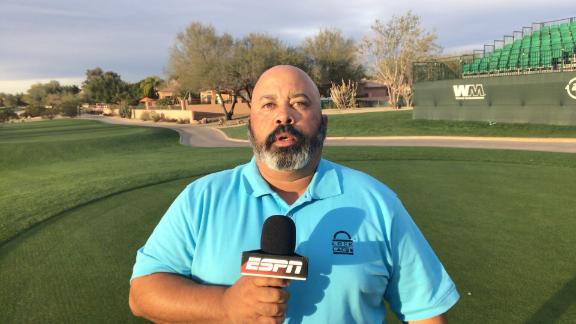 SCOTTSDALE, Ariz. -- Hideki Matsuyama won the Waste Management Phoenix Open on the fourth hole of a playoff for the second straight year, outlasting Webb Simpson on Sunday at TPC Scottsdale.

Matsuyama won with a 10-foot birdie putt on the short par-4 17th, the same hole on which the 24-year-old Japanese star finished off Rickie Fowler a year ago.

Matsuyama closed with a 5-under 66, parring the final three holes to match Simpson at 17-under 267. Simpson birdied three of the last four for a 64, the best round of the day.

Matsuyama took advantage of third-round leader Byeong Hun An's back-nine collapse. Three strokes ahead of Matsuyama, An bogeyed the first two holes on the back nine and closed with two more. The South Korean player had a 73 to finish sixth at 14 under.

Matsuyama won his second PGA Tour title of the season and fourth overall. He has won five worldwide events in the past three-and-a-half months, taking the WGC-HSBC Champions in China, two events in Japan and Tiger Woods' Hero World Challenge.

Matsuyama and Simpson matched pars on the first three extra holes, playing the par-4 18th twice and the par-4 10th before heading to 17. Simpson's drive on the 332-yard hole ended up on the right edge of the green, with a bunker blocking his path to the hole. Instead of trying to hit a wedge over the bunker, he putted and left himself a 25-footer that burned the right edge.

Simpson and Matsuyama each eagled the par-5 third, with Simpson hitting a 272-yard shot to 5 feet and Matsuyama a 254-yarder to 2.5 feet.

Louis Oosthuizen finished a stroke back after a 65. The South African birdied Nos. 14, 15 and 17, then hit in the right bunker on 18 and scrambled to save par.

Fellow former Sun Devils player Jon Rahm had a 70 to also finish at 10 under. Last week, the Spaniard won at Torrey Pines for his first PGA Tour victory.