How the new dead ball is faking out players, fans and even cameramen 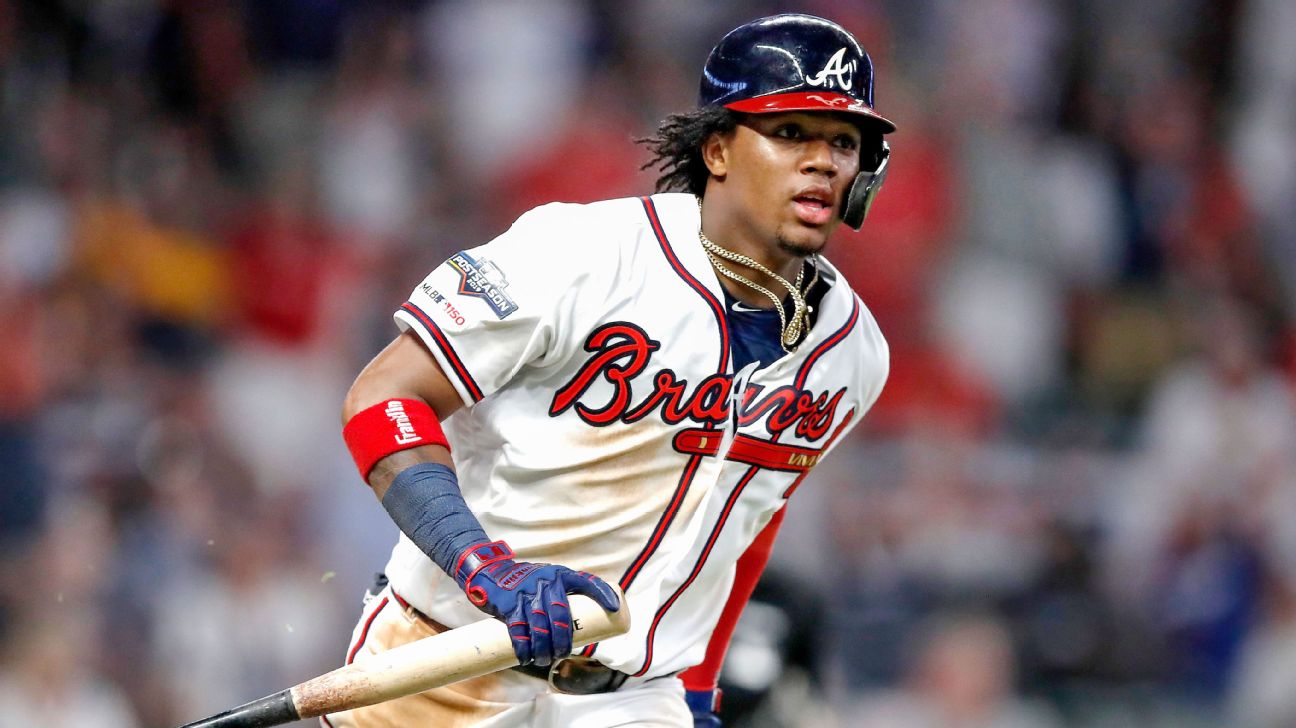 ESPN
By Sam Miller
It was a deep fly ball off the top of the wall that set up one of the loudest storylines of this postseason: Ronald Acuna Jr. "hoisted a mighty blast that wasn't quite as mighty as he believed" in Game 1 of the National League Division Series, began an early home run trot that cost him a double, then got chastised by his Atlanta Braves teammates and his "beyond miffed" manager. Acuna's presumption was, presumably, also noted by his opponents. "I was always aware when a runner made a mistake like that," TBS broadcaster Ron Darling said during the game.

All that laid the groundwork for the ninth inning, when Acuna hit one much farther, made an even more demonstrative show of celebrating it as it soared (truly, this time) into the bleachers, made the St. Louis Cardinals very mad, got himself both buzzed and drilled by fastballs later in the series, and had words with both Carlos Martinez and Jack Flaherty.

Of course, now we know something that Acuna didn't know when he hoisted that mighty blast: The postseason ball appears to have deadened since the regular season. This October ball has (for some unidentified reason) more drag, according to Rob Arthur at Baseball Prospectus, causing what had been regular-season homers to die on the warning track. Even Mike Shildt, the manager of the Cardinals, says so: His analytics team, Shildt said, estimates that balls are losing about 4.5 feet of carry.

Add 4.5 feet to Acuna's fly ball and he's trotting peacefully around the bases as the hero, a beloved young superstar instead of clubhouse tsk-tsk magnet. Acuna, presumably, knows what a home run feels like, and that felt like one. He just didn't know that the sport he'd played all season had suddenly changed. He wasn't shirking. He was giving us our first clue.

There are lots of clues, if we've been paying attention. It's like everybody on the field just walked out of a time machine, reacting to October 2019 technology with the wide-eyed disbelief of people calibrated to September 2019 physics. We rewatched every fly ball over 330 feet this postseason, and the reactions tell the story.

Four days after Acuna's long single, Paul Goldschmidt hit a high fly ball to left field. This is where it landed:

It's the blur right in front of the front-row usher, who was fooled -- he was looking for it to land in the bullpen -- and who got a jolt when it bounced high off the edge of the padded wall. That wall isn't quite flush with the left-field wall -- there is about 3 feet of space, as you can see at the 40-second mark in this video -- but it's safe to say, from the steep angle at which the ball was descending, that Goldschmidt's home run was very nearly Nick Markakis' to carry back to the dugout.

Now check out Goldschmidt's trot on the play: He swings, he pauses a brief moment to admire his mighty blast, then he puts his head down and starts a casual jog to first base. Here's how casual: It took Acuna 6.2 seconds to jog to first on his controversial not-quite-a-homer trot; it took Goldschmidt 6.43 seconds. He had the trot of a hitter who hit one 15 rows deep, of a hitter who was extremely confident in his trot. And he was right, but ... eek! Three feet! Wouldn't that have been awkward if it had come up 3 feet shorter and stayed in the yard: Goldschmidt would have had to get a talking-to from his manager. Goldschmidt would have had to be publicly scolded by his teammates!

How, you might wonder, does a center fielder even get in that position, diving in on a ball that was hit just short of the warning track? Simple: He sees a ball smashed at a home run velocity (or close to it), turns to run deep where he thinks he might have to leap for the ball, without realizing that all the baseballs this postseason have been soaked in milk. Then he corrects awkwardly to try to make the catch.

This one instance could be explained as just one fielder taking just one bad route. But there have been a bunch of these this postseason, in which a fielder ends up coming in on a ball that lands 396 feet from home plate. They're not all awkward like this one, but check out Michael Taylor running to the wall, appearing prepared to make a leap at the wall, and then realizing he needs to circle in and catch the ball at the edge of the track. Or Tommy Edman going almost to the wall and then taking eight steps in. Or Adam Eaton, diving horizontally along the warning track while reaching in to catch a ball that he overestimated. That one actually is awkward like the first one, but presume it's not Eaton's fault. Outfielders, too, know what 2019 home runs look like off the bat.

Unlike Acuna and Goldschmidt, teammates do not get to feel how the ball comes off the bat. They have to rely on the sound of the contact, the sight of the trajectory, their experience watching fly balls that their teammates hit -- and, in this case, Smith's own communication. It's a little hard to judge Smith's reaction in its entirety -- the live shot of him cut away before he had discarded the bat, and the replay starts only as he's releasing the bat, without perfect continuity -- but we know he flipped his bat:

And we think, based on the center-field shot of him winding up to flip the bat, that his first instinct was to launch his bat onto a space expedition to find Jose Bautista's bat, last seen heading toward the Andromeda galaxy. Will Smith hit 15 home runs this year. He's generally an authority on what those feel like, and he was very excited by the fly out he hit.

Some pitchers don't turn around on deep fly outs. It's a power move. Some pitchers don't turn around on home runs. It's a frustration and shame move. It's hard to know, then, whether Twins right-hander Tyler Duffey knew this ball was going to end up at the warning track, not over the wall -- especially because Duffey usually turns and looks at both home runs and deep fly balls, though he continues watching only the latter.

But there's a moment when I think it is strongly suggestive that Duffey thinks this one is gone. Giancarlo Stanton hits the ball. Stanton doesn't move; he stares at it, bat upright, assessing. Duffey stares straight ahead, assessing in his own way. He might be watching Stanton, or the crowd, or just listening, for clues. And the moment comes at 0:05 in this clip, when one kid in the front row raises his right hand and points, another goes "ooooooohhhhh" and shoots out of his seat, and a third one gets a big wide grin.

At that moment, Duffey's shoulders slump slightly, his head turns about 10 degrees to his left, and his posture seems to go groooooan. I could be wrong here -- Duffey might just have been mad to have allowed a sacrifice fly -- but this postseason has been full of pitchers with panic in their eyes, whipping around in distress to track fly balls that ended up on the warning track. Here's Julio Urias jumping up and down three times. Here's Daniel Hudson, scrunching up his legs agitatedly. Here's Sean Doolittle, unwilling to look at first, before realizing that air resistance is his friend and that deep fly outs are actually the best highlights in a home run era.

Fans always overreact to fly balls, obviously. We go to baseball games to watch gods, and when Zeus flings a lightning bolt we expect he's going to hit his target, not mumble an apology after missing short. So sure, when Acuna hit this fly ball to the warning track the fans in St. Louis had concerns.

But something different is happening in the crowd shot I'm about to show you. If you think there's a monster under your bed, you have a furrowed, stressed-out, timid look. But when you look under the bed and you actually see a monster with snakes for hair, you get a very different look. These people saw Acuna fly out to the warning track and, because they thought this was 2019 and not 2015, they turned to stone:

These fans knew that the ball was hit like a home run, and they were right. They didn't know that we live in a simulated universe that is undergoing constant maintenance.

As a cameraman, the upper-deck fly ball has to be the moment you wait for: the one chance to rise beyond the little green township at ground level and stretch the lens toward that expansive heaven beyond the outfield walls. So when Eddie Rosario hit this fly ball, the camera first tracks the outfielder moving back in pursuit, then makes that bold decision to just go for it: It zooms in on the ball, leaves the field down below, and floats its gaze up to Row 37 or wherever Rosario's game-tying home run is going to land.

Except, but, oh no, ack, this ball is made out of rolled-up electrical tape! The camera must sheepishly retreat to show the ball hitting off the wall for a very-much-not-game-tying double. A subtle reminder that we must never, ever hope.

The broadcaster thought it was gone. There was no doubt in either my voice or the broadcaster's voice that this ball was gone, and I'm not sure levitating Andrew Miller felt very good about it either. It came up about a foot short of the warning track. The postseason balls might be made out of recycled bowling balls and sand.

Of course, that's an exaggeration. The ball isn't dead; it just isn't flying like it did in the regular season, when half the teams in the league set franchise home run records.And, incrementally, we seem to be getting used to it. When Didi Gregorius flied deep to right field in the third game of the ALCS, he didn't flip his bat in anticipation of a go-ahead homer, nor fling it down in frustration of a deep fly out. Rather, he had the posture -- as did Astros pitcher Gerrit Cole -- of a deeply uncertain and impotent observer, waiting to find out whether The Big Wheel was going to settle on 100 or 5. Still, there remain some miscalibrations, some clues that the players are not dealing with familiar physics yet. When Yankees pitcher Tommy Kahnle allowed a deep fly ball to Martin Maldonado a half-inning later, Kahnle screamed some things he should apologize to himself for; it turned out, he had actually gotten the inning-ending out.

The good news, if you like this grounded style of baseball, is that it might stay this way for a while. The good news, if you like unrestrained dingers, is that it might not. MLB doesn't seem to know why the ball is suddenly behaving differently than it did all season, other than, as the league put it in a statement to baseball writer Ben Lindbergh, that "the drag of the baseball can vary over different time periods." So watch closely; this might all change any second, and the players might unwittingly be the first to tell us.
Report a correction or typo
Related topics:
sportsespnatlanta bravesminnesota twinsarizona diamondbacksnew york yankeesnew york metsphiladelphia phillieswashington nationalssan diego padrestexas rangersboston red soxcincinnati redsoakland athleticstampa bay rayssan francisco giantscolorado rockieslos angeles dodgersdetroit tigersmilwaukee brewerscleveland indiansmlbchicago white soxkansas city royalsst louis cardinalshouston astrospittsburgh piratestoronto blue jaysseattle marinersmiami marlinslos angeles angelsbaltimore orioleschicago cubs
Copyright © 2020 ESPN Internet Ventures. All rights reserved.
More Videos
From CNN Newsource affiliates
TOP STORIES