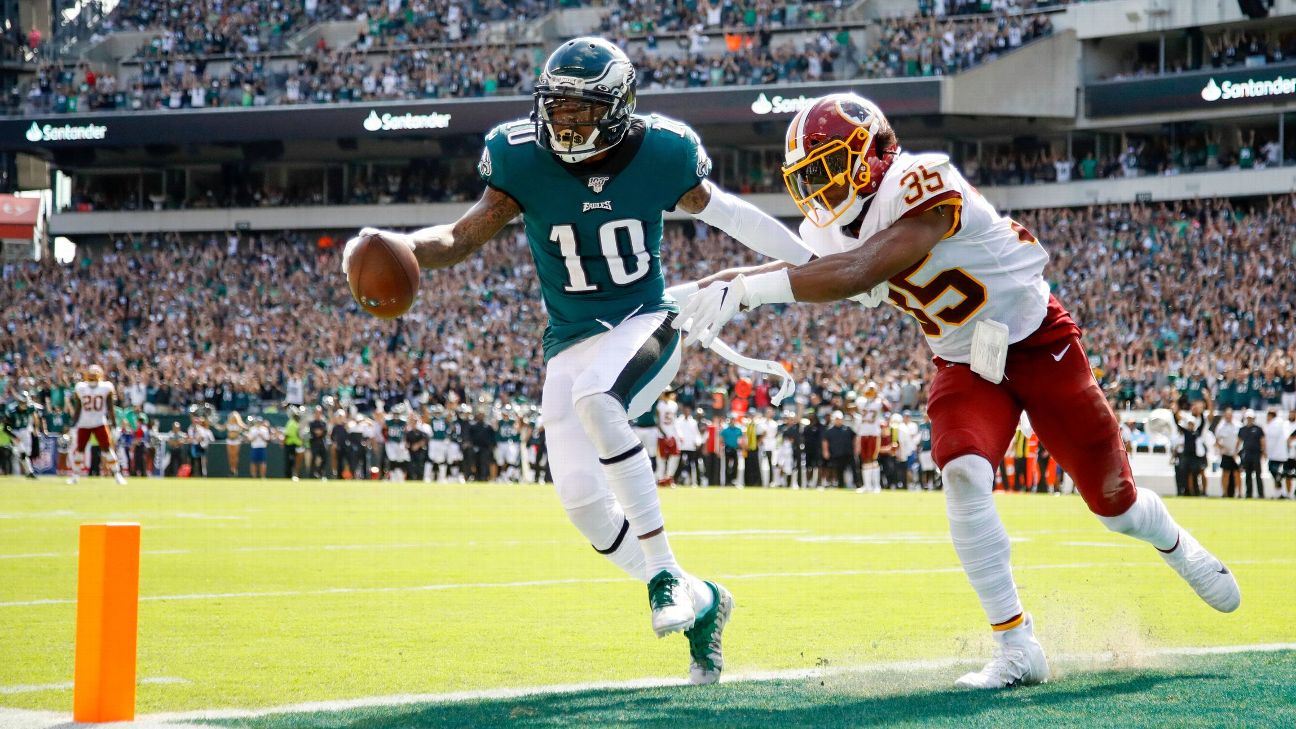 PHILADELPHIA -- After hauling in a deep throw from quarterback Carson Wentz and sprinting to the corner of the end zone midway through the third quarter Sunday, Philadelphia Eagles receiver DeSean Jackson celebrated by doing a pair of forward tumbles -- one for each of his 50-yard touchdowns on the day.

Jackson brought the thunder in his return to the Eagles, finishing with eight catches for 154 yards and scoring touchdowns of 53 and 51 yards in a 32-27 come-from-behind victory over one of his former teams, the Washington Redskins.

According to ESPN Stats & Information research, he is the first player with multiple 50-yard receiving touchdowns in a game since Odell Beckham Jr. turned the trick in 2016 against the Ravens. It's also the first time Jackson has caught multiple 50-yard TDs in a game. And he did it after breaking his ring finger last week.

"It felt great to have him out here creating the dynamic element that he does on our offense," said Wentz, who threw for 313 yards and three touchdowns. "I know this city is fired up to have him back here."

The Eagles have been desperately searching for a deep threat since then-coach Chip Kelly unceremoniously cut ties with Jackson in March 2014. They brought in players such as Torrey Smith and Mike Wallace to stretch the field but were never able to recreate the magic Jackson provided in his first stint in Philadelphia. So they brought him back by striking a deal with the Tampa Bay Buccaneers back in March.

The crowd roared as Jackson ran out of the tunnel during pregame introductions, spun in the air and then pounded the Lincoln Financial Field turf, offering a big welcome back to the electric receiver, whose previous appearance in an Eagles uniform came in January 2014.

"I just couldn't stay calm. I was overexcited like a kid before Christmas," Jackson said. "Just the reunion of me coming back and just what I mean to the city, what the city means to me and being in them green colors, just being a part of this organization and this family. It's just something special for me."

That excitement turned to frustration as Wentz and the offense sputtered early, allowing Washington to sprint out to a 17-0 lead. The first touchdown from Jackson got things going, as Wentz threw a perfect ball down the right seam late in the second quarter for a 51-yarder. Jackson moved into sole possession of second place for most 50-yard touchdowns in NFL history (30) on that play, and he trails only Jerry Rice (36).

Jackson's teammates credited not just his first touchdown, but his message in the locker room at halftime for helping to spark the turnaround.

"I just kept stressing to the boys, I've been over there before in that locker room and I just know how they are," Jackson said. "I just stressed to my teammates that I felt at halftime [the Redskins] felt they probably had the game sealed and won. And I just said we're going to go out there, and it's just going to take one play."

Jackson followed up those words by scoring on a 53-yard TD in the third quarter to put the Eagles up 21-20.

Jackson continues to punish his former teams. During his five years away from Philly, he averaged 95 yards per game and a career-best 14.23 yards per target versus the Eagles, with his team winning five of the six matchups. In two games since leaving Washington in 2017, Jackson has 13 catches for 211 yards and two TDs against the Redskins.

"They had the opportunity to keep me, I guess, and they didn't, so I get to take out whatever it is I feel on the opponent," Jackson said this past week, explaining why he has so much success against his former teams.

"I've always had the same mentality. That's the fierce competitive edge that I have: Whoever I go against, whether it's my best friend or my worst enemy, I've been trained and programmed to go about my business in an orderly fashion -- to beat your opponent and beat him bad."
Report a correction or typo
Related topics:
sportsespnwashington redskinscarson wentznflphiladelphia eaglesdesean jackson
Copyright © 2020 ESPN Internet Ventures. All rights reserved.
More Videos
From CNN Newsource affiliates
TOP STORIES