Jahlil Okafor would welcome a trade or buyout from 76ers 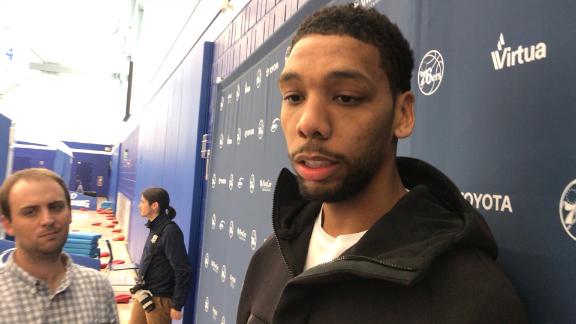 PHILADELPHIA -- Embattled 76ers center Jahlil Okafor admitted that his time with the team is likely over, saying he's fine with them not picking up the fourth-year option of his deal and that he has requested a buyout or trade from the team.

"Honestly, I did not want them to pick up my option," Okafor said at the team's shootaround Wednesday. "This is my life. This is my career, and I'm not getting an opportunity here, which is fine. The team looks great and I'm not a part of that. I want the team to do great things, but at the same time I want to play."

Earlier this week, Philadelphia decided to not pick up the fourth-year, $6.3 million option on Okafor's rookie deal, after having tried to trade him for some time. He now joins a list of players that includes Anthony Bennett (2013) and Hasheem Thabeet (2009) as other first-round picks who did not have their fourth-year options exercised.

Okafor had fallen out of the team's rotation this season, appearing in just one game against Toronto in which he played 22 minutes and finished with 10 points and nine rebounds.

A buyout would allow Okafor to test the market, potentially sign a short-term contract and then set himself up for free agency in 2018, but Okafor says that team president Bryan Colangelo has so far been resisting his request for a buyout, despite failing to find a trade for him.

"I've asked for a buyout," he said. "I had a talk with Bryan about that yesterday, just because I want to play. I know that's not being here. I know a buyout is one of the options where I get an opportunity to play elsewhere and to get on the court. But Bryan didn't think that would be a good idea because he said then they would be giving me away to a team for free, but that's pretty much where we stand right now."

He added that he would like a resolution to his situation as soon as possible.

"A buyout or a trade," Okafor said. "A buyout's not the only option. It's just, I want to get on the court. That's not happening here. It could be a buyout, it could be a trade. I just want something to happen rather quickly."

Okafor also believes that the team waited too long to try and move him in a trade.

"There were definitely deals on the table," he said. "Bryan just didn't deem they were fair, which I understand, I'm a No. 3 pick [in 2015]. But at the same time, that's what teams were offering. Me and my agent started getting the hint they weren't going to offer more, so it was whether you were going to make a move on it or not, and you waited too long and now I'm here today."

Okafor had a solid start in his first season in the league, averaging 17.5 points and 7.0 rebounds per game while being named to the league's All-Rookie team, before a knee injury cut his season short. The Sixers' plan to go big with a frontcourt of Okafor, Nerlens Noel and Joel Embiid was an awkward fit from the get-go, and Okafor saw his minutes drop to just 22 per night last season.

"When I first got here, we weren't the best team. It was just Nerlens and I. Joel wasn't healthy, so I was on the court," Okafor said. "I was playing so I didn't really have any complaints. That's all I wanted to do was just play. That's why I made such drastic changes this summer, just to get healthy and where I am today. But I'm not getting that opportunity to play."