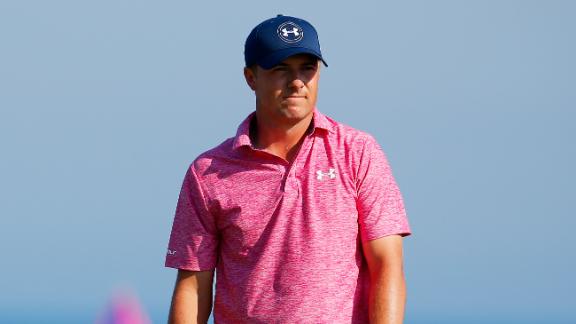 HAVEN, Wis. -- Three times this year, Jason Day has gone into the final round of a major with his name atop the leaderboard.

Twice this year, Jordan Spieth has posed with the trophy.

The two hottest golfers face off in the final group of the final major of the year at the PGA Championship, both wanting nothing more than to have their named etched on the Wanamaker Trophy. Both go into the final round relying on a different set of memories.

Day made six consecutive 3s in the middle of his round, lost momentum with a double bogey from a bunker and steadied himself with a 25-foot birdie putt on the 17th hole that sent him to a 6-under 66 and a two-shot lead over Spieth. Day was at 15-under 201.

"I'm not looking it as a negative," Day said about his close calls. "You can't, because you've got two shots and I've played phenomenal golf leading up to this. But now I've got to focus on Round 4. Everything I need to do is just make sure that I focus and prepare myself for tomorrow."

Spieth was losing patience with nine straight pars until he blistered the back nine, closed with three straight birdies and shot 65.

He was five shots behind and had two holes to play, hopeful to stay within three or four shots. He wound up only two shots behind and poised to join Tiger Woods (2000) and Ben Hogan (1953) as the only players to win three majors in one season.

Just like his bid for the Grand Slam that ended at St. Andrews, Spieth is more concerned with one trophy than a collection.

"Just to try to get my name on the Wanamaker Trophy, that's about it. That's the only history I'll be thinking of when we step on the first tee is you can hoist that trophy tomorrow and make it happen," Spieth said. "I'll go into tomorrow strictly for the history piece of trying to get my name on a different major."

The abundant sunshine and endless action Saturday might have been a preview for what could be a sensational end to the majors. While the focus is on Day and Spieth, this was hardly a two-man race.

Branden Grace holed out from the front bunker on the tough 18th hole for birdie and a 64, the low score of the third round that put him three shots out of the lead. The South African was tied for the lead with three holes to play in the U.S. Open until hitting his drive out-of-bounds onto the railroad track at Chambers Bay.

Justin Rose, despite a double bogey on the fourth hole for the second straight day, had a 68 and is three shots behind. And not to be overlooked isMartin Kaymer, the winner at Whistling Straits five years ago. He had a 65 and is four shots behind.

But in this undeniable generation shift in golf, Day and Spieth in the final pairing is compelling.

"You can never count out Jordan right now with how he's playing, especially this year," Day said. "He's just full of confidence right now. So with my confidence level and his stellar play right now, I feel like it's going to be an exciting finish tomorrow."

Spieth, even with a Masters and U.S. Open title in hand, still has a chip on his shoulder the way he lost his bid at St. Andrews. He was tied for the lead with two holes to play and finished one shot out of a playoff at The Open.

"When I think of this being the last major of the year, it's a little bit of a sad feeling because I really, thoroughly enjoy playing in majors," Spieth said. "You want to make the most of it, even though ... we've won two this year.

"So you look at it as a single major, as a chance to win this major, and there's enough fight in us to finish this one off tomorrow, I believe."

Looking determined as ever, in control of his swing and putting beautifully, Day was 6 under over a six-hole stretch in the middle of his round. That included an eagle on the 11th hole, where he hit his drive with such force that he hit pitching wedge to 15 feet.

One swing changed everything.

He tugged a 5-iron into a bunker left of the 15th green and was surprised by the amount of sand. The first shot didn't make it up the slope and rolled back into the sand, and Day wound up with a double bogey right about the time Spieth shifted into another gear.

Spieth made a two-putt birdie on the par-5 16th and hit 4-iron to 12 feet for a birdie on the 17th. His goal after a slow start was to stay close enough to have a chance on Sunday.

The volunteers were slow to post Day's double bogey on the large leaderboard on the 18th green, which Spieth couldn't help but notice as he lined up his 7-foot putt.

"I saw Jason was at 16 under, and I said, 'You've got to be kidding me. When is he going to slow down?'" Spieth said. "I saw that he was 16 under with four holes to go, thinking he could get to 17 [under] pretty easily. I need to make this to have a chance within four of the lead. And then I think he's dropped a couple of shots since then. But I did all I could do to finish off the round."

It put him in position to sweep the three American majors.

"If he goes out and wins tomorrow from him putting well, then he deserves it," Day said. "But I'm going to give him a fight."