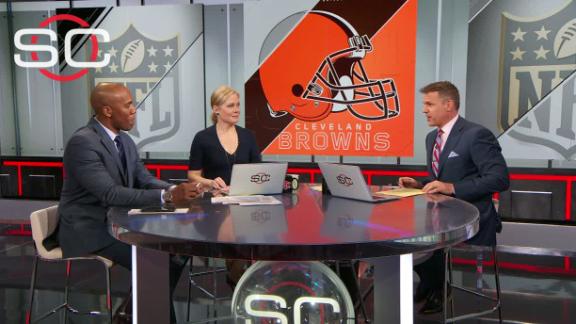 BEREA, Ohio -- Johnny Manziel was back in the building Monday.

That's the word from some of his Cleveland Browns teammates, who said Manziel was in the meeting as owner Jimmy Haslam and new director of football operations Sashi Brown addressed the team.

There were no details, though, about Manziel's whereabouts this past weekend, or why he missed Sunday morning's scheduled meeting about his concussion. USA Today had reported that Manziel was in Las Vegas on Saturday night, and the team had no clarification Monday.

"He's his own man," defensive lineman Danny Shelton said. "You can't really tell him what to do."

Manziel did not come into the locker room during the time it was open to the media.

Owner Jimmy Haslam said Manziel's future will be decided in the next few months, but his tone Sunday was far different than the full support he had offered in the past. Haslam said Sunday evening the team did not know Manziel's location at that time. Players generally stayed away from discussing Manziel's future.

"I am going to let the guys upstairs do their job," Bitonio said when asked about Manziel.

Receiver Andrew Hawkins said the only game he attended when he was in the concussion protocol was Sunday.

For the others he watched at home because he said players with concussions are not permitted on the sideline and have to watch on TV in suite.

What should Browns do with Manziel?
Louis Riddick discusses Johnny Manziel's future in Cleveland and how he would handle the situation if he was in charge of the Browns.
Related topics:
sportsespnjimmy haslamcleveland brownsconcussionfacilityjohnny manzielnflmike pettine
Copyright © 2020 ESPN Internet Ventures. All rights reserved.
More Videos
From CNN Newsource affiliates
TOP STORIES